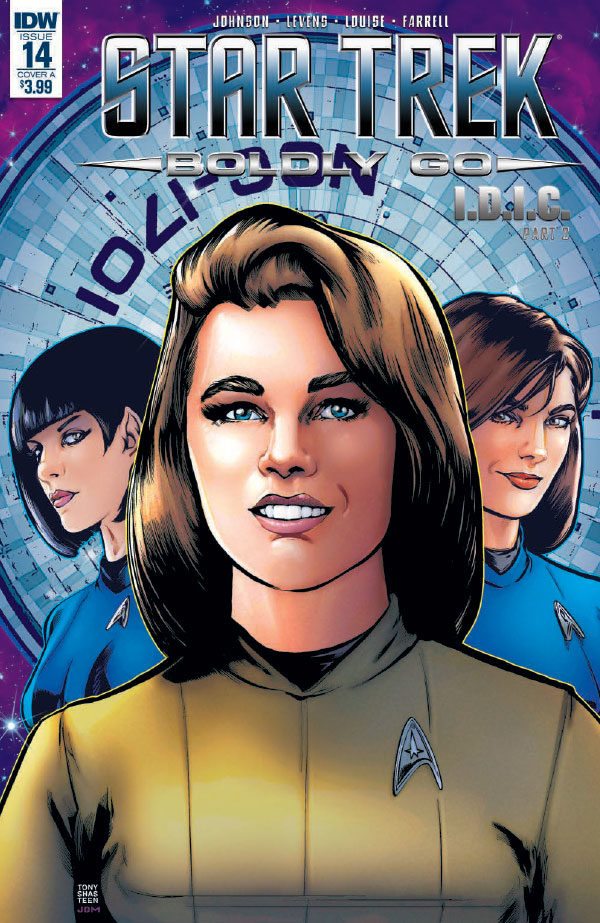 In last month’s Infinite Diversity in Infinite Combinations – or I.D.I.C. if you’re in a bit of a hurry – Mike Johnson not only started mixing up the Trek Universe’s by cross-pollinating each Trek Timeline, but he revealed he’d been secretly fanning the embers of a story-line from three years past, and also created a brand new timeline revolving around Captain Pike, a Klingon raised orphan Kirk and De-Vulcanised Spock.  Oh and yes, he then really went for it as he opened the floodgates to every Enterprise timeline possible.

With the U.S.S. Endeavour trying its damnedest not to strike one of the many thousands of Enterprises that have recently popped into existence, Kirk manages to open a line of communication with a familiar face, his female opposite ‘Captain Jane Tiberia Kirk’; who was last seen in Parallel Lives.  However, their chat is cut short when Orphan Kirk engages Captain Pike in battle, this is rapidly interrupted by the Android-led Enterprise.

The chaos in the stars doesn’t last long though, as selected crew members are unceremoniously removed from their ships and rudely deposited on random planets.  These range from Vulcan to a very regal house where Kirk is certainly not welcome.

Mike Johnson is having a heap of fun here and it’s clearly visible.  I can almost imagine his moments of inspiration for this story, as a Cheshire Cat-like grin appears on his face whilst he scribbles down notes, knowing he has a free rein in this universe.  I myself am loving I.D.I.C., it’s the equivalent of watching a Pit Pony running free in a field.  I’m smiling thanks to the potential energy Mike has managed to imbue into this comic book.

One of the best things is that I’ve not got a clue where the comic is taking us.  We’re at issue #2 and usually you get a faint whiff of a ‘maybe’ but currently this story is setting up some amazing pieces on the board, all making moves but we know not where or for what reason. 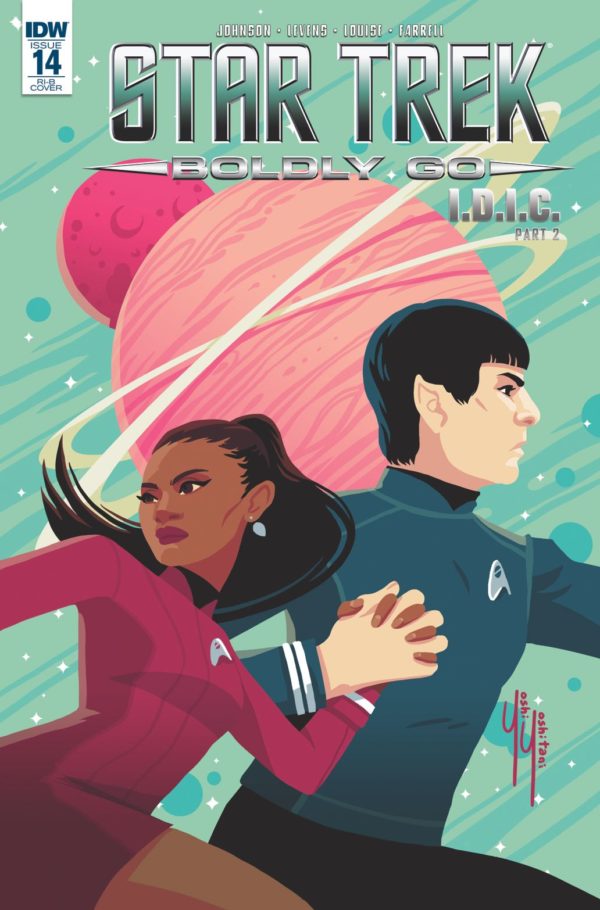 Applause has to be given to also for Megan Levens artwork which looks just as great as the story she drawing for, also an extra clap for Yoshi Yoshitani’s cover.  I love his style and to see another of his Trek covers makes me wish for a frameable version.

Infinite Diversity in Infinite Combinations is just fantastic.  Mike Johnson is making sure this Six Parter is going to be remembered for a longtime.