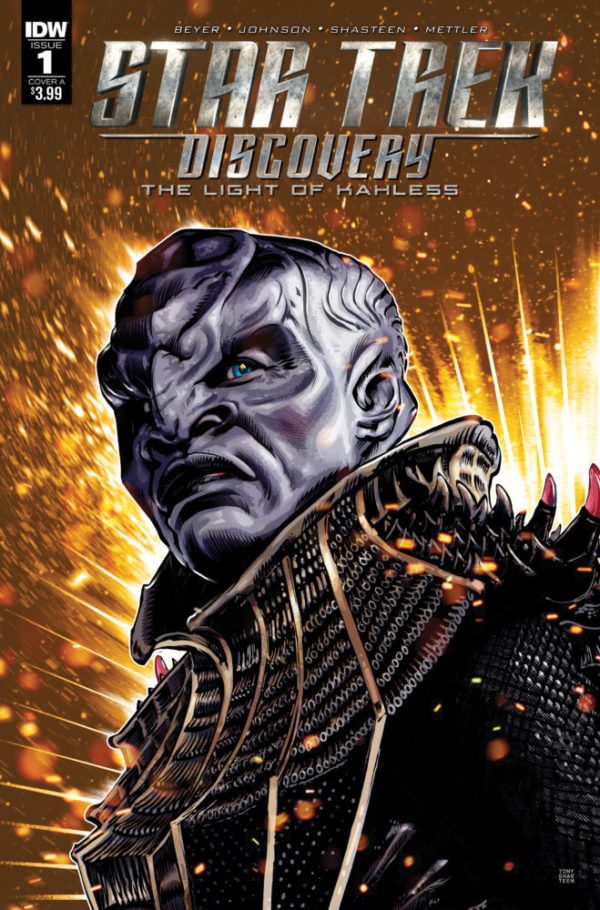 Warp into adventure with this new comic book series that ties into the new Star Trek television show premiering in late September on CBS All Access in the U.S., the Space channel in Canada and Netflix throughout the rest of the world! Be prepared for action, adventure, and Star Trek at its best!

Star Trek: Discovery “The Light of Kahless” is the first in a brand new series of comics from IDW Publishing, running alongside the new Trek TV show of the same name.  Issue #1 is penned by Trek novelist Kirsten Beyer (The Eternal Tide, Distant Shores) and longtime Star Trek comic book writer Mike Johnson.

Issue#1 takes a leaf from the TV series, as The Light of Kahless makes a rather bold manoeuvre by featuring neither sight nor sound of the show’s flagship.  Instead this opening story focuses on the character development of the shows Klingon antagonists T’Kuvma, J’ula and of course L’Rell who is relaying our opening tale – about a much younger T’Kuvma – to a rather browbeaten Voq.

A young T’Kuvma is being chased through the ancestral lands of House Girjah – once part of the High Council and now a lowly Klingon House, doing all it can to retain its remaining land.  T’Kuvma isn’t at this time a mighty warrior, as we see him battered by his brothers before he escapes into a forest of ripping thorns and it’s here he finds the Sarcophagus, a.k.a. “Ship of the Dead”.  However, he’s not the first of his family to find it, as his sister J’ula along with the descendants of the House of Girjah also occupy this mighty vessel.

With talk of Great Houses, the High Council, Kahless and Klingon teachings at Boreth, the siblings agree to keep this ship along with its inhabitants a secret and it soon becomes a place of learning for both.  However, time moves on and T’Kuvma’s uncle has plans for his young relatives.

The Light of Kahless is an extremely interesting, lore-expanding opening for this new comic book series.  Both Beyer and Johnson could have taken an easy path and dished out a “paint by numbers” slice of Star Trek for us all to get a quick fix in a one-shot blast, but they didn’t instead they’ve given us something of real worth.  This opening issue already feels like a perfect companion to what is a great new Star Trek TV series.

Partnered with this we have the artwork and colours from Tony Shasteen and J.D. Mettler, and both artists are the perfect pick for this opener.  From seeing Tony’s Sarcophagus appearing on the opening page to his finer detail of the Klingon helmet, and the murky palette of Mettler, we’ve got a great looking Klingon comic here.

Issue #1 of Star Trek: Discovery is quite excellent.  Both Kirsten Beyer and Mike Johnson have realised that the Star Trek Universe is no longer about the bridge of a Federation vessel, and with this knowledge they’ve brought something fantastic to the table.