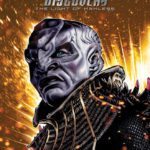 Villordsutch reviews Star Trek: Discovery #1… Warp into adventure with this new comic book series that ties into the new Star Trek television show premiering in late September on CBS All Access in the U.S., the Space channel in Canada and Netflix throughout the rest of the world! Be prepared for action, adventure, and Star Trek at its best! […]

Villordsutch reviews Star Trek: Boldly Go #6… The hit new series continues with this all-new story set after the events of STAR TREK BEYOND! After their encounter with the deadly Borg, Captain Kirk and the crew of the U.S.S. Endeavour face an uncertain future… and a powerful new threat to the Federation! SEE ALSO: Check out the preview […]