Inspired by popular programmes like Buffy the Vampire Slayer, Angel and Being Human, Cops and Monsters is an innovative spin on the hallmarks of a much-loved genre, updating them for a new era – and setting it all in Scotland. With a host of professional TV writers bringing the series to life, Cops and Monsters initially found a home on YouTube, was met with much critical acclaim, and has now been picked up by Amazon. The supernatural police thriller is now exclusively available on Amazon Prime, which will be the home of any potential future instalments…

So, could you tell us a little bit about how you first got involved with Cops and Monsters?

Roland: I’d known Fraser Coull for a while via Twitter – even though we’ve not met in person – and he asked me if I wanted to write a special mini-episode. I knew about the series, had a vague idea in my head and thought it would be fun to do. So I said yes!

James: I got talking to Fraser when I was running the social media for a TV show he was posting about quite a lot. He’s very engaging, as you know, so I followed him from my personal account too. He sent me the scripts for the full series, which had been through a few drafts already at that stage, and we met up so I could make some suggestions. I don’t think he was that sold on the idea of a script editor at all at that point, but clearly I persuaded him it’s worth having one as he kept me on for the whole series.

Laura: James T. Harding, the Script Editor for Cops and Monsters and writer of the brilliant Storm in a Teacup episode, put me in touch with Fraser Coull. After sending through a sample script I’d written – a comedy about the end of the world – we chatted about me taking on the script for Episode 5. I had heard all about the show from James and was keen to get involved; at the time I’d just finished work on a drama feature and on a CBBC show, and I was looking for something new to sink my teeth into.

What was your writing process like – how did your episode evolve from inspiration to finished product?

James: In a storylined show, episode writers normally don’t control what happens in their episodes—their job is to write up the stories agreed on by the story team. But for Cops and Monsters, Fraser was keen to allow the episode writers the opportunity to bring more of themselves to the show, so the story documents were quite flexible, and he encouraged Laura and I to come up with our own original guest characters to flesh out the stories.

Laura: I read through the series bible and short episode outline that Fraser had assembled, and used these as a basis to pitch a treatment to Fraser and James. We went through this together, making a few changes based on things that had happened when filming the previous episode, cast availability and location options, and I was left to write the episode. It was great fun, and I was (hopefully) able to inject a bit of comedy into the script – something that’s very important to me – as well as creating the necessary dramatic arcs to set things up for the grand finale. I really enjoyed coming up with the self-help group and the characters attending, I took great delight in making Maya and Alexis meet for the first time in prison, and I loved creating the sympathetic vampire, Alicia.

Roland: Knowing the world of the series, I was interested in telling a ‘small’ story that reflected that wider world. For me, the small, emotional stories are sometimes more interesting than the ones told on a global scale. And with this in mind, spoilers, I had the idea about a mother trying to reach her daughter and get back the girl she had brought up. But the mother had to keep this a secret for many reasons – for her job, for the security of the country. So it was a simple, but emotionally charged story of maternal love vs wider responsibility. It asks big questions such as can you ever let go of your love for a child or how far would you go to protect your child?

James: In my case, the brief was to come up with a cameo for Sophie Aldred, so, you know, no pressure or anything… My original episode treatment had a one-scene character called Lord MacDiarmid, a conservative establishment vampire, the type who hangs out in gentlemen’s clubs, so I gender-flipped him and gave him a much larger role in the story for the first draft. Fraser liked her enough to work her into the backstory of the show (I’m not allowed to tell you how exactly) so perhaps we’ll see more of Lady MacD in future episodes…

Roland: I pitched the idea to Fraser and he liked it. I went away and wrote a first draft that seemed to work quite well. I think we went through a couple of minor draft edits and the episode was ready to go. Pretty painless really! The filming was completed and I was pleased with what the team had done. The performances of Joanna Harte and Simon Weir were lovely – as they wrestled with the emotional dilemma in the episode. Plus there is the layer of unrequited attraction there too – which Norris feels for Astrid. 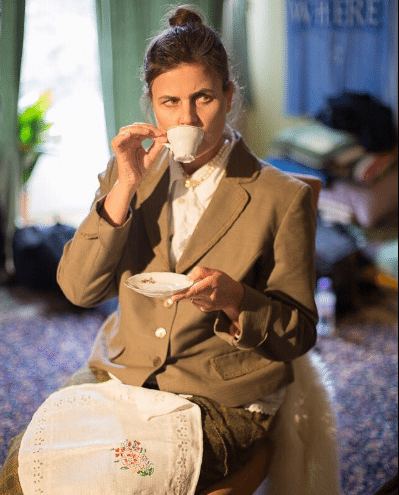 How do you think Cops and Monsters fits into the wider supernatural genre? What do you think makes it stand out?

Laura: I think there’s not just room for more shows about the supernatural world, but there’s a huge appetite for it. Personally, I can’t get enough – I still rewatch Buffy whenever I get the chance! For me, Cops and Monsters is unique because of the Scottish angle it brings to things, and because of the story world that Fraser created. I particularly love the complexity of the main characters, like Maya doing the wrong things in her quest to do right, to Alexis trying to find herself after years of exploitation.

Roland: I think its USP is that it could be viewed as a crime series that just happens to be set in a parallel Scotland where monsters exist. Lots of monsters. You’ve got an under-resourced organisation that is treated like a political football, struggling to control all these factions and stop various wars from kicking off. There’s the drama.

James: Supernatural TV is always a hybrid genre, because a supernatural show doesn’t come with an inbuilt story structure in the same way a detective show, for example, does. In our case, we’re melding with the police thriller but with an emphasis on long-term character development.

Laura: I’m delighted that Cops and Monsters is going to be seen by Prime viewers, and hope that it’s a signifier of things to come. As an indie filmmaker, it’s hard enough to get money to make a film, let alone finding money to submit to festivals, create marketing materials, and promote the finished piece, and all without any guarantee that you will end up in the cinema. Digital streaming platforms give us the opportunity to get our work out there and increase our audience reach in a way that is hard to do otherwise. I love going to the cinema, but there’s something wonderful about being able to cosy up under blankets at night with a mug of hot chocolate and a series like Cops and Monsters playing on screen in your own home.

James: The move to Amazon Video mostly represents a shift in the prestige in the show. Hopefully we’ll be able to leverage this to raise more money to make a more ambitious series two. British indie producers are probably going to need to lean in on the American market after Brexit, which means the American steaming services are going to be increasingly important here. We’re lucky that British shows and talent are already recognised and welcomed in the States.

Roland: I think the move to Amazon will help cement the series’ popularity and build on its success. Having a platform take on the series gives it as seal of acceptance which will probably encourage new viewers to give it a go.

James: One key difference between Amazon Video and YouTube is the audience expectation. YouTube is the unofficial home of the type of webseries which grew out of social networking: short episodes, regular updates, filmed on an ongoing basis, probably funny, sense of interaction with creators, sense of community around the show. People are reluctant to start a YouTube video that’s longer than five minutes (this is a statistically verifiable fact); but on Amazon Video I think people are primarily looking for longer-form content—it’s much more like traditional TV in that way. It remains to be seen how C&M fares in that new environment. I’m hoping to gain some insights into how we should approach the next series once the show is up and running on Amazon.

What would you most like audiences to take away from watching your episode of Cops and Monsters?

Roland: I’d hope that an audience might be moved by Astrid’s dilemma and perhaps touched by the resolution of it. But as long as they enjoy it, I don’t mind! And they might like Norris’ Christmas jumper…

James: The whole show is about the rise of fascism—a complete coincidence, as we didn’t know what was about to happen in world politics back in 2015 when Fraser and I wrote the show bible. In my episode, Maya lets her prejudices against werewolves get the better of her. I hope the show will help people recognise these harmful tendencies in themselves (we all have them) and take the step back needed to deal with them.

Laura: That even when there’s darkness in the world there are moments of levity, love and lightness, and that there’s both a little bit of good and a little bit of bad in everyone.

Laura A Anderson, Roland Moore and James T Harding – thank you very much!