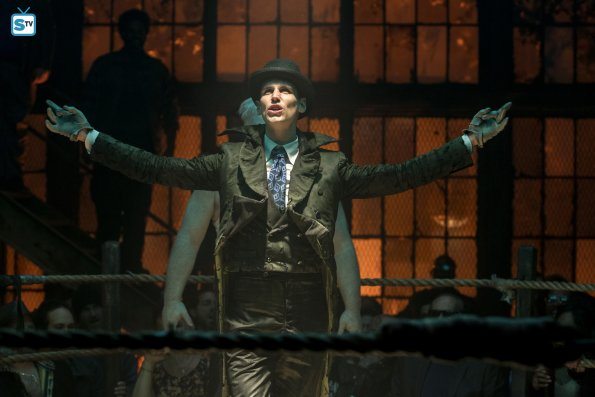 Cory Michael Smith turns a back street dive bar into something akin to Cabaret this week. Those too young to remember need only watch his moments in the wrestling ring, where vaudeville crosses over from side-show villainy into pure kitsch to know we have something special coming. Interwoven alongside other narrative threads which include Gordon’s moral quandary in opposition to an ever shifting underworld power play marks Gotham out for our attention.

It has become apparent as each week passes that it remains interesting not for what is happening in plain sight, but rather for those events which transpire in the shadows. Tabitha, Kat and Barbara may have joined forces again, but their actions merely fuel the fire rather than providing structure. Tabitha still has issues with Barbara, Barbara with Butch and Butch with Nygma. That is the driving force behind season four for me where every character is interlinked and reliant upon one another. Gordon needs Bullock as much as the latter needs the former. Penguin needs Nygma who in turn is driven to distraction by his pursuit of Penguin. Everything else is narrative leverage. 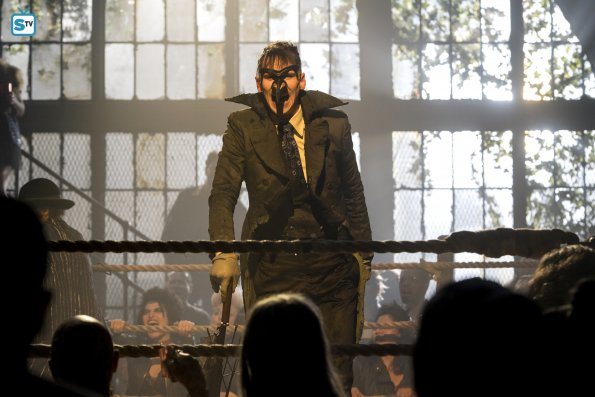 What raises Gotham beyond formula is a combination of this interdependence and those flashes of cinematic pastiche, which nod in the right direction and keep things ever so slightly comic book. This ever shifting balance of power has now become the mainstay which defines proceedings as new characters are more carefully introduced. Bloodletting is also something which has increased over time as plotlines have become more adventurous. A perfect case in point would be Solomon Grundy who has taken to dismembering opponents and bludgeoning them to death. Of course the actual wrenching of flesh is subtlety cut but that end result remains powerful. As people rise up or diminish through the ranks you have to ask how dark our so-called heroes are going to get before integrity kicks in.

For example Bruce Wayne has turned into a highly dangerous twenty something with a taste for beating people up. Gordon hides behind his sense of duty but is not above getting into bed with the wrong people, while Lee Thompkins has hit an equally slippery slope. These are all morally upstanding people who exist in a place which refuses to be governed by the righteous. Is it the case that you have to join them before you are able to beat them? Gotham would appear to be asking some dark and dangerous questions concerning criminality. Beyond the distracting grease paint, ornate set dressing and cinematic sleight of hand something else much darker is being addressed behind the curtain of artifice. That it promotes debate and gets us asking questions is no bad thing.