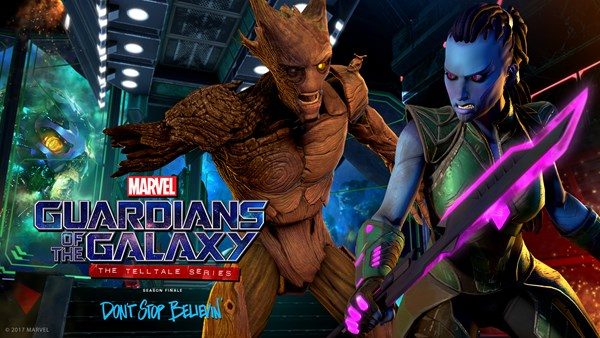 Telltale and Marvel Entertainment have announced that the fifth and final episode of Marvel’s Guardians of the Galaxy: The Telltale Series is set to arrive next week, and we’ve got a trailer for you here; check it out below, or watch it on our YouTube channel…

In the aftermath of an unbearable sacrifice, the Guardians finally fracture. With her opposition in shambles, Hala renews her campaign of death and devastation, carving a path of indiscriminate destruction en route to Knowhere. If he hopes to avoid catastrophe (and save his own skin), Star-Lord must search his feelings, reunite his team, and mount one final mission to save the galaxy…again.

The series features a star-studded cast of voice talent, including Scott Porter (Friday Night Lights, The Walking Dead: The Telltale Series) as Star-Lord, Emily O’Brien (The Young and the Restless, Middle Earth: Shadow of Mordor) as Gamora, Nolan North (the Uncharted series, Pretty Little Liars) as Rocket, Brandon Paul Eells (Watch Dogs) as Drax, and Adam Harrington (The Wolf Among Us, League of Legends) as Groot.

Don’t Stop Believin’ is set for release on November 7th on PlayStation 4, Xbox One, PC, Mac, Android and iOS.