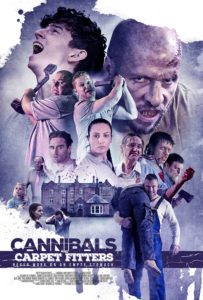 An unfortunate combination of customer dissatisfaction, managerial impotency and employee laziness has resulted in Cupid Carpets falling on hard times. As a result, Nigel (the firm’s desperate, but ultimately ineffectual, owner) is all-too-eager to take on any job that comes his way. So when he gets a call from an old country house, situated in the middle of nowhere, he doesn’t hesitate in sending his team to the remote location. Upon arriving however, the carpet fitters quickly realize that the job is actually a trap set by a local family of bloodthirsty cannibals. The carpet fitters are thus forced to band together in a brutal fight for survival, one that pits them against the deformed and savage Hannings clan. 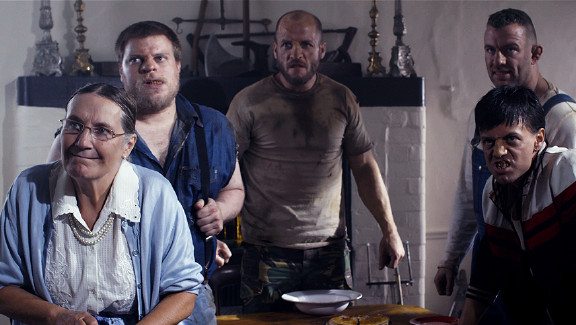 Even after watching the film intently, I am still a little perplexed as to exactly why the title Cannibals and Carpet Fitters is meant to be enticing. Not the cannibal part obviously, that has a fairly clear-cut appeal for horror fans. But carpet fitters? What separates them from literally any other prospective slasher victim? They’re just normal people right? There aren’t any especially thrilling connotations associated with the trade, nor is there anything truly remarkable about them that could be exploited in a life-or-death scenario. They’re not even particularly funny come to think of it!

Given this, you have to assume that if carpet fitters were being pursued by flesh hungry maniacs, then their profession wouldn’t factor into things in the slightest. In fact, you could go as far as to say that, in this singular context, they are literally the same as anyone else! So alliteration aside, what is supposed to be the main draw of this lacklustre pairing? How is it any different from say “Cannibals and Admin Assistants’’ or ‘’Cannibals and IT Support Analysts’’?

Alas, this is a question that James Bushe’s uninspired Shaun of the Dead clone routinely fails to answer. Which doesn’t mean that it’s a particularly bad film, just that it’s sorely lacking a proper unique selling point. Indeed, as soon as the plot kicks into gear, the idea that our heroes are carpet fitters becomes immediately irrelevant and the film descends into fairly generic, albeit inoffensive, Cabin in the Woods flick.

I suppose one of the protagonists gets to use a hammer tacker as a weapon, but that’s about the extent of the premise’s comedic scope. In other words, there is no mileage to this concept beyond “Ha ha! Carpet fitters aren’t normally in horror films!’’ I hate to say it, but it doesn’t have the same outrageous and attention-grabbing pull as something like Lesbian Vampire Killers or Cockneys vs Zombies. Which is annoying, because both of those films are far, far worse in terms of their execution.

Ignoring the fact that it has no compelling reason to exist, Cannibals and Carpet Fitters manages to be an otherwise solid production. Not a great one mind you, but it’s serviceable enough given the apparent low-budget constraints. After all, things move along at a decent pace, the deaths are often unpredictable, the gore effects are surprisingly sophisticated and the cinematography is in-focus throughout (which may sound like faint praise, but after recently enduring both Bunnyman Vengeance and The Basement, I have a newfound appreciation for the bare-fucking-minimum).

Even the acting is relatively good, bar a sub-panto performance from Jenny Stokes, who plays the cannibal family’s domineering matriarch.  For an indication of just how am-dram her scenes can be, picture a 6-year-old channelling a wicked stepmother and you’re somewhere in the vicinity of how embarrassing it is to watch.

The only other glaring flaw comes in just how blatant the filmmakers are in their attempts to ape Edgar Wright. Of course there are plenty of directors guilty of this sin, so it might seem a tad unfair to single Bushe one out. However, at times, the imitation here borders on flat-out copying. All of the Cornetto staples are here; we have recurring dialogue that later takes on a new meaning,  The World’s End-esque soundtrack choices and one character who is so obviously a Nick Frost stand in, that he literally asks the emergency services to send in a fire engine, a police car or ”Anything with flashing lights”. Whether or not that line is a loving homage or a shameless rip-off is entirely up to you.