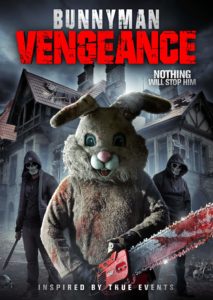 In this concluding chapter of the Bunnyman franchise, the titular serial killer (AKA Michael) returns home after an unfortunate run-in with the law. Upon arriving at his domicile, Michael soon discovers that his equally deranged family is busy embarking upon a quaint business venture, whereby they hope to exploit the notoriety of the Bunnyman legend, in order to drum up publicity for their new haunted house attraction. Although the clan is initially willing to cooperate on this, whilst also indulging in their sadistic impulses on the side, tensions quickly come to the fore and before long, they are all at each other’s throats. As can be expected, frenzied anarchy and demented slaughter ensue.

Strange though it may seem, the best way to open a review of Bunnyman Vengeance, is by considering the above plot summary. Which is odd, because for most films, that scant outline would be nothing more than a description of the basic set-up. A cursory glance at the gist of the narrative, one which would then be filled out in greater depth by the movie itself. It would outline the rough premise, introduce the central characters and maybe sprinkle in a few early plot details along the way. Overall, the intention is to give you just a small taste of the overall story, without giving away too much or providing excess minutiae.

In the case of this film however, the synopsis is easily a more coherent and comprehensive version of events than the movie itself. It’s more focused, it has a more logical cause-and effect structure, and it even has some semblance of narrative direction. It is essentially, the best I could do with what the film gave me.

Just to clarify, the summary is not intended to abbreviate the narrative for the sake of the reader. Nor is it a weak justification for bolstering the review’s word count.  Instead, it is part of an authentic effort to understand what the hell this piece of shit is supposed to be about. It’s an honest endeavour at interpreting a loose collection of disjointed scenes, none of which have any context, linkage or meaning.

In short, this is a hopeless translation of 108 minutes of impenetrable, rambling nonsense. A type of writer’s therapy if you will. Incidentally,  it is also an exercise that I would recommend to anyone who is unfortunate enough to watch Bunnyman Vengeance.

Narrative-wise, the closest reference point here is probably The Texas Chain Saw Massacre, thanks to the redneck torture family and an ‘’iconic’’’ mascot, in the form of a hulking deformed mute who uses a chainsaw. However even the original TCM, which was basically just a prolonged chase sequence, had more in terms of story.  In fact, basically every slasher film ever made has more narrative drive this than this. Even the most flimsy of Halloween knock-offs will have a clear protagonist and a fairly standard structure. Bunnyman Vengeance doesn’t even have that!

What we get instead is just an aimless procession of scenes with no connective tissue whatsoever. Almost ¾ of the runtime is devoted to a conveyor belt of random characters, none of whom bear any relation to each other, ambling into Bunnyman’s home and then getting captured, tortured and killed. This happens continuously for a good hour and a half , with no sense of progression or aftermath at all. You just meet the teens (most of whom will not be granted even a single line of dialogue) and then 5 minutes later they will all be dead, and so we have to start all over again with a new bunch. It’s like an endless series of prologues without an actual film to lead into.

Now, before the ‘’Were you expecting Shakespeare’’ crowd rear their heads, let’s be perfectly clear. No one is demanding high art from fucking Bunnyman Vengeance. That would be ludicrous and anybody who went in with such inflated expectations, deserves to have a thoroughly miserable time with the film (Which will they will anyway assuming they have eyes). Nevertheless, some storytelling fundamentals wouldn’t go amiss. Regardless of artistic merit, it’s always nice to have things like clarity, internal logic and protagonists that are in the film for more than a single scene.

Breaking up the meaningless kill sequences are a smattering of tortuously slow domestic scenes, supposedly depicting the mounting tensions between the killers. However, they offer nothing in the way of edification as to who any of them are, why they are doing what they are doing, or where ANY OF THIS IS SUPPOSED TO BE GOING! Because no new information is revealed at any point and because there are no characters to develop, the scenes are not dependent upon each other to make sense. This means that you could start the film at any point and it wouldn’t matter. You could tune in 10 minutes from the end and it wouldn’t make a difference, because there’s no structure to anything. There’s no purpose, no logic, no consequences, no entertainment value, no anything!

You can’t even enjoy it as a ‘’turn your brain off’’ affair, because A) everything is so tedious and drawn out and B) it is all presented so horribly, with abysmal lighting, abhorrent acting and astonishingly bad special effects. On that subject, this honestly might have the worst audio-mix in cinematic history. It’s almost as if the filmmakers thought they were limited to one layer of sound at a time, as dialogue will frequently cut off background ambience like crickets chirping, only for it to abruptly return a few seconds later after the line is finished. Meanwhile, it is not an uncommon for the acoustics to be so poor that it sounds like characters are conversing from entirely different planes of existence. Indeed, one instance of ADR was so poor that I seriously thought I had accidentally activated a commentary track. It turned out that it was supposed to be dietetic speech.

Recurrent flashbacks to Bunnyman’s origins are peppered throughout the film, depicting his early childhood and the moment that he first put on his signature rabbit mask. Confusingly, these memories are consistently presented as retro film footage, even when there is no logical reason for such material to exist. After all, these recollections are of deeply personal and traumatic occurrences, some of which take place in isolation, with no one else around. The only conclusion we can draw from this, is that Michael must invariably remember things in 8mm. Either that, or someone filmed him as he was set on fire and then proceeded to edit together the multi-angle footage and give him a copy of the print.

Whatever the explanation, these ‘’tragic’’ sequences fail miserably in their attempts to inject nuance and profundity into proceedings, which is clearly their purpose, as signified by the heavy-handed musical accompaniment.  That’s right, this film actually strives for pathos! Somehow we’re supposed to think that Bunnyman is a tragic anti-hero, even though he is introduced beating a child in the face and is later shown curb stomping a woman into a revved up chainsaw!

What’s more, the filmmakers cannot even fully commit to their po-faced tone, thanks to one momentary excursion into completely lunacy. It’s hard to explain, because it’s so deliberately irreverent and is practically begging for meme status, but essentially there is a trippy dream sequence with Bunnyman listening to Europop, being breastfed by a giant female bunny and riding a motorcycle into someone’s ear. It’s every bit as irritating as it sounds.

When a film is this meandering, it feels like it could on indefinitely. With a clear direction, usually comes a clear destination. However, because Bunnyman Vengeance does not have the former, it also denies us the latter. At any given time, the credits could be literally seconds away, or we could equally still be in the first act and you wouldn’t be able to tell the difference. You’ll be gaping slack-jawed at the screen, constantly questioning why this happening to you, why any of it matters and when it will just end.  Basically to watch Bunnyman Vengeance is to visit an existential crisis upon oneself.