Aspiring musician Miguel, confronted with his family’s ancestral ban on music, enters the Land of the Dead to work out the mystery. Music is a universal art form, so it would be perplexing (and would probably set off bullshit alarms) to discover a family with such hatred for it that they forbid it period. Literally, every human being on the planet likely has a song or piece that connects to their emotions on a personal wavelength. However, that is the bummer case with Miguel’s (Anthony González) kin, who instead funnel all of their efforts into a successful homegrown shoe designing business established by a long-lost ancestor as a reactionary method to cope with the pain of her and her daughter, the titular Coco (great-grandmother to Miguel), being abandoned by the man of the clan to pursue his ambitious musical career. His meteoric fame only made the sadness harder to bear.

Following some lengthy but cleverly integrated exposition, the crowded bunch prepare for Dia de Los Muertos which translates to the Mexican holiday Day of the Dead; it’s a 24-hour window thoughtfully set aside for remembrance of loved ones where it is believed that spirits can cross over into the realm of the living and interact with them. Pixar culturally envisions these wonders with an actual alternate plane of existence where the dead reside, populated with child-friendly skeletal incarnations of the deceased (all sporting different clothing attire and bone structure to match their personalities and living physical appearances respectively). The narratively minded animated geniuses (Toy Story 3 director Lee Unkrich helms the daunting project working from a story conceptualized by story artist Adrian Molina) run wild with brightly colored imaginations, expanding on the celebratory occasion in a number of ways, but it’s really best to simply experience Coco with as little beforehand knowledge as possible. Essentially, Miguel stumbles upon a way to traverse between spectral planes, with his intent being to find his great-great-great-grandfather, Ernesto de la Cruz (Benjamin Bratt) who is rocking out in the afterlife so that he can gain permission to follow in his footsteps (something his surrounding relatives staunchly oppose, slowly forcing him into designing shoes as the young boy ages) and maybe even gain an understanding as to how he came about the difficult decision to leave his blood behind and never return.

There are definitely accessible elements to younger audiences (namely some slapstick humor in addition to a stray dog companion seeking to find a purpose unexpectedly as a spirit guide after inexplicably crossing into the Land of the Dead with Miguel), but Coco is far more comparable to recent Pixar masterpieces like Inside Out in that it isn’t afraid to explore heavy themes for adults. Not to mention, there is an equal fascination learning the ins and outs of both created worlds (the Land of the Dead has a society complete with jobs and more). The struggles of a hungry artist are another example, but Coco is dealing with life and death in ways that will genuinely move just about anyone that watches it. Coco is so genuinely moving that if someone had recently lost a loved one and went to see it, I honestly don’t know if they would be able to finish the movie, and if they did, their eyes would be buried in tears. 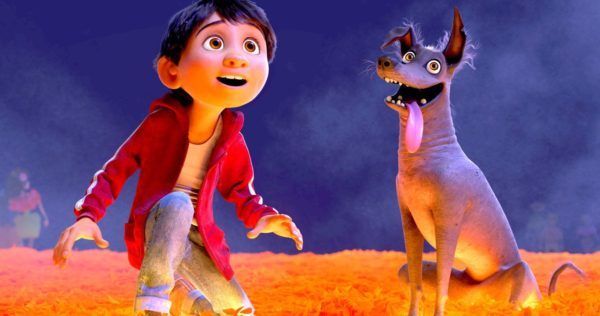 Keep in mind, Coco is still a feature that should be watched by viewers of all ages, also boasting a striking color palette and charming side characters that makes the Land of the Dead feel more lively than most movies this year. The inclusion of different kinds of animals functioning as spirit guides is initially offputting solely feeling like a distraction to make sure children don’t become bored, but I’ll be damned if by the end I wasn’t beguiled by their colorful presence. Naturally, Coco is also richly steeped in Mexican heritage, respectfully handling the presentation of the delicate holiday by fusing the experience with Mariachi bands, references to luchadors (professional wrestlers in Mexico), authentic looking locales, catchy songs from Marco Antonio Solis in collaboration with the always reliable Michael Giacchino, and a full-blown cast of Hispanic actors. However, the beauty of it all is that citizens of all walks of life will come away enamored, possibly with new perspectives and thought processes on the afterlife. It’s an enriching and enlightening experience.

With that said, it would have been more appropriate if the script could function in a way that doesn’t serve up a villain at all. If memory serves me correctly, Inside Out is the only Pixar film to date that doesn’t have an evildoer, and it’s one of many reasons that it’s arguably their strongest feature in an already staggeringly incredible body of work. A certain aspect here just feels too predictable (even with copious amounts of misdirection from the filmmakers), even if it does add another layer of discussion to the cost of artistic success versus supporting one’s family. 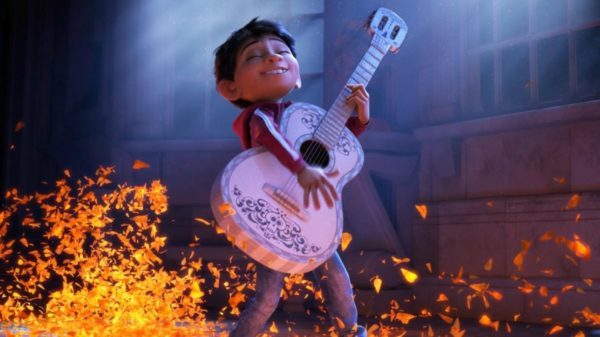 Accounting for that one nitpick, Coco is easily the best animated feature of 2017. It’s absolutely gorgeous (Pixar once again displays incredible attention to detail whether it is with environmental or physical effects, or immersive touches such as Miguel’s fingers strumming on a guitar). The themes explored are as universal as the art of music itself, resulting in a touching celebration of life and the afterlife. Most importantly, it expresses the importance of never forgetting our heritage, where we come from, and our loved ones who came before us.