Fans of Cartoon Network’s Ben 10 will be able to strap on their Omnitrix and get in the thick of a brand new adventure as London based publisher Outright Games announce the release of their latest title, Ben 10, on Xbox One, Playstation 4, Nintendo Switch and PC.  For a glimpse of the action in this new adventure watch the new trailer below… 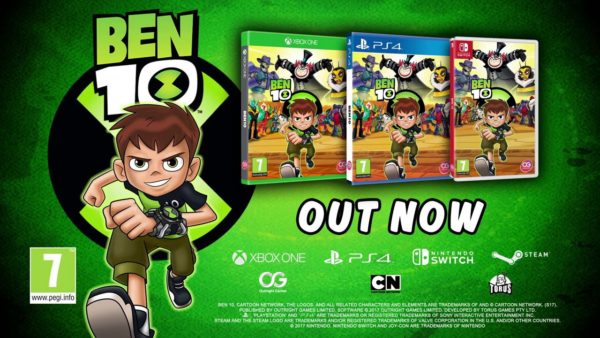 In Ben 10 players will become Ben Tennyson on a mission to take out some of the most deadly enemies in the universe.  If you are a follower of Cartoon Network’s animated series then these villains will be no surprise.  It will be tough going facing off against all these memorable enemies but fortunately Ben 10 has the powerful Omnitrix at his disposal and will be able to discover and unlock the 10 aliens that Ben can transform into.  Players will be able to use the strength of Four Arms, the skills of Grey Matter and warm up the action with Heatblast plus there will be plenty more alien heroes to discover the unique combat moves of.

“As a family business, we are committed to creating fantastic family entertainment,” said Terry Malham, CEO of Outright Games. “We’re excited to be working with Cartoon Network on such an amazing license to bring brand new adventures to the world of Ben 10.”