MMO developers Wargaming have announced that a brand new branch of Pan-Asian Destroyers from China, Thailand, Indonesia, Taiwan and South Korea are on their way to World of Warships.  Nine destroyers in total will be coming to the game soon and each one is equipped with deepwater torpedoes. Wargaming have provided a new video showcasing these new vessels and can be seen below… 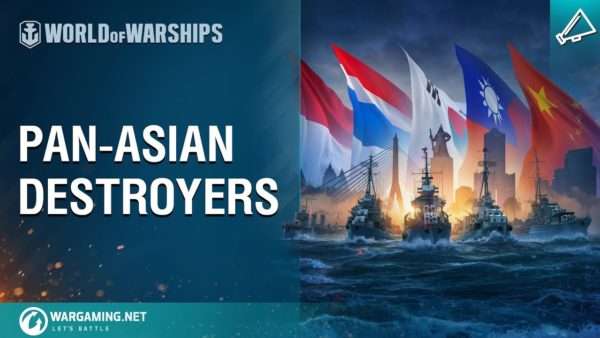 Although the Pan-Asian faction cover a selection of nations the new branch of destroyers mostly come from the Republic of China (Taiwan).  These new destroyers are:

Tier III: Phra Ruang (Thailand)
British destroyer of the R-class transferred to the Thai Navy in 1920.  A very high speed and good armament made this vessel the most powerful torpedo ship in the Thai Navy.  It carries 102 mm/40 PIX guns (3 x 1) and 533 mm DR Mk II torpedoes (2 х 2).

All nine of these destroyers have Deepwater Torpedoes that travel at greater depths and deal more damage to larger capital ships than standard torpedoes.  This sounds brilliant for those wanting to get easy hits but there’s a downside, these torpedoes can also pass beneath a ship without hitting it if the opposing ship is another destroyer or shallow draft cruiser.

Look out for these new destroyers coming soon.