As a word, it has become synonymous with determined women in movies. Why? Because that is how critics routinely describe them.

“Black Widow gets extra bad-ass in this Avengers 2 trailer,” said Rob Bricken of i09.

In Atomic Blonde, Charlize Theron plays “a career badass who enjoys both the job and the perks with equal enthusiasm,” according to J. Hurtado of Screen Anarchy.

Kaya Payseno of Bust tells us that “Badass women star in a feminist western,” while reviewing The Keeping Room.

According to Wendy Ide of The Guardian, Wonder Woman is “A gloriously badass breath of fresh air.”

From whence does this strangely limited vocabulary come? How have we reached a point where a critic can use the word ‘badass,’ and we almost all picture exactly the same thing: a mostly solitary woman, in figure hugging/revealing costumes, scowling and being violent?

I contend that it comes from the fact that women in lead roles onscreen, in mainstream cinema, are almost always one of a handful of ‘types’ – because they are regularly written that way. We have the Scream Queen/Damsel-In-Distress, we have the Kooky-And-Beautiful-But-Doesn’t-Know-It-Girl, we have the Effortlessly-Attractive-Scientist/Academic-Lady, and we have The Badass. The Badass is a surprisingly flexible woman who can be found in all manner of situations – from Bond Films to sci-fi franchises – but she is usually a “Damaged Heroine.” The issue of the Damaged Heroine was brought into sharp relief in the wake of the release of Wonder Woman – when Academy Award winner James Cameron decided to punch down from atop his global box office throne and declare to The Guardian that the film was actually sexist – because the Amazon warrior was not “troubled,” in the traditional, Hollywood way.

“All of the self-congratulatory back-patting Hollywood’s been doing over Wonder Woman has been so misguided. She’s an icon, and it’s just male Hollywood doing the same old thing! I’m not saying I didn’t like the movie but, to me, it’s a step backwards. Sarah Connor was not a beauty icon. She was strong, she was troubled, she was a terrible mother, and she earned the respect of the audience through pure grit. And to me, [the benefit of characters like Sarah] is so obvious. I mean, half the audience is female! I don’t – I don’t know. There are many women in power in Hollywood and they do get to guide and shape what films get made. I think – no, I can’t account for it. Because how many times do I have to demonstrate the same thing over again? I feel like I’m shouting in a wind tunnel!”

“Linda [Hamilton – playing Sarah Connor] looked great. She just wasn’t treated as a sex object. There was nothing sexual about her character. It was about angst, it was about will, it was about determination. She was crazy, she was complicated. … She wasn’t there to be liked or ogled, but she was central, and the audience loved her by the end of the film. So as much as I applaud Patty directing the film and Hollywood, uh, “letting” a woman direct a major action franchise, I didn’t think there was anything groundbreaking in Wonder Woman. I thought it was a good film. Period. I was certainly shocked that [my comment] was a controversial statement. It was pretty obvious in my mind. I just think Hollywood doesn’t get it about women in commercial franchises. Drama, they’ve got that cracked, but the second they start to make a big commercial action film, they think they have to appeal to 18-year-old males or 14-year-old males, whatever it is.” Now, James Cameron is demonstrably wrong here, as evidenced by the demographics of the massive audience for Wonder Woman – which, on opening weekend, was comprised of 52 percent women, and 48 percent men. This was not, therefore, a film designed to lure 18 and 14 year old males into cinemas. But, his larger incorrect assertion is the fact that, in order to avoid being sexist, a female character must be a Damaged Heroine. Or, as Cameron puts it, “troubled.”

Obviously, the reason James Cameron was being interviewed at all was because he had just announced the fact that he would be returning to his Terminator franchise, and that the new film would also see the return of Sarah Connor, played by Linda Hamilton – so it stands to reason that the filmmaker would seek to suggest that his creation is better than all others. But, in servicing his own project in this seemingly negative way, Cameron has actually provided us with an opportunity to examine the Damaged Heroine trope, and its origins.

It could be argued that James Cameron has contributed to the creation of the modern Damaged Heroine trope in a major way, since his filmography is filled with notable leading female characters. However, his filmography also demonstrates the problem with the Damaged Heroine, which is that every incarnation of said heroine is essentially the same woman.

To be clear, James Cameron writes exactly two women. His female characters are either versions of Sarah Connor as she appeared in 1984’s The Terminator (‘Traditionally Hollywood Feminine’ – initially unsure, and sleeps with the male lead), or Ellen Ripley of 1986’s Alien (‘Damaged Heroine’ – traumatised, and scowls a lot). That is to say, when James Cameron delivered a sequel to Ridley Scott’s 1979 film Alien, he took an outstanding, exemplary female character (Ellen Ripley), and turned her into a Damaged Heroine trope. Sarah Connor of 1991’s Terminator 2: Judgment Day is an almost exact copy of Alien’s Ellen Ripley – right down to the way in which her actions are defined by her relationship to motherhood.

Don’t get me wrong – both Aliens and Terminator 2: Judgment Day are brilliant films, but let’s not pretend that James Cameron writes great women. Those films are great in spite of his failings in characterisation. So, to suggest that the only way a female film character can be successful – and not sexist – is to adhere to James Cameron’s idea of female characters (which is, more often than not, the Damaged Heroine) is itself sexist. He positions himself as the gatekeeper of feminist portrayals, and if your female character does not meet his criteria, she shall not pass.

But, what is the legacy of the combination of this Cameron-era Damaged Heroine, and a “Badass”-loving community of critics? More of the same. That is, the same woman – again and again – which is a trend not helped by the fact that there is usually only one leading female character in casts otherwise filled with men.

Those men, by contrast, get to be individuals. Take a look at the Marvel Cinematic Universe. For the first six years and nine films – that is 2008’s Iron Man, to 2014’s Captain America: The Winter Soldier – the only women with a significant role to play in the franchise were Pepper Potts and Natasha Romanoff/Black Widow.

In personality and function, both women are included in the MCU narrative for the purpose of facilitating the actions of the male heroes, while the male heroes all get their own film series. In terms of wardrobe – in Iron Man 2 (Romanoff’s first appearance), both women dress in prohibitively tight, almost identical business attire. When Natasha reveals herself to be Black Widow and, in later films, a S.H.I.E.L.D agent, we find that her superhero costume is actually identical to that of other female S.H.I.E.L.D agents, such as Agent Hill. The costumes of the male heroes are, of course, wildly different from one another.

Male heroes are often “damaged,” too. Tony Stark has that whole guilt-ridden panic attack thing happening. Captain America sacrificed himself and lost both Agent Carter and Bucky Barnes. Thor has sibling issues, Star-Lord had a challenging childhood, Ant-Man is attempting to redeem himself as a Dad, and Doctor Strange is trying to keep his enormous ego in check. What a vast range of obstacles these men have to overcome. 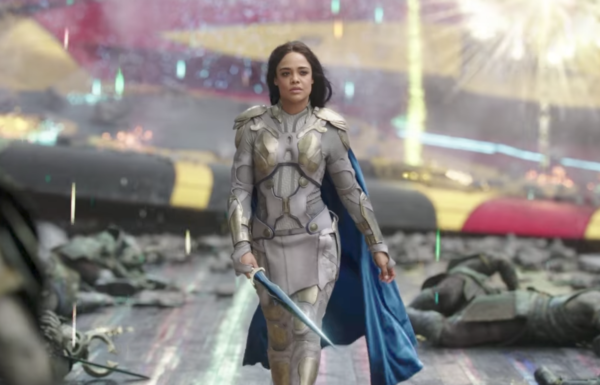 For the Damaged Heroine – including the MCU’s Black Widow and, indeed, the later addition of both Scarlet Witch and Hope van Dyne – it is always the same: abuse, gender-based manipulation, and/or something to do with motherhood. For this reason, Valkyrie – as introduced to the MCU in Thor: Ragnarok – is a welcome breath of fresh air. She is groundbreaking within the context of her franchise, and is rare in cinema in general, because – like Wonder Woman – she is a capable, determined woman who is driven by motivations outside the tedious confines of the Damaged Heroine trope. And she has a great costume that is unique to her.

Arriving on March 23rd 2018, Proud Mary stars Academy Award nominee Taraji P. Henson as the titular hitwoman. Written by Steve Antin, John Stuart Newman and Christian Swegal, it boasts Babak Najafi at the helm. The story sees Henson’s hitwoman thrust into a life-or-death situation, when her organised crime bosses send her on an assignment that goes wrong, and she crosses paths with a young boy.

Based on the novel by Jason Matthews – the adaptation of which is written by Justin Haythe – Red Sparrow is directed by Francis Lawrence, and stars Academy Award winner Jennifer Lawrence. Released on March 2nd, 2018, it will see the actress play Russian ballerina Dominika Egorova – who, while seeking to protect her mother, undergoes the sadistic training process of Sparrow School to become a spy trained to use her body as a weapon.

Even this far ahead of their releases, we can clearly see the Damaged Heroine threads in both films: Abuse, gender-based manipulation, and/or something to do with motherhood.

Will either Red Sparrow or Proud Mary break the mold? Will either Dominika Egorova or Mary join the ranks of actual groundbreaking female characters, like Wonder Woman and Valkyrie, or will they be filed alongside the other women who have met the criteria of James Cameron, and ticked every box in the Damaged Heroine trope?

Employing the law of averages, I know which outcome I’m expecting – but I’m always hoping to be pleasantly surprised.