Firaxis and 2K have released a new trailer showing one of the nine new civilisations that players will be able to experience in the Rise and Fall expansion for Sid Meier’s Civilization VI.  This latest video for the new civilisations in the expansion provides a ‘First Look’ at the Netherlands led by Queen Wilhelmina.  Watch the trailer for the latest civ below… 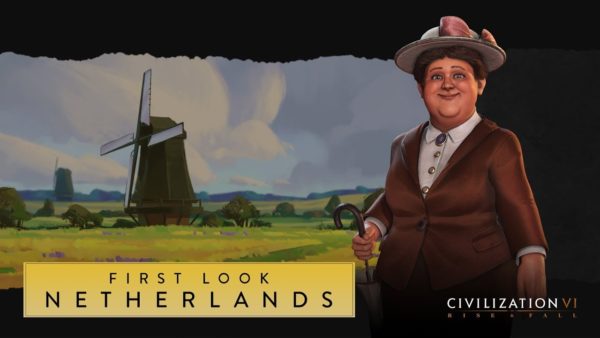 Queen Wilhelmina saw Netherlands through the dawn of the 20th century, the economic collapse of European nations and through the turbulent times of both world wars.  Her unique ability is Radio Oranje and stengthens loyalty of starting cities on trade routes within her empire.  trade routes to other civilisations will provide culture.

The Netherlands’ Grote Rivieren ability will provide major adjacency bonuses when campuses, theatre squares and industrial zones are built next to a river.  In addition, completing a harbour will also take available adjacent tiles.

The Polder is the Netherlands’ unique city improvement and when this is placed on water tiles with sufficient coastline nearby it provides food, production and housing.

Finally, Netherlands’ unique unit is the DeZeven Provinciën, a warship with increased range and combat strength plus a generous bonus when attacking defensible districts.

All in all, the Netherlands is a civilisation that can grow and expand beyond the borders it is given and can be defended with its warships.