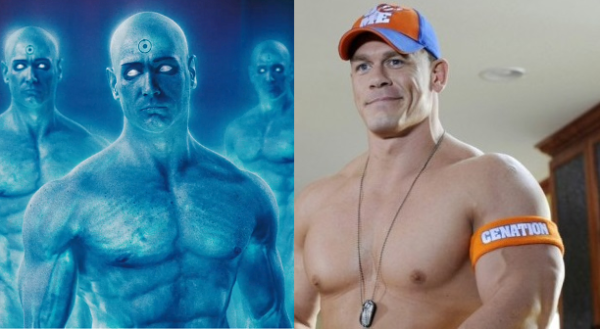 Rumours are circulating that the Doctor of Thuganomics could be set to take on the role of Doctor Manhattan, with recent social media postings by John Cena leading to speculation that the WWE star is in line for the role of Manhattan in HBO’s upcoming Watchmen TV series from Damon Lindelof.

Now, it is of course possible that Cena is simply a fan of Watchmen, or he’s trying to drum up some support for himself in the role as he attempts to follow in Dwayne Johnson’s footsteps and continue his transition from the squared circle to Hollywood.

Cena will next be heard in the animated film Ferdinand, and has the comedy Blockers and Transformers spinoff Bumblebee incoming in 2018.

Could you see John Cena as Doctor Manhattan? If not, who would you cast in the role? Let us know your thoughts in the comments below…