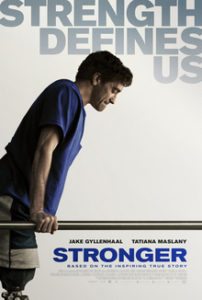 Stronger is the inspiring real life story of Jeff Bauman, an ordinary man who captured the hearts of his city and the world to become a symbol of hope after surviving the 2013 Boston Marathon bombing.

On 15th April 2013 two bombs were detonated at the finish line of the Boston Marathon. Stronger focuses on the story of Jeff Bauman (Gyllenhaal) who underwent a double above the knee amputation after being caught in the blast.

Stronger is not an easy film to watch. From the off the tension builds to almost unbearable levels as Jeff heads to the finish line and it’s an agonising eternity before the bomb goes off. A standout scene is when Jeff is having his bandages removed for the first time. Instead of focusing on the injuries themselves, director David Gordon Green keeps the background out of focus and instead we see close-ups of Jeff’s reactions and his girlfriend Erin (Maslany). Their faces are all we see and this delivers more emotional punch then any gory details could ever hope to. Another great scene is when an extremely drunk Jeff gets behind the wheel of a car and gets his friend to pretend to be his legs. The freedom on Jeff’s face is heart breaking. There are also several scenes that start to delve into the emotional impact of Jeff’s injuries, but the script never goes too far, ultimately leaving a lot of unexplored territory. It’s also made clear that Jeff doesn’t want to be the face of “Boston Strong” but this only touched upon.

Jake Gyllenhaal continues his incredible run of stellar performances. He’s an actor that continually surprises and has developed an almost chameleon like ability to morph into different characters. The story of Jeff Bauman has been a passion project for him and this shows in his performance. Relying mostly on subtle facial expressions and small bursts of anger – a scene with Jeff and Erin in an elevator is edited together with images from the bombing – Gyllenhaal once again shows that he can embody anyone. With Oscar season in full swing it does seem that he is throwing his hat into the ring after he was ignored for his superior performance in Nightcrawler. That isn’t to take away from his performance here which is captivating; it’s just not as good as some of his previous roles.

Rounding out the supporting cast is Tatiana Maslany as Jeff’s on again, off again love interest Erin. We don’t find out much about her but Maslany is fine in the role and has good chemistry with Gyllenhaal. A surprise was Miranda Richardson as Jeff’s mother Patty. A hugely talented actress, her Boston accent is flawless and she delivers a solid supporting presence. 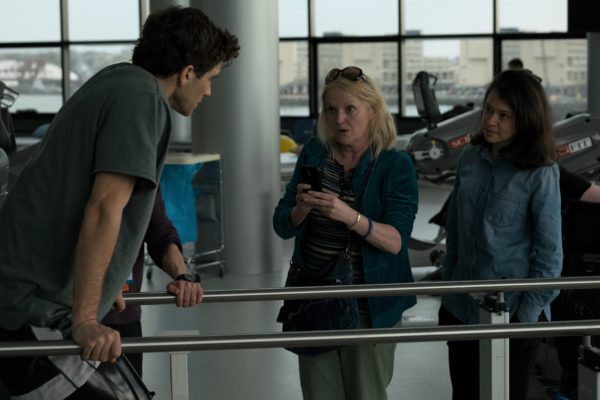 Telling a story about a real life event is always going to be challenging. Telling one about a terrorist event is another matter entirely. For me Stronger did focus a bit too much on the American patriot angle which was interesting but ultimately something that I’ve seen before. This isn’t to detract from the real life events which were harrowing and the story of Jeff Bauman is inspiring. The issue is that there is nothing new to see in terms of film making. There are some amazing scenes which should be lauded, but ultimately this is a by the numbers biopic that hits a lot of the same beats that we’ve seen in superior films.