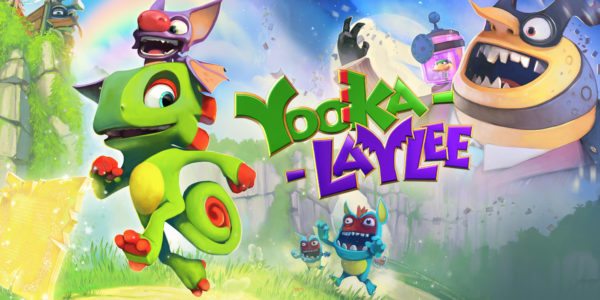 You’ve got to feel a little bad for Playtonic games. The studio formed from several former key players at Rare during their golden years launched an insanely successful kickstarter campaign, to fund a spiritual successor to Banjo Kazooie, but only received lukewarm praise at best. To make matters worse, they missed their chance to get their 3D platformer Yooka-Laylee on the Nintendo Switch while the software library was still relatively scarce, now with the dawn of Super Mario Odyssey, it seems unlikely that Yooka-Laylee will receive even a tiny fraction of the sales and attention that it would had otherwise. Nevertheless, let’s take a look.

Getting straight to it, Yooka-Laylee is a great port that functions well on Switch, plays smoothly and looks great in both docked and handheld mode. The initial delays for the game were due to the Unity engine not co-operating well with Switch, so the studio felt the need to wait for crucial updates. Clearly that paid off, as the game has no notable technical issues, there’s not many clear graphical concessions for the Switch version versus those on PS4 & Xbox One, and all-around it’s just a solid port job. It appears to be well optimised and is one of the better looking games on the system to date, not made by Nintendo.

In the world of Yooka-Laylee, everything seems to be where it should be. You start with no abilities, tasked with collecting pagies (not jiggies), so you can continue to expand the game’s hubworld and open new areas, so you can keep the cycle moving. The various levels are also littered with quills, which you’ll have to collect to learn new skills, many of which you’ll need to gather more pagies. As you progress, our chameleon and bat duo become infinitely more useful, gaining a useful array of skills, such as the ability to shoot projectiles, or to fly, that’ll make traversing levels and collecting things much easier. While this is all probably sounding very familiar there is one issue. They’ve very much based it on the Banjo Kazooie formula as expected, and the nostalgia is there, but the level design lets Yooka-Laylee down massively. 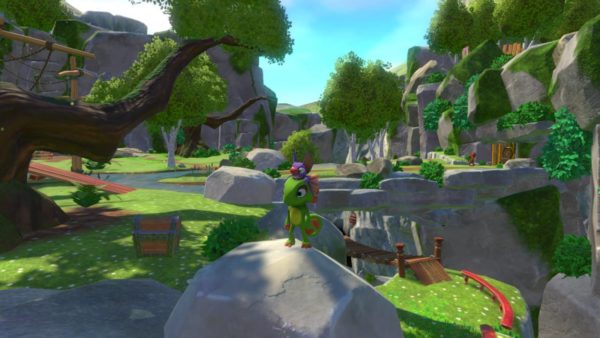 Like many 3D Platformers, the first level of Yooka-Laylee is by far the most visually appealing, and the most memorable.

Banjo Kazooie was often more beloved than it’s sequel, Banjo Tooie, because it had a much tighter design with less wasted space, levels were straightforward and intuitive which kept you always moving forward. In Tooie, there’s more backtracking, levels are messier and confusing, generally the gameplay felt constantly disrupted. Unfortunately, Yooka Laylee very much falls into that category. Collectibles aren’t used to guide you around a level to explore every nook and cranny, they’re placed in bizarre, off-kilter locations for the most part which almost seem to be intentionally trying to distract you. It almost feels like the challenge is not in the platforming, combat or exploration, the challenge is primarily in identifying what the game actually wants you to do. Also, your goals involve doing a lot of back and forth a lot in one zone, which only goes to extenuate the game’s needlessly large levels, dead ends and general emptiness. The set pieces are all there, but they’re arranged in such a way that they play to the 3D platformer’s key weaknesses, and not its strengths.

At the time of the game’s initial launch, many struggled with the game’s sometimes awkward camera angles and considered it to be a worse situation than back in the N64 days. More than anything else, that seems like gamers looking back at Banjo Kazooie with rose-tinted glasses. While the camera can be a bit jarring in tight segments and certain areas, it usually behaves and is definitely more responsive than most 3D platformers from the past. Yooka & Laylee control smoothly for the most part, leaving any missed jumps, dropped corners or tight curves feeling like human error, even if it does seem a little inconsistent at times. For the most part, Yooka-Laylee does stick the landing when it comes to movement and gameplay.

However, Rare platformers were always much more than just raw gameplay, they always had a distinct and aware comedic charm to them. Yooka-Laylee is probably most faithful in that sense above anything else, with a highly animated cast of characters who capture the spirit of their former games well, Trousersnake in particular is a stroke of genius who steals the show whenever he’s around. Maybe it’s nostalgia talking, but I don’t feel like Yooka & Laylee have much character at all when compared to the iconic bear and bird of old, but I admit that’s probably the rose-tinted glasses to an extent. The games quips are pretty sharp, but it does tend to break the fourth wall a little too much, but I think that’s more of a mood of the times, as opposed to a genuine complaint about Playtonic’s writing staff. 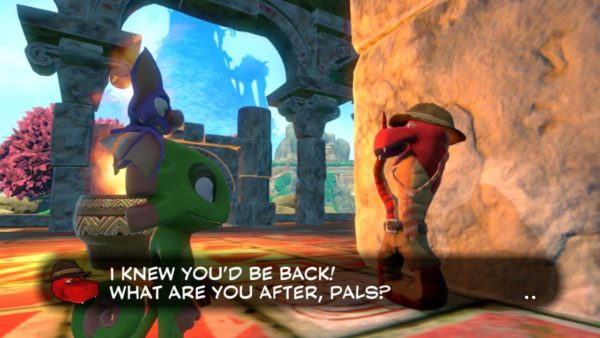 I think to talk about Yooka-Laylee as a whole, you have to try and address the elephant in the room that always appears whenever you’re talking about nostalgia-based, spiritual successor projects. I feel like the general consensus for Yooka-Laylee is that it’s an honest re-creation of Banjo Kazooie and its sequel, but it wasn’t received warmly due to the fact that it was too honest a recreation, and did nothing to improve on the flaws those old-school 3D platformers had. While there maybe something in that, due to the powerful effect of nostalgia, I have to conclude that while I think Yooka-Laylee does use the same formula more or less, Playtonic critically failed to understand where the magic was in Banjo, and how they could recreate it.

The script is there, and the gameplay is more or less a more polished version of what we were given roughly twenty years ago, but ultimately, the level design is what makes Yooka-Laylee average and not great. Big empty spaces, a confusing use of collectibles and a world that feels far too large-scale and barren are what ruins the party for YL. It play well, Playtonic has produced a killer port that looks great, but if you’re looking to recapture that magic of turning on your N64 when you were a little one, you may walk away a little disappointed. 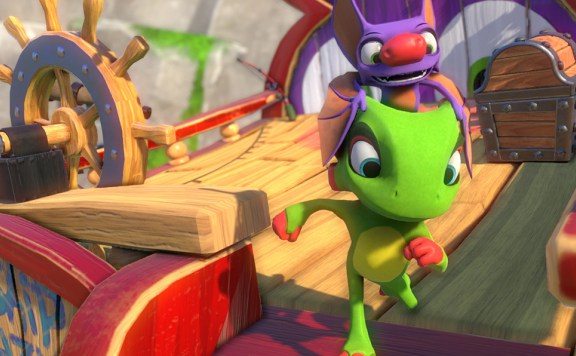 Rating: 7/10 (Extra points for making a great Switch port, and not phoning it in)