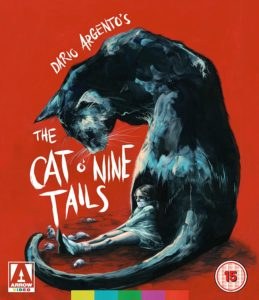 A blind man and an investigative reporter team up to get to the bottom of a murder mystery connected to a pharmaceutical company. 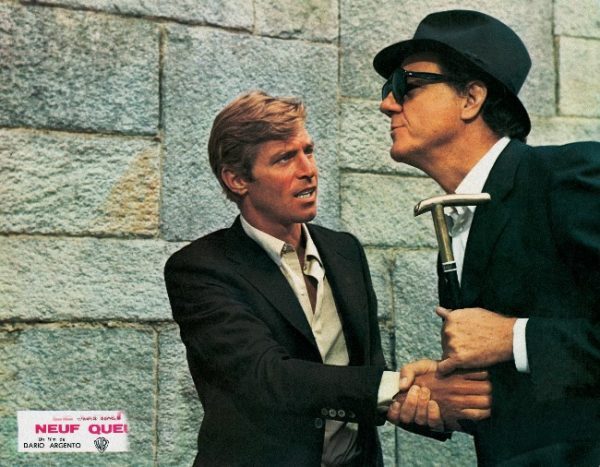 Continuing their trawl through their catalogue of Dario Argento titles to give the 4K restoration treatment to, Arrow Video have turned their attention to the Italian director’s second film, 1971’s The Cat O’Nine Tails, which carries on from the giallo stylings of his debut The Bird with the Crystal Plumage, points the way forward to where he would go with Four Flies On Grey Velvet and Deep Red and yet doesn’t quite pull off anything as inspiring or as satisfying as any of those other movies.

Of Argento’s gialli movies The Cat O’Nine Tails is probably the weakest – something that Argento himself has alluded to over the years – but on the face of it the film carries most of the trademarks that the genre has come to be known for, most of which were pioneered by Argento. There is the nonsensical plot that has more twists and turns than a car chase through the streets of Turin (the movie has one of those as well), a sexy femme fatale with a complicated backstory, the killer’s POV shots, close-ups of all the kills and some (very unsexy) sex as well but it all feels a bit too straightforward and toned down compared to the movies that were made either side of it, although when you are in the company of films like The Bird with the Crystal Plumage and Deep Red then you do need to pull something special out of your hat to stand out.

The film begins in the usual way, with a crime taking place, and we are introduced to our main characters, in this case blind former journalist Franco (Karl Malden – On the Waterfront) and his niece Lori (Cinzia De Carolis – Cannibal Apocalypse) who quickly become partners with reporter Carlo Giordani (James Franciscus – Beneath the Planet of the Apes) as a break-in at a pharmaceutical headquarters escalates into murder when one of the scientists is killed by being pushed in front of a moving train in the one of the standout scenes of violence in the film. From then on, Franco and Carlo dig deeper into the company’s activities as the bodies start to pile up, and then the killer’s attention turns to them. 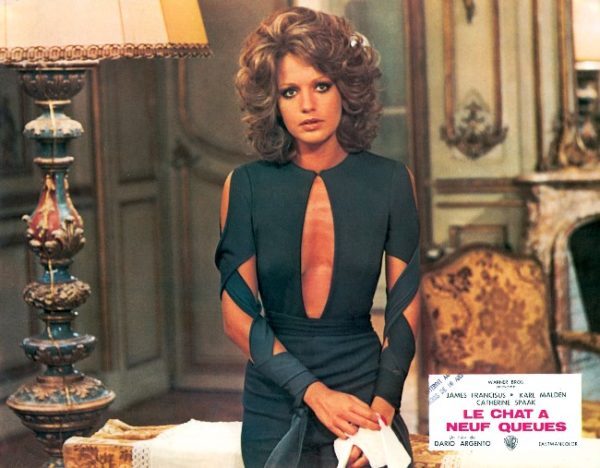 And as previously stated, despite the twisting nature of the plot – which comes with the territory in giallo movies – The Cat O’Nine Tails offers up little in the way of reveals that you can’t see coming. The two main characters are led here and there by their investigations and get introduced to all sorts of shady characters with dubious moral standards, but it is quite obvious from the off who the real villains are going to be and the sense of mystery is downplayed somewhat. The acting is pretty good throughout, with James Franciscus proving to be an engaging lead but unfortunately his scenes with Catherine Spaak – who plays the daughter of the medical facility – fall completely flat thanks to them having no chemistry whatsoever, something that is accentuated during the particularly unerotic sex scene where the pair just seem to lay on top of one another desperately hoping the other actor will take the lead. Whether it was Dario Argento’s direction or simply two people who could not create a spark between them isn’t clear but those moments threaten to bring the film to a standstill just when the story is holding your attention enough to want to see where it is all heading.

But just because the film doesn’t hit in the same way as Argento’s other works doesn’t make it as daunting a task to sit through as some of the lesser gialli from the period. It moves along at a fairly brisk pace for the first half (until those awkward ‘romantic’ scenes) and Argento does a solid job in drawing you in to this mystery, even if the mystery element is hardly a surprise when all is revealed, and apart from a couple of violent set pieces the film holds back on the blood and gore, with the real horrors being Catherine Spaak’s hairdo and James Franciscus’ chat-up lines as opposed to anything Argento could set up. 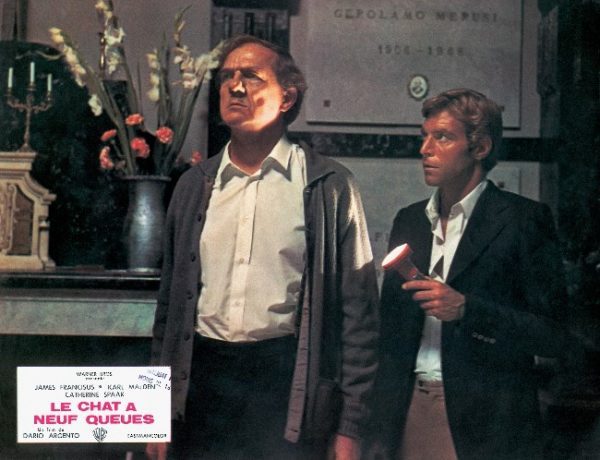 Coming in a dual format package housed in a fancy box with four lobby cards, double-sided poster and collector’s booklet featuring new essays on the film, The Cat O’Nine Tails does indeed look as fresh and sharp as you would expect it to, the bright reds standing out from the fairly plain 1970’s colour palette, and it does look a lot warmer than some of Argento’s other early movies that have been given similar treatment. The extras include new interviews with Dario Argento, co-writer Dardano Sacchetti, actress Cinzia De Carolis and production manager Angelo Iacono that offer insights into their experiences making the film – along with what Argento thinks of it now – and script pages of the original lost ending but the real gem in this bunch is the audio commentary by Argento expert Alan Jones and author/critic Kim Newman who offer up some amusing perspectives with what is becoming something of an entertaining double act for Argento movie commentaries. Overall, The Cat O’Nine Tails is not prime Argento despite its placing in his catalogue of work, although there are glimpses of techniques he would go on to utilise more in better films, but as a relatively straight(ish) thriller it has moments that work better than what a lot of Argento’s contemporaries were doing in films of a similar style, only none of it quite as stylish as what he would go on to do later in the decade. That said, if you own the Deep Red, Phenomena and The Bird with the Crystal Plumage box sets that Arrow Video put out then you’ll want to have this on your shelf next to them, if only for the sake of completion.