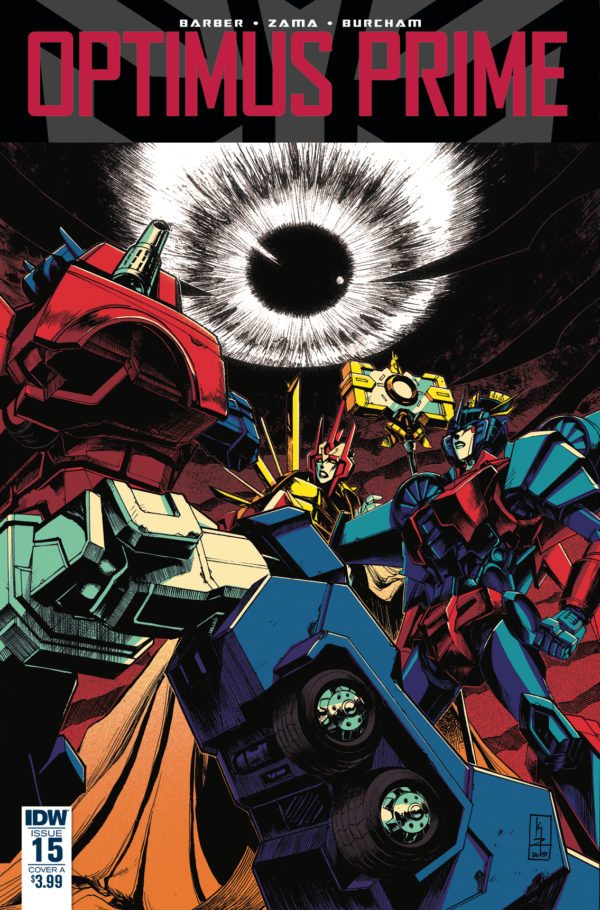 The big threat IDW has been building up in Optimus Prime and Transformers: Till All Are One has arrived as Onyx Prime comes to Cybertron with an apparently captured Liege Maximo in tow. Two of the biggest threats they’ve faced in the last year showing up at the same time is not a good thing and Optimus, Windblade and their allies have to prepare for a seemingly big showdown.

Optimus Prime #15 is mostly a lot of build up as well as catching readers up on some of the event of First Strike and the final issues of Till All Are One, such as Starscream’s incarceration and Windblade’s election as Cybertron’s new leader. It serves as the opening salvo to the new arc and the danger Onyx poses. This could have come off as some heavy exposition, but thankfully it doesn’t come across that way. The exposition feels organic and still introduces new things to the characters, building off some of the recent events. Optimus and Windblade’s relationship, for instance, is still very strained from his choices in First Strike, though there is little mention of those events. John Barber naturally plays off them without going too deep into explanations.

The biggest thing that is revealed is the Mistress of Flame’s past as she recounts first coming across Onyx Prime and some of the events that led to her becoming the Mistress. Its some eye opening information about a character who has largely remained a bit of a mystery since her introduction, coming across as a strict, almost zealous, religious figure. Here we learn more about why she is the way she is and how she views the contradictory nature of Optimus, Pyra Magna and some of the other Cybertronians.

There are also some heavy nods to the series continuity in this issue. Barber digs deep into some of his own history with IDW’s Transformers franchise, bringing back the Dark Cybertron prophecy by putting a new spin on it as well as reintroducing the Ore-13 Energon source that was a significant part of Dark Cybertron as well as the early stories of IDW’s time on the franchise. Between this and the character development Barber employs, Optimus Prime #15 is fairly beneficial to longtime readers without confusing any new ones.

Kei Zama’s artwork is fairly good in the issue. Her work has really improved on the title and its clear she’s become more comfortable with the character designs. Her use of dark shadows also really works in the issue as Onyx Prime comes to Cybertron, making him feel very imposing along with the eclipse he brings. Zama does well with each of the characters, creating nice fluid movements between the panels. Her art is helped by Josh Burcham’s colours, playing well off her dark shadows and making a lot of the images fairly vibrant when Onyx is on the page.

Optimus Prime #15 is a good introductory chapter to the new arc and the threat Onyx poses. After all the build up involving him, it will be interesting to see how this conflict plays out, but Barber and Zama leave a sense of excitement and intrigue with what they’ve done so far.