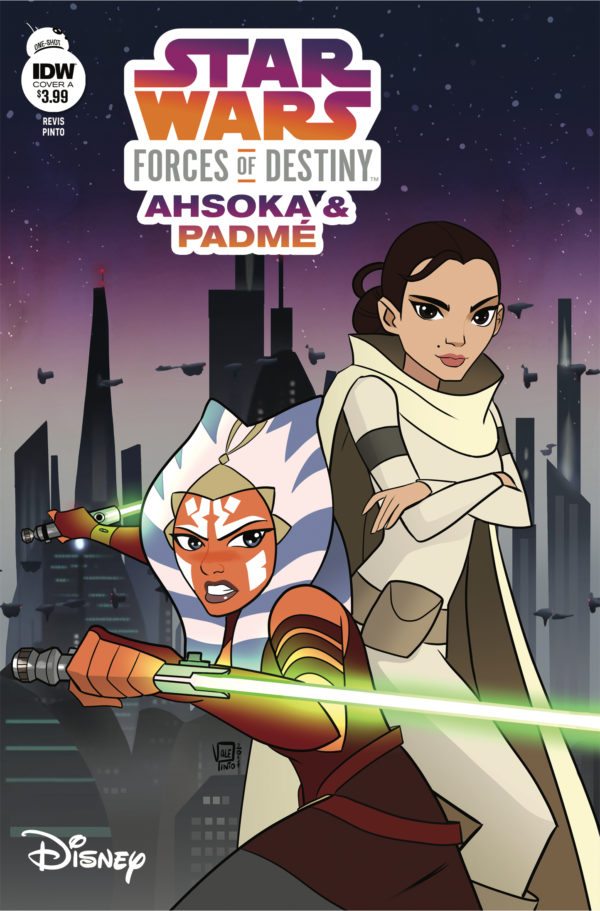 One character who has become a Star Wars fan-favourite over the years is Anakin Skywalker’s padawan, Ahsoka Tano. Introduced in the Star Wars: The Clone Wars animated film, Ahoksa was one of the primary characters in the large ensemble of the television series with a clear arc throughout that series and Star Wars Rebels. The latest Star Wars: Forces of Destiny comic sees her teaming up with Senator Padme Amidala on Coruscant for a quick protective mission.

Writher Beth Revis is no stranger to the galaxy far, far away after having written last year’s Rogue One tie-in Rebel Rising. In this issue she captures both Ahsoka and Padme’s voices fairly well. The introductory scene featuring Ahsoka and fellow padawan Barris Offee is a captivating scene that offers one of the most talkative scenes of all the Forces of Destiny issues. Its great to see Ahsoka and Barris discuss the practices of fighting and the merits of improvisation over sticking to the morals. One of the nice aspects of this is how well it foreshadows later events in The Clone Wars between them.

Ahsoka and Padme were two characters who never got much time together in the series so it is pleasant to see them teamed together here. Padme is written well and has a good report with Ahsoka. Her role is largely trying to prepare for the arrival of some important delegates and asks Ahsoka for some assistance with her security since Anakin if offworld. While some may not always find the politics of Star Wars the most exciting thing, Revis gets through this fairly quickly, but even still does well with the political talk. Padme, of course, gets some time to shine when the action comes as well.

Valentina Pinto illustrates the issue, both with the art and colours, and does a fine job. Her character designs for Ahsoka and Padme match that of The Clone Wars and she does well with the facial expressions throughout the issue. Sometimes, though, her backgrounds look a little bland and there are a couple awkward movements with Ahsoka as she tries a new lightsaber form. Still, Pinto choreographs the action well and gives the issue a vibrant look with her colours.

While some may find the political plot a bit boring, or the ending a tad cheesy, Revis does well with it and captures the essential characteristics of Ahsoka and Padme. Pinto’s art is good throughout the issue with the exception of a couple instances that don’t overly distract from her art’s quality. The discussion around Ahsoka’s growth and potential as a Jedi is thought-provoking and illuminating, especially given what happens to her in Clone Wars and Rebels. Fans of Ashoka and Padme should enjoy this issue for the insight Revis gives.