Tom Beasley sits down with British actress Florence Pugh, star of period drama Lady Macbeth, to discuss her nomination for the EE Rising Star Award at the BAFTAs…

British actress Florence Pugh was today named as one of the five nominees for the EE Rising Star Award at the BAFTAs. The public will now vote on the shortlist of young performers, which also includes Daniel Kaluuya (Get Out), Timothée Chalamet (Call Me By Your Name), Josh O’Connor (God’s Owen Country) and Tessa Thompson (Thor: Ragnarok). The lucky winner will be announced as part of the glitzy BAFTAs ceremony on February 18.

Pugh first became known to audiences with The Falling, in which she starred alongside Game of Thrones actor Maisie Williams as young girls plagued by bouts of fainting at a strict school. She made her name this year, though, with a fierce performance in playwright William Oldroyd’s hard-edged period drama Lady Macbeth and has several exciting projects on her slate.

The actress took the time to sit down with Flickering Myth after the nominees were announced at BAFTA HQ and just a day after her 22nd birthday.

How good a birthday present was this?

Everyone’s now caught on to the fact it was my birthday yesterday! It’s a very good birthday present. I’m over the moon. It’s really wonderful to be up there with every single person there. I’m very lucky.

I think it’s exactly what you said. I think I’m drawn to roles that are very different and very interesting. I look for that. I look for women that inspire me and they don’t necessarily have to be good. They can be bad. I like that and I like that people want to talk and ask questions about these roles, which is incredibly important. After all, we are watching them and supporting or not supporting the characters.

Speaking of tough characters, you’re playing WWE wrestler Paige next in Fighting With My Family.

There’s another example of a role that’s different, but as long as they inspire you, then wicked. Paige was such an amazing role because I got to look into her life and WWE and wrestle and that was a bizarre experience for me. I’ve never been into wrestling, but her story is just so interesting. She’s really cool and she sticks out like a sore thumb. 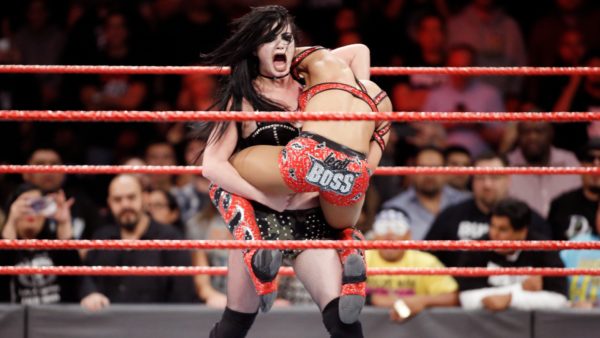 It always fascinates me, as a wrestling fan, when people who don’t really have a background of being into wrestling get involved in that world. What was it like for you to plunge into that?

WWE wrestling, in itself, I think you are either into it or you’re not. It’s not something you can just blend into. I’ve never really looked at it before and I didn’t particularly take it seriously. Then, obviously, I found out about this amazing woman and I started looking into it. Then I looked into the lives and it’s really tough. It’s really hard work.

After doing this film, I take my hat off to anybody who steps into that ring because it takes so much work to get there. It’s not just about the physical work, but it’s mentally what it does to you and the mental games you play with yourself and others. It’s a really hard gig, so I take my hat off to wrestlers.

I know Dwayne Johnson was involved in the project. How useful was he in helping you with the wrestling side of things?

Dwayne was in it and also a producer. He was part of Paige’s real story because he was the one who told her that she was going to go on to Raw and win, so he’s a part of the real story and that was wicked because we reenacted his scenes with Paige. He also taught me how to throw a punch, so that was quite cool and quite interesting.

There are very few people better to learn how to throw a punch from than The Rock!

I remember the evening we went on and did Monday Night Raw. There’s this moment before they let the audience in where all of the wrestlers are going over their moves and it’s quite intimidating because all of them are basically hanging around the ring. Obviously, they don’t think much of me because I’m an actor coming in pretending to be a wrestler, so I am feeling really weak. I step in and Dwayne just marches over and says ‘look at me, it doesn’t matter about them, look at me, you’re fine’. I was like ‘yeah! I am fine’ after that. He’s a really good guy.

Having entered their world, does it give you more respect for wrestlers who enter the acting world?

I think both wrestling are acting are pretty brutal. Both are as brutal as the other and that’s what’s really interesting because you start to see the similarities between the two and it’s very cut-throat.

What else have you got in the pipeline?

I have actually got all of the films that I’ve done coming out and I’ve seen none of them. I have only ever seen three things of my work so that’s going to be an interesting year. I have no idea what they’re going to be like so if it all goes downhill, apologies BAFTA. I’ve got Fighting With My Family, The Commuter coming out this month, King Lear, Outlaw King and Little Drummer Girl, which I’m doing at the moment.

That’s a lot of stuff!

If you win this, it’s doubly fantastic!

[laughs] Then it doesn’t matter!

Who would you like to win if you don’t win? I think you know that Josh O’Connor said you.

I have to say Josh. I think he’s lovely. Our films were born at the same time and it’s been really wicked to share everything with someone. Just before Christmas, we both won BIFA and now we’re here together again. It’s really wicked.

They’re both great films – yours and his.

They are great films!

Thank you very much for your time, Florence Pugh!