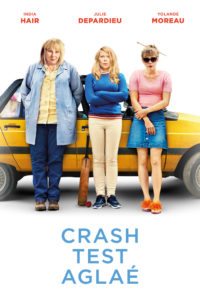 A young worker learns that her factory is going to be relocated abroad, and surprises everyone by accepting to go to India in order to hold on to her job.

Aglaé (India Hair) is a young woman dedicated to her job. So dedicated in fact, that she’ll go to any lengths in order to hang onto it. When she hears that the factory where she works as a car crash test technician is about to be relocated to India, she decides that she wants to go with it too. Provided with an ‘offer made to refuse’ by her bosses,  she does just the opposite and finds two colleagues in Liette (Julie Depardieu) and  Marcelle (Yolande Moreau) who agree to go along with her for their own different reasons. Squeezing into a battered old motor, the trio head off down the road taking a direct route from France to India. As might well be guessed, the journey doesn’t quite go to plan.

What follows is a charmingly funny comedy drama covering a lot of mileage both by road in the movie and subject matter in its lean 85 mins run-time. A debut feature from Gravel, the film manages to say a lot about friendship, family and personal relationships, while also setting its sights on the commercial world of work and corporate society.

The character of Aglaé  herself is a convincing and sensitive portrayal of someone who is unable to express empathy and literally has a single point of view. This resoluteness and inability to see outside of her own issues is well drawn out, and after being presented with a background of an irresponsible mother leaving her to her own devices throughout childhood, the audience can begin to understand something of her plight and desperation to keep hold of any defining features in her life. Rather than simply showing her as a figure of fun –  although she does do and say some unintentionally amusing things – we are always with her hoping she will succeed in getting to India and finding out more about the world, and herself. Great support is provided by the two co-stars Depardieu and Moreau, who reinforce the film’s standing as a clear headed – and often funny – examination of women’s standing in France and beyond.

Bringing out a fresh and original take on the road movie, Crash Test Aglaé is a celebratory film of humanity and warmth, showing that there are many different ways to reach an understanding of who we are and what we want.

Crash Test Aglaé is available to view as part of MyFrenchFilmFestival showing online until 19 February 2018.