A gritty crime saga which follows the lives of an elite unit of the LA County Sheriff’s Dept. and the state’s most successful bank robbery crew as the outlaws plan a seemingly impossible heist on the Federal Reserve Bank. 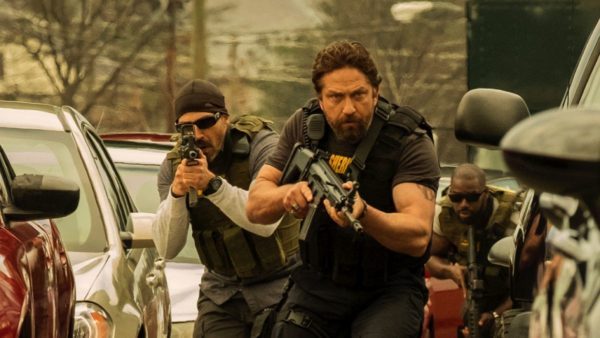 If there’s one thing Den of Thieves is good for, it’s reassuring audiences that writer/director Christian Gudegast has *definitely* seen Michael Mann’s Heat. No question. Gudegast undoubtedly flipped Heat on one night while writing this rugged thug cons versus thug cops standoff, which lead to connective ties in multiple scene by scene comparisons. Inspiration, homage, influence – whatever you call it, Den of Thieves is confoundingly familiar from structure to “gritty” character designs. Something you’ll have *plenty* of time to mull over during the film’s catastrophic 140 minute length.

For a film that’s stretched so exasperatingly thin, Gudegast’s premise is rather simple. It’s bleary-eyed Major Crimes badboy Nick Flanagan (Gerard Butler) against recently freed heist machine “Merrimen” (Pablo Schreiber). They both command rugged crews – one bad, one worse – and their paths cross when Merrimen plans his most ambitious heist *immediately* after leaving prison bars behind. He wants to directly rob “The Fed,” hitting “the bank’s bank” despite massive hordes of armed governmental security detail. Flanagan knows something’s up – especially after interrogating Merrimen’s driver Donnie (O’Shea Jackson Jr.) – but the game doesn’t end until a winner and loser are declared. The chase, as they say, is on.

Unfortunately, Den of Thieves is quite the marathon at over two hours of wasteful exposition and nonsense additives. So much time is spent asserting Nick Flanagan’s status as a womanizing, doughnut-chomping, crime-scene-polluting renegade asshole who no one tolerates except for his equally tooled-up team – but we never grasp WHY. What’s the point of him texting his wife instead of a late-night fling (call-girl, presumably), if only to break his family up in the first act? Why insert a pointless dinner sequence where he crashes now ex-wife Debbie’s (Dawn Olivieri) date only to have her disappear not even halfway into the film? There’s backstory, but nothing meaningful by way of Flanagan’s rough-and-drunk dedication to “overtime” – not like the film even pretends to care about non crime subplots.

It’s bad enough Gudegast milks “no bullshit” undercover stereotypes beyond legality. Flanagan blows his cover, endangers his inside man, ignites a destructive heavy artillery shootout across thirtyish cars full of pedestrians – this is the kind of copland bullshit my retired lawman father would curse out for stupidity. Take liberties to entertain audiences, I get it. That doesn’t mean California streets can become the Wild West, to the point where Flanagan utters lines like “We *are* the bad guys” or “We’ll just kill ya, less paperwork!” I’m all for grungy, teeth-punching police thrillers (Training Day/End Of Watch), but only given something remotely plausible to work with. 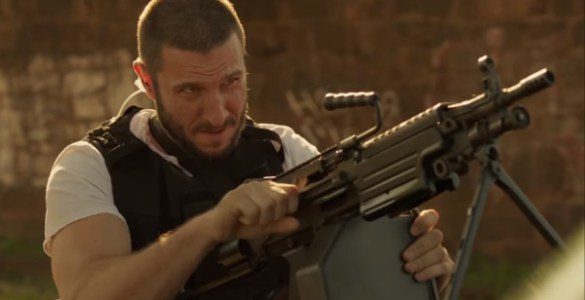 Not much can be said about Merrimen’s greedy masterminds, former militants who’d rather die than get arrested. Expect setup dialogue about how their prospective heist has been attempted some 50 times over, with no previous break-in ever passing lobby security. How could Merrimen’s gang ever accomplish such a – I mean, why even bother fooling you. There’d be no conflict without a perfectly laid plan. All you need are EMPs, Chinese food distractions and perfect timing to a millisecond. Quick in, quicker out. Maybe a wrench or two thrown in worth momentary tension? Not like it matters given my only cognizant recollection after leaving this screening was the last 15 minutes of public bloodshed.

Performances are as expected. Butler chews through thick American insults slung towards vegans and football players with sloppier handling than the pastries he sucks down (why is he eating or drinking for, like, his first five scenes). Schreiber is the overconfident aggro bro (well, that’s EVERY character), 50 Cent gets all of seven or so lines (and one pre-prom “warning” for his daughter’s date), Evan Jones grimaces as the neck-tatted techie sidekick he plays in every underworld cash-in – O’Shea Jackson Jr. is the only talent who leaves a real impression thanks to his ridiculous Ocean’s whatever inspiration. The rest of the characters are nameless, cuss-spewing meatheads who shoot first and punch later because that’s how justice is served on the streets. Complete with Butler’s constant headbutting against FBI head honchos.

Maybe Den of Thieves would be a more forgiving heist muckabout at 90 minutes, but why even daydream? As is, you’ll wonder what half of Nick Flanagan or Merrimen’s scenes are building towards while there’s more exciting business worth our attention. This is a bro-first, cumbersome action slog that overcomplicates and simplifies at the same time. Too many disjointed details forgotten by easy-as-pie reconciliations. I’ll give Christian Gudegast credit for orchestrating the most ridiculous “caught cheating” moment I’ve witnessed in quite some time, but then, as the film so often does, a single too-perfect-for-reality line brings momentum to a screeching halt. Anyone up for a trip to the editing room?