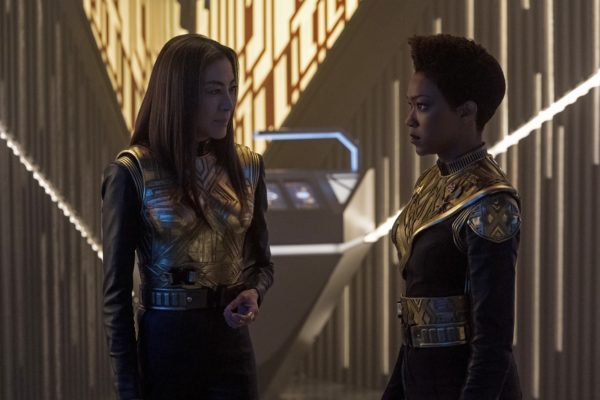 Haven’t you ever been afraid of a ghost?

There is an obvious part of this episode that demands a degree of discussion – the twist at the ending. I’m going to hold off on that for a moment, though; if nothing else, there’s a danger that just a few minutes of the episode will dominate the review of an entire story. Granted, they’re an important few minutes, but still.

Although, having said that – at just 37 minutes, this is one of the shortest episodes of Star Trek: Discovery. It’s something that might, I can’t help but wonder, contribute to the feeling that this instalment was a little slight; it’s difficult to articulate exactly why, but there was something a bit insubstantial about this episode.

Undeniably, there were nice ideas. The dynamic between Burnham and Emperor Georgiou was conceptualised quite well – the betrayal of mirror-Burnham paralleling the betrayal of ours, it allows for a neat piece of character work. I think Burnham was perhaps a little too trusting of Georgiou, certainly (hopefully something they’ll return to next week and examine, rather than taking it at face value), but that does set up a nice potential bookend for the series – just as it began with Burnham betraying Georgiou, it’ll end with Georgiou betraying Burnham. And, of course, there’s still a lot of nice details to flesh out the mirror universe – Sonequa Martin-Green pitches the revulsion at realising she wasn’t picking a Kelpian as a slave but to eat perfectly.

Still. Something about it just felt a little empty. With so many ideas to pick up on from last week, ‘Vaulting Ambition’ felt like it lacked just that. Certainly, it feels like Tilly’s plotline has petered out, and indeed the rest of the Discovery crew – even Ash Tyler didn’t get a great deal of focus, though I suppose that’s being saved for his reunion with Burnham. It’s a shame, I guess; it feels like there’s another ten minutes of little character moments missing from this episode.

One of the things that I criticised the series about a few episodes ago was killing off Dr. Culber – in short, I was generally unimpressed that, after all the significance placed on the fact Stamets and Culber were Star Trek’s first gay characters, Culber was so casually killed off. There’s a lot to be said in terms of fridging and ‘bury your gays’ tropes, but I think it’s… particularly egregious given what these two characters meant for Trek in terms of finally addressing one of the franchise’s notable blind spots.

However, following the episode, various members of the production team and actor Wilson Cruz all said it wasn’t quite so simple, noting as well that GLAAD had been consulted about the storyline. So, fair enough, perhaps there was more to it – but, on the basis of this episode alone, that doesn’t quite seem to be the case.

Certainly, the scenes Culber and Stamets shared together worked nicely this week. They would – Wilson Cruz and Anthony Rapp are both talented performers, and they share a genuine chemistry with one another. It’s telling, though, that their seemingly final goodbye returned to them in their matching pyjamas, discussing the opera – it’s essentially the only scene they shared that’s significant enough to refer back to. We didn’t spend much time with them; we didn’t spend enough time with them. That there was an emotional resonance at all is largely down to Cruz and Rapp as screen presences.

And, to be clear – I’m saying this because I quite like Culber, and I quite like Stamets too. I like the too of them together, and I’d like to see more of them together. What it comes down to, in its simplest form, is that I think keeping Culber alive offered much more storytelling potential than his death – and, in the long-term, he’ll be missed.

Maybe there’s still more to it than what we saw in this episode. I hope so. 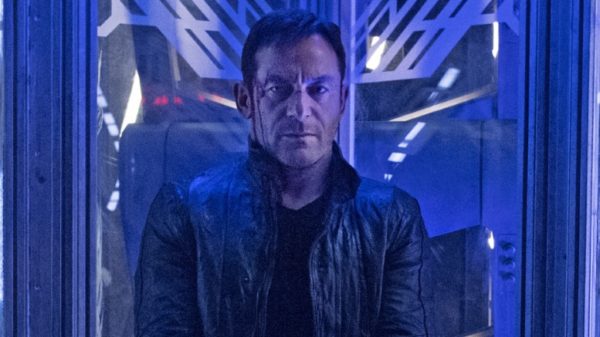 Of course, though, there is one part of this episode that must be mentioned: Captain Lorca is, in fact, from the Mirror Universe, and he’s been manipulating Burnham and the crew of the Discovery throughout the series in the hopes of returning home to finish his coup.

I am in… well, no, I’m not in two minds about it. I just don’t particularly like the idea.

Mirror-Lorca has been something of a popular fan theory for a while now – second only really to ‘Ash Tyler is Voq’ in terms of how ubiquitous it was, but largely lacking in the same ancillary details to substantiate the idea. Indeed, more often than not, the idea that Lorca was from the Mirror universe was borne from a rejection of the idea that someone like him wouldn’t exist in the main universe – essentially a rejection of the nuances of the character, dismissing them because they were a bit different from the Star Trek captains we’ve seen before. Sure, there’s since been a couple of vague hints, but that’s largely always been the starting point.

I am not so sure how that I feel now it’s been confirmed to be the case.

Still, though, I’m going to try and reserve judgement. It’s not like the idea doesn’t have potential, after all. Certainly, I have a few concerns – mainly, that we’re set to see the character lose a lot of nuance, reduced to a more straightforward villainy. Particularly, in fact, if it does turn out to be the case that Lorca’s interest in Burnham turns out to be informed by an abusive sexual dynamic – that’s… well, there’s a lot to unpack with that, which frankly I am not sure I want to delve into right now. My hope, for now, is that it’ll quickly transpire that Emperor Georgiou isn’t someone to be trusted (you’d think that’d be obvious, but hey) and Mirror Lorca is in fact a revolutionary, trying to shape the Terran Empire into something better.

But, yes, generally speaking… not such a fan of the idea. We’d perhaps always been heading to a point where Burnham would once again have cause to mutiny – this time for the ‘right’ reasons – but I do still have some massive reservations about a lot of this. Mainly, that’s because Mirror-Lorca was framed as a sexual abuser; without that tendency towards edgy ‘darkness’, I’d probably have been more receptive of the idea. Currently, though, just yuck.

I’m almost inclined to hold off on a rating entirely – I’m not convinced that any number value I could assign to this episode would have much meaning without having seen the next one. (Arguably a flaw in and of itself, as this episode doesn’t really stand on its own so well.) But, nonetheless, let’s say…