Matt Rodgers on the rise of Blumhouse Productions…

If you peek through the window at Blumhouse Productions, past the levitating chair in the middle of the room, and the dank haired girl performing a spasmodic rendition of the robot to creepy effect, you’ll see an empty shelf, suspended by cobwebs, on a wall with an insidious crack running from floor to ceiling. Potentially, on March 5th of this year, amongst Sinister masks, and hypnotic teacups, there could sit an Academy Award for Jordan Peele’s Get Out, which would not only be a crowing glory for that film’s journey, but another landmark moment in the 18 year rise of Jason Blum’s ghost train production company.

Their working model is to produce independent movies and release them through the studio system, more often than not to huge multiplier figures at the box office. What singles them out for praise, aside from the financial acumen, is that Blumhouse Productions have become synonymous with quality, especially where horror is concerned, a genre so often handicapped by cyclical repetition, but which the company, utilising untapped talent like James Wan and Scott Derrickson, both of whom have gone on to helm Aquaman and Dr. Strange respectively, to redefine the landscape.

Success has meant the opening of their Tilt division, which allows them to release even smaller genre efforts under the Blumhouse umbrella, such as Eli Roth’s Green Inferno and Joe Carnahan’s criminally ignored slice of lunacy, Stretch. Perhaps more impressive are the occasional steps away from horror, although Whiplash might actually fall into that category with J.K. Simmon’s Academy Award winning brutality.

So come with us as we “tiptoe through the window” and take a look back at the best moments from the Blumhouse vaults, beginning with the origin of that haunting ditty… 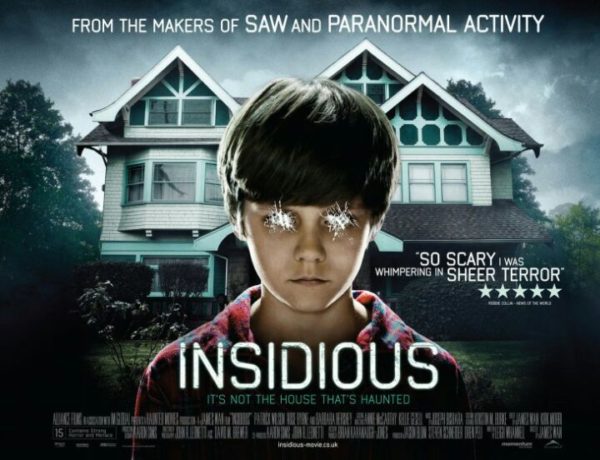 Nobody understands the mechanics of modern horror quite like James Wan. He balances cat-in-the-cupboard scares with moments of earned terror. He understands the power of a fleeting indelible image as well as a loud noise. So when Insidious appropriately crept up on audiences to the tune of $97 million worldwide, off a budget of $1.5 million, it contained enough moments of spine rattling horror to fill this entire feature, let alone one selection.

The peripheral appearances of the small boy that cause the audience double take, a reaction that Wan loves to play with, the Darth Maul jump scare, or the dancing ghost, are all still scenes that you’d be reluctant to watch in this playful blend of del Toro visuals and Argento garishness.

The most memorable scares come from the use of the baby monitor, which begins to pick up a lot more than static whilst Rose Byrne’s soon-to-be-suffering stay-at-home mom is left alone in the new family residence. It all culminates in a scene that speaks to the genre classics like Halloween (which Blumhouse are in the process of resurrecting), in which the simple use of a static shape is enough to get the geese bumping and the audience jumping. Take a look.

Aliens. So often seen hiding behind a Bill Pullman defying fleet, or the soft focus cutesiness of Steven Spielberg’s veneer, were given the genre treatment in Scott Stewart’s home and alien invasion, family horror Dark Skies.

It’s an interesting movie, with a brilliant cast, that doesn’t always make the most of it’s premise, unsure of whether it wants to be a psychological horror, or straight up monster-of-the-week movie, and it’s when it settles for the latter that it’s most effective.

There are some creepy moments, largely revolving around the behavior of Kerri Russell’s youngest son. The hollowed eye socket scene is particularly disturbing. However, it’s when the film plays with the conventions of the grey, the term given to the archetypal extraterrestrial look that cinema has set as standard, that Dark Skies scare tactics work. Instead of the dopey looking fellas wandering out of the ship at the end of Close Encounters, we get one looming over a child’s bed in the dark, with jump out of your skin results.

The film that started it all off for Blumhouse, Orin Peli’s found-footage flick was a surprise phenomenon. The concept and outcome would be an echo of the success achieved by The Blair Witch Project almost a decade earlier.

Terror at home is a blueprint for a lot of the Blumhouse narratives (Insidious, The Conjuring, Annabelle: Creation), preying on belief that we should feel safe inside our own four walls has become a lucrative angle to mine, and Paranormal Activity is a prime example.

It’s a proper leave your lights on when you get home movie experience, during which the beered up oiks in row Z get quieter and quieter as the film ratchets up the tension. At the heart of it are a young couple that believe they’re being terrorised by things that go bump in the night, so set up a series of cameras to catch the nighttime activity.

Most of what works is kept off-screen, sticking to the adage that when it comes to horror, the scariest images are best left to the imagination, but possibly the most iconic moment of Paranormal Activity is the scene in which Katie Featherstone is slowly dragged from the bed and through a doorway that the audience have been nervously transfixed on. It’s enough to make you never want to sleep with your leg sticking out from beneath the duvet.

You can keep the endings to any of the Rocky movies, or the showdown between Neo and Agent Smith, because one of the greatest climactic showdowns in modern cinema is between an angry man and a little drummer boy.

Damien Chazelle’s exhausting drama Whiplash begins like a quiet character study, the slow rhythmic tapping on the drumskin, before working in the astonishing acting as an accompanying beat, and then exploding into a bloody knuckled crescendo of a finale that is one of the best performed, edited, and emotionally tense scenes in recent memory.

There’s no point in rushing or dragging this praise, words can’t do it justice. Count it in……

From start to finish, it’s an exercise in unsettling the audience on a primal, societal, and prejudicial level, prodding you in the cerebrum, tickling your funny bone, scratching your chin, and testing the quality of your undergarments.

It’s such a rich narrative when it comes to picking your favorite scene. There’s the descent into the sunken place, the layered post roadkill conversation with the police officer, Bradley Whitford’s pro-Obama statements, the multiple twists, or any time that TSA Agent Rod becomes the audience projection/hero.

Our favourite moment from Get Out is a seat shifter of the highest order, and comes early on in proceedings, when Chris has stepped away from the lunacy of the Stepford Wives house for a forbidden smoke, only to be confronted by the groundskeeper, Walter, running at full pelt whilst a Bernard Herrmann style string score amps up the anxiety. There’s no escape, and it’s terrifying.

It’s credit to Blumhouse’s consistent output that there’s no room to discuss the doozy of a concept that is The Purge, Jessica Rothe’s performance in the excellent Happy Death Day, the emergence from the darkness of The Conjuring 2’s nun (soon to be seen in Corin Hardy’s spin-off movie), the diaper face-splat from M. Night Shyamalan’s The Visit, and the brilliance of James McAvoy’s multi-faceted turn in Split. So let’s just hope that the next 18 years are just as impressive.