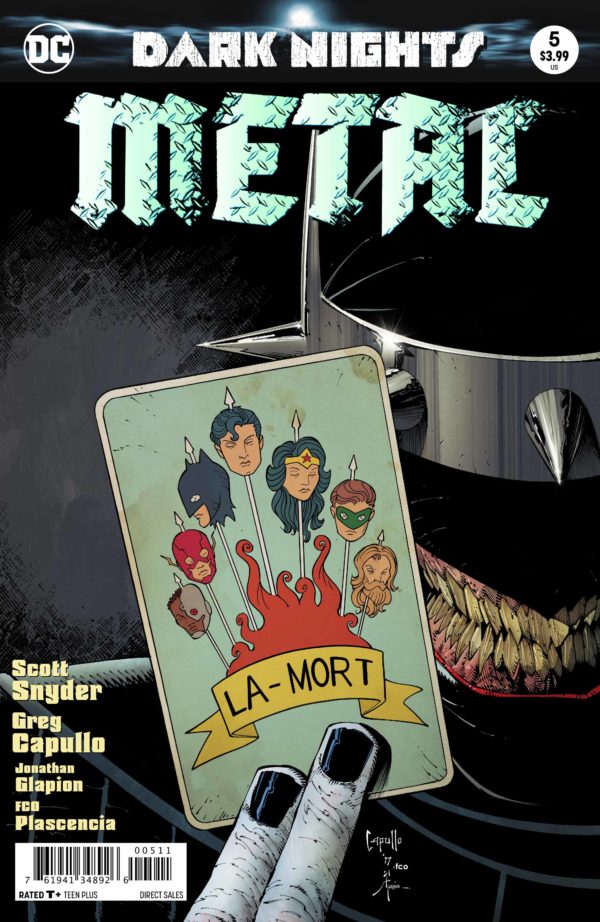 Scott Snyder and Greg Capullo’s event series Dark Nights: Metal has been a crazy ride ever since it began last summer. We’ve finally reached the penultimate issue with Metal #5 is what is so far the series’ best issue yet. As all the heroes of the DC universe race on multiple fronts to prevent Earth from sinking into the Dark Multiverse, the Nightmare Batmen make their final move to conquer everything. Its an exciting issue that offers a small glimmer of hope among the issue’s bleakness while delivering many interesting development as well as awesome moments.

Snyder handles the large ensemble cast fairly well as he bounces between the actions of Batman and Superman, Wonder Woman and Hawkgirl, Aquaman and Deahtstroke to Green Lantern and Mr. Terrific. There’s a nice sense of balance between the three groups and each transition never feels forced or rushed. Each group gets equal time and faces their own set of revelations in their attempt to stop these evil forces from taking over. Its definitely a nice change as the large cast has felt a bit jumbled in the series’ previous issues.

As well as balancing the number of characters together, Snyder does very well with their characterizations. Batman is seen here getting his groove back in an interesting reversal between him and Superman where Batman is acting as the ever-optimistic figure while Superman is falling in despair. However, Snyder’s Wonder Woman steals the show as he encompasses everything great about the character in her scenes, from her bad-ass nature to her compassion. She arguably has the best line of the issue towards the end as she leaps into the fray.

The issue’s story moves at a brisk pace, but again it doesn’t feel rushed. During the quieter moments Snyder takes his time to develop the characters and their relationships, exploring the very unique pairings. Aquaman and Deathstroke have a very interesting and fun back-and-forth while a fan-favourite character makes a fairly grand return in these pages. Several questions are also answered along the way, such as why Plastic Man, of all the heroes, seems so important in this conflict.

Seeing Greg Capullo work on nearly every character in DC has been a treat, but he does some great work with them here. The choreography in the fight between Wonder Woman and Black Adam is well done and Capullo adds some cool imagery of the other characters in their separate struggles. The chase Batman and Superman run through is quite evocative, almost looking like they are escaping the pits of hell. The one area Capullo excels at though are his facial expressions, especially during some of the quieter moments where the emotion is emphasized more so than the action.

And that’s where Dark Nights: Metal #5 really comes to life. For a book that is so full of action beats, Snyder and Capullo give some great emotional beats that let you feel what the characters are going through, whether its sharing in their despair or fist pumping at some of the book’s best moments. Its certainly a great issue that sets up the double-sized finale very well. Fans of the DC universe and out-of-the-box stories will not be disappointed by what this team has delivered in this penultimate issue.