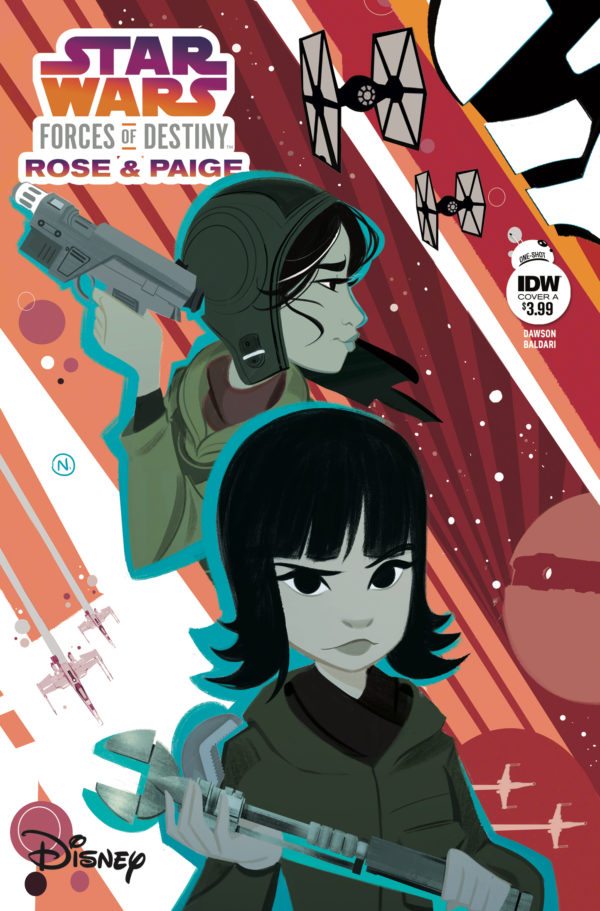 The final Star Wars: Forces of Destiny comic from IDW focuses on two new characters to the franchise featured in The Last Jedi: the mechanic Rose and her gunner sister Paige. This issue, written by Phasma author Delilah S. Dawson, is the most kid-friendly issue of the series. The issue focuses on Rose trying to help the Resistance traverse the rough terrain and jungles of D’Qar while overcoming her own self-doubts.

The issue’s theme plays a little heavy-handed as Rose struggles through her doubts and Paige tries to keep her spirits up. Her development here, though, matches what we see when we first meet her in Last Jedi, where she’s a nervous young girl who hero worships all the upper level Resistance members. There’s a couple moments where she clams up in the presence of Leia. Still, though, Dawson pushes forward the theme of self-confidence a lot, especially towards the end. Since the book is geared towards younger readers, though, its not that bad.

We didn’t get much time with Paige before her sacrifice in The Last Jedi so it was nice to see her relationship with Rose here. They really were a yin-and-yang as Paige was the more confident one between the two. However, even though the issue is titled Rose & Paige we don’t even get to know Paige enough as the issue focuses more on Rose. I suppose that’s to be expected since Rose had more of a role in the film, of course, but it could have highlighted their relationship a bit more.

Nicoletta Baldari’s art is good for the most part, but definitely has a Disney look and feel to it. Baldari does well with Rose and Paige’s facial expressions throughout the book and some of her environments are well illustrated. The colours she uses for D’Qar’s jungle are vibrant and varied, giving the issue a unique look to it. Sometimes, though, the art doesn’t quite work. The sisters don’t look too much like their film counterparts, for example, and this is especially the case with Leia. Baldari’s interpretation of Leia doesn’t look too much like Carrie Fisher and her face seems to change whenever she appears.

Star Wars: Forces of Destiny – Rose & Paige is a good enough issue for Star Wars fans, even if the themes come across heavy handed here. Dawson writes Rose well, but we don’t get to learn much more about Paige which is a shame since she has one of the most pivotal moments in Star Wars: The Last Jedi. Baldari’s art works, but every now and then it doesn’t come across quite well with how she depicts the characters. Overall this may be the weakest issue of Forces of Destiny, but it is still somewhat entertaining, especially for the readers its aimed at.