My trilogy of Ash vs. Evil Dead interviews has come to an end, and of course, I had to save the Chosen One till last. He’s the slashiest, shootiest, and grooviest human being on the planet. He is the one and only Bruce Campbell. 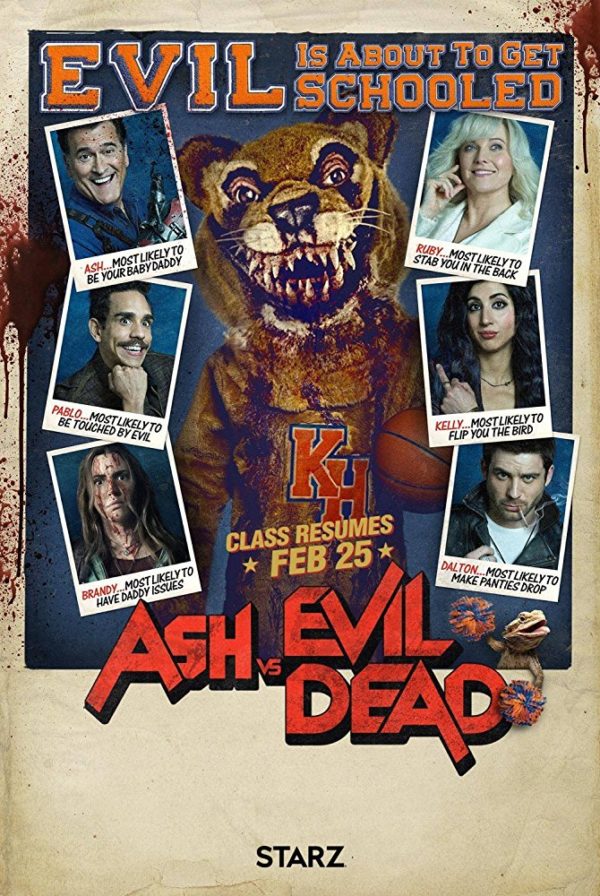 What’s it like jumping into the same character? Have you got used to it or do developments keep things interesting?

“It all makes it new because in the first three Evil Dead movie, Ash is fundamentally a two-dimensional character, cracking jokes and blowing Deadites away. But he’s slowly been morphing into something more. The nice thing about coming back to this character nearly twenty-five years later is that I can bring with me twenty-five years of acting experience. I’m best known for a character I played when I didn’t know what I was doing, so it’s nice to go back and apply my experience. So as a result, Ash is starting to glacially grow. This season he has a daughter, so he has to try and save the world and raise his daughter at the same time. He even has to fulfil a prophesy this season. We’re really trying to keep this guy going. But, he’s still the kind of guy you want to sit down and have a beer with. He’s nobody special.”

What was the most enjoyable part of making this season, and what are you most looking forward to showing people?

“The last two episodes. I’m dead serious. Those last two episodes will basically blow your shit away. The gloves are off this season. We’re going to wrap some stuff up. Some big storylines are going to come crashing to a halt. By the end, nothing will ever be the same.

“We never know how long a television show will last; sometimes they’re cancelled in the off-season. So as filmmakers, we didn’t want to leave our viewers with any kind of bad impression or incomplete thoughts. This season will have a very self-contained feeling. And depending on what happens with how well it plays, if this is the last season, it’ll actually play very well.”

I take it that’s not you calling off season four Just that you want a real story arc to form over these last three seasons?

“Oh we’ll continue as long as Starz is interested in doing it. We will be ready with further stories. I’ve been on a show that got cancelled in the off season before and it’s not a pleasant thing. But it is a reality of the business so we were like, ‘let’s make sure, just in case this it, we make people feel good about it’. So I think people will feel really cool about this season. But ready for more if four comes along.” 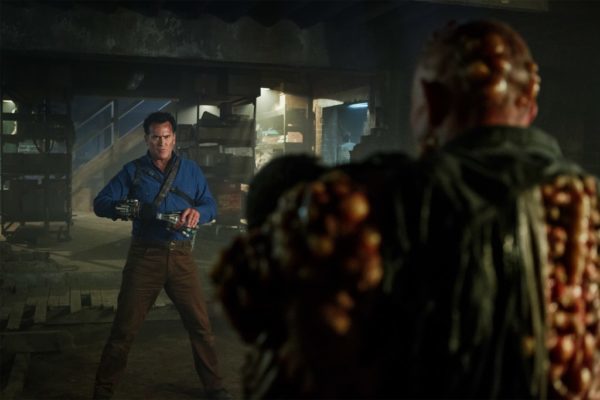 I saw you talking about how amazing the stunt team were on Ash vs. Evil Dead. I know you say that you like to stand there and look pretty while your double does the hard work, but do you ever feel the desire to jump in there and give some of the stunts a go yourself?

“Well look, I’ve pulled my hamstring two years in a row. I’m always getting beat up. So I still do more crap than most actors. But it comes to a point where it’s just smart to let people who are more supple than you do it. Having said that, I still do the beginning and end of every fight. They’re doing the middle part, but I’m doing the beginning and end, so you still have to show up and do it, step on the gas. It’s plenty physical.”

I noticed in season two there was a little throwaway line to you going back to medieval times. I know there was some problems originally with getting the rights to Army of Darkness. Is that all sorted now then, and can we expect to see some more references to Evil Dead 3?

“Well actually there wasn’t any rights trouble. Sam and Rob and I are always going to be part of the original Evil Dead, and we’ll always have the rights to do that forever – guy, shotgun, chainsaw, book – that combination is all ours. But when you change elements, whether its medieval or this character or that character, you may bring along new partners with you from subsequent movies that you don’t want. So we do a lot of elimination by choice regarding which elements we included in the series and which ones we didn’t, based on who we wanted to partner with. It’s not just a straightforward thing.

“Also, Army of Darkness is Army of Darkness. There’s no need to go back and do it again when you can go and rent the movie. Fans get hung up on weird shit. We’ve already had time travel; we’ve already done that in season two. Though I should mention that time travel has not been ruled out for season three. All the wonderful Evil Dead elements will be in there, along with a bunch of new stuff. We’re introducing the Knights of Sumeria, another very anti-demonic cult that’s going to feed into the Joseph Campbell mythology that we’re going to pry open. Ash is in an ancient book, and he is the chosen one. Why?

“But yeah, we’re hoping to entertain people on multiple levels this season. We’re giving them the visceral stuff, the gags, and also a little bit of myth, as well as bringing stuff to a head. You can only hang around the hero’s home town so long before he’s forced to go out on a new journey. Elements will be wrapped up this season that will never come back.” 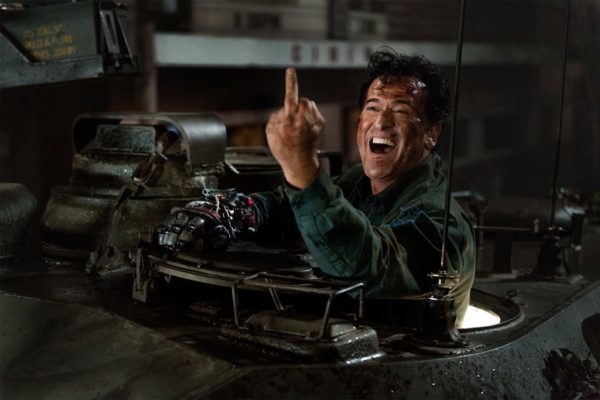 You’ve got a few new faces this season with Arielle Carver-O’Neill and Lindsay Farris. I take it they were just as wonderful to work with as everybody else?

“Yeah, they were great additions. You’ve got Arielle and Lindsay, who play my daughter and this Knight of Sumeria guy, and they’ve been fun to have. Newcomers are always fun to have because you get to watch them be tormented.”

Jumping way back in time now, legend has it that Stephen King helped make the first Evil Dead successful. Have you ever met him, and would you ever want to work with him?

“I never met him, but I’ve always spoken glowingly of him and will continue to speak glowingly of him because he was instrumental not only in the success of the first Evil Dead but also the second. Most people don’t know that. He saw the first one at the Cannes film festival and quoted it as ‘the most ferociously original horror film of the year’ in the Twilight Zone magazine, I think. So we asked him for permission to use that quote and he said yeah. He was just really gracious about it. I think we’d have to say 1983, to put a stamp on it, because it wouldn’t be an evergreen quote. ‘The most original movie of the year,’ but if you keep putting it out, you know…

“And then for part two, we were having trouble getting financing, and a random crew member that we had to let go because the financing wasn’t coming into place wound up working on Maximum Overdrive, which was being directed by Stephen King. King ran into him, chatted to him, asked him what he was doing there, and the crew member said he was trying to work on Evil Dead 2 but they didn’t get the money. Stephen king goes, ‘What? That’s ridiculous’ and goes to Dino De Laurentiis and says, ‘you guys should make this movie’. The next thing you know, we’re in Dino’s office and the deal was made in about half an hour. So great kudos to Mr King.

“As far as working with him, who knows? He’s one of the most famous guys on the planet and just wrote the most successful horror movie of all time. That’s pretty damn cool. That guy is impressive.” 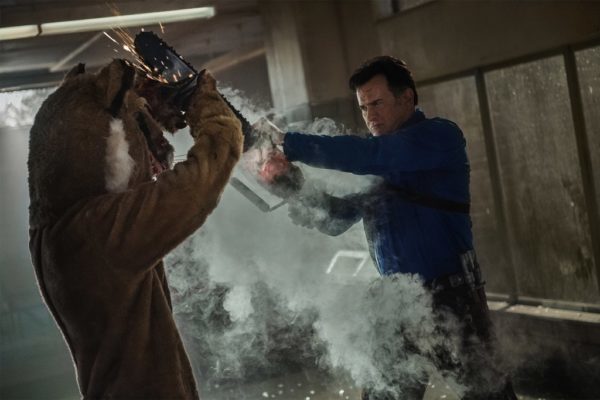 Obviously, you guys all have amazing chemistry on screen, and from what I understand you all get along really well in real life too. So I’ve got to ask: when you go out and hit the dancefloor, who’s a total Deadite, and who’s totally groovy?

“It depends on how much alcohol’s involved. We can all turn into zombies, I’ll tell you that. But usually we’re heroic.”

Ash vs Evil Dead season three premieres on February 25th. Catch it on the Starz network.

Many Thanks to Bruce Campbell for taking the time for this interview.