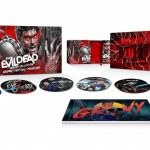 Lionsgate has announced the release of The Evil Dead Groovy Collection which arrives on 4K Ultra HD, Blu-ray and digital this November. The box set includes the Sam Raimi-directed The Evil Dead and Evil Dead II, along with all three seasons of the comedy horror series Ash vs. Evil Dead. Who knew evil can be […] 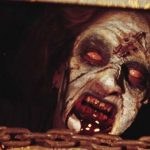 Marvelous Videos presents a guide to the Evil Dead franchise… Sam Raimi may be best associated with superhero pictures these days, but fans of him from the beginning will no doubt remember him best for another special trilogy- Evil Dead. That’s right, this series that slickly blended action, horror, and dark comedy into one was […] 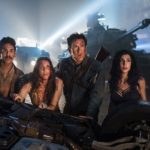 After three seasons of Ash vs. Evil Dead – which also saw Bruce Campbell reprise his role as Ashley “Ash” J. Williams – the series was unfortunately cancelled on Starz following a disappointing number of recorded viewers. However, in a recent discussion during Mainframe Comic Con 2.0 (via ComicBook), one of the stars of the show, Ray […] 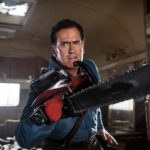 Following the cancellation of the TV series Ash vs. Evil Dead after three seasons, Bruce Campbell publicly announced he has retired the role of Ashley ‘Ash’ J. Williams. However, during a recent discussion at the Mainframe Comic Con 2.0 (via ComicBook), Ash vs. Evil Dead stars Dana DeLorenzo and Ray Santiago, who play Kelly Maxwell and Pablo Bolivar respectively, claimed […]

Ricky Church chats with Bruce Campbell at Fan Expo 2019… At the Fan Expo convention in Toronto, Flickering Myth got the chance to speak with famed and self-declared “B-List” actor Bruce Campbell. From appearing fighting against Hercules and Xena to combating the Evil Dead to writing his own autobiographies, Campbell is known for his wide […] 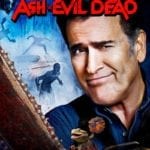 Lionsgate Home Entertainment has announced the release of Ash vs Evil Dead: The Complete Collection, which includes all three seasons of Starz’s acclaimed comedy horror series and is set to arrive on Digital, Blu-ray and DVD on October 16th; check out the cover artwork and special feature details here… SEE ALSO: Bruce Campbell to voice Ash […] 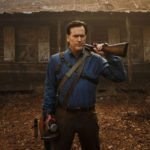 Last week it was announced that Starz has pulled the plug on Ash vs. Evil Dead, with the show set to come to an end with its upcoming season three finale. In the wake of the news, a fan campaign was launched urging Netflix or another service to come in and rescue the Evil Dead […]

Bad news for fans of Bruce Campbell’s chainsaw-wielding Deadite killer Ashley J. Williams, as Starz has announced that it has cancelled the TV series Ash vs. Evil Dead after three seasons. “Ash vs. Evil Dead has taken audiences on a wild ride for three seasons thanks to the fantastic performances and creative efforts of Sam, […]

Thanks to Starz, we’ve got an exclusive clip from this Sunday’s sixth episode of Ash vs. Evil Dead season three, ‘Tales from the Rift’, which sees Pablo receiving a message that El Jefe is in trouble; check it out here… https://www.youtube.com/watch?v=1h3E0gWsQ2g Ash’s bond with his daughter strengthens as more Knights of Sumeria join Pablo and […]

With Starz yet to make a decision on the future of Ash vs. Evil Dead, and cancellation looking like a very real possibility, actor Bruce Campbell has suggested that we may have seen the last of his cult hero Ashley J. Williams should the network opt against renewing the show for a fourth season. “If […]