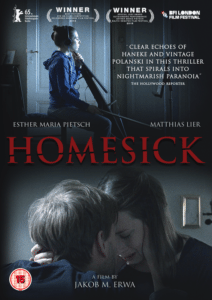 Ambitious cello student Jessica receives the invitation to an international contest. A great opportunity – but at the same time enormous pressure. Stress begins to gnaw on Jessica’s everyday life and soon reality and imagination blur.

It’s hard to watch a film like Homesick and not immediately think of previous isolationist psychological thrillers like Persona, Solaris, and Black Swan. All share the similar premise of a character being placed in an unfamiliar setting and experiencing hallucinatory visions courtesy of an undisclosed force. Is it supernatural, or it self-made due to loneliness and stress?

Our protagonist this time around is Jessica Klug, a professional cello player who moves into a new flat with her boyfriend Lorenz (Matthias Lier). A day within settling in, the two meet the apartment’s “unofficial manager” Hilde Domweber (Tatja Seibt), who seems kind on the outside but, over the course of the film, draws the suspicions of Jessica. Strange events plague Jessica over the course of a month, which only serves to intensify her growing obsession.

I can’t say I blame Jessica for having these doubts. Seibt does an irritatingly great job of giving Hilde a fake exterior; this is a woman who has some dark secret, but frustratingly won’t give any hint as to what it is. But at the same, it’s also clear that Jessica is on the edge of her seat over numerous events happening in her life: moving in together with her love, competing for an esteemed government-funded position with other musicians, and dealing with the condescending attitude of her father.

The problem is none of these situations are particularly well-developed. We only get one scene with Jessica’s father and the competition is treated as an excuse to keep Jessica constantly home. Compare this latter trait to the ballet in Black Swan where Tchaikovsky’s Swan Lake served as a visible device for Natalie Portman’s emotional transformation.

There is an attempt by the set designers and Erwa to make the unit an entity of its own through its whitewashed walls. In the beginning of the film, they are the subject of an aesthetic discussion. In fact, the color white is a recurring motif in the movie, taking over many aspects of Jessica’s life: her clothes, music sheets, flowers, building exterior, table, chair, bathtub, and so forth. White is often associated with ghosts and purity, but here it seems to be linked with cleanliness, as indicated by some of the dialogue. 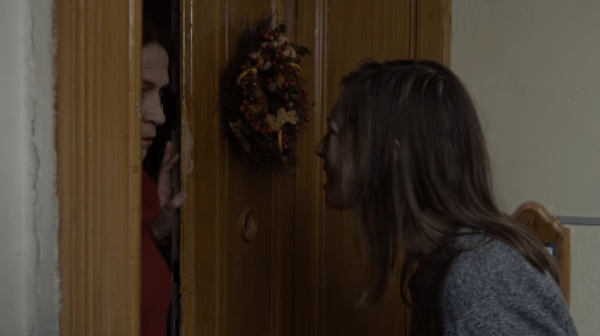 This attempt, however, falters courtesy of a strange decision by Erwa, and that is to mostly film the movie in stationary shots and hard cuts. Wes Anderson famously did this for the majority of Rushmore, but even then he didn’t maintain it for every single scene like Erwa seems to. The issue is we never get a sense of the oppressive environment that Jessica apparently inhabits, and having the audience stare at walls doesn’t do that task any favors.

So if neither of her motivations are delved into, you would think that Hilde would at least expanded upon. Sadly, I cannot say that was the case either. Erwa wants to walk a fine line between Jessica’s own delusions and Hilde’s mysteries, and that means keeping the latter’s mindset hidden from viewers. Her motivations, if she has any, are not even hinted at- at best I could gleam that she hates young people, but the existence of other young people in the flat doesn’t give this theory any credibility. She has an obsession with Jessica, evidenced by her constantly looking down at her through her upper window. Or perhaps that too is an illusion from Jessica’s mind.

I don’t like to be too harsh on independent movies, and I will give credit where credit due. This is a competently made movie. Indie films have taken advantage of the horror genre for some time now as it allows newbie filmmakers to focus on atmosphere without an extravagant budget, and Erwa succeeds at that even when he relies on cliches like sound crescendos to crank up sudden suspense.

The acting is also good for the most part. In particular, I really enjoyed Lier’s performance as Lorenz as he gives him a lot of subtle ticks in dealing with Jessica’s growing paranoia. On that note, Pietsch is wonderful when it comes to portraying Jessica’s increasing despair and frustration, but I wasn’t entirely convinced by her deranged intonations. When that bar has been set by actresses like Rebecca De Mornay (The Hand That Rocks the Cradle) and Kathy Bates (Misery), it must be met or risk negative comparisons.

Homesick is ultimately an enjoyable enough film. Don’t expect anything on the level of those three flicks I mentioned in the beginning, but do expect a well-crafted thriller.