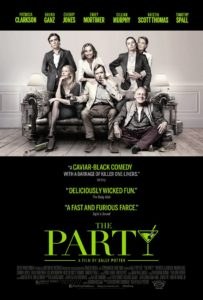 A celebratory gathering hosted by Janet (Kristen Scott Thomas) brings together a generation of friends, lovers, and family members, for a soirée that will escalate beyond family squabbles, to guns, duplicity, and revelations.

Sally Potter’s first film since 2012’s beautifully cold to the touch Ginger & Rosa is a film equally as harsh. Throwing together a shuffling spectre of a husband (Timothy Spall), a cynical best friend (Patricia Clarkson), her faith healing other half (Bruno Ganz), the newly pregnant Jinny and Martha (Cherry Jones and Emily Mortimer), and suave coke sniffing money man, Tom (Cillian Murphy), the barbed exchanges are at first coated in subtlety, before all pretense is dropped and the forked tongues fly.

Sounds like a delicious concoction for some witty repartee and boardwalk back-and-forth, doesn’t it? Sadly, despite a script peppered with the odd cutting retort, The Party ends up full of cold hollow chatter, that’s not always worth listening to.

There is plenty of intrigue from the off, with the tangled web of relationships hinting at plenty of unspoken conflict from the kind of people who greet one another with comments about their weight, or respond to pleasantries with “sounded like you mean it”, but they soon evolve into self centered pontificators, who speak as if addressing an audience. Some might read that as too theatrical, an environment where this would clearly flourish, others might feel it’s a tad smug, or a little too artificial for you to care about anything that’s going on.

If you can get comfortable with the heightened lunacy and increasing hysteria of the characters and their situation, then The Party does become a much more tolerable experience. 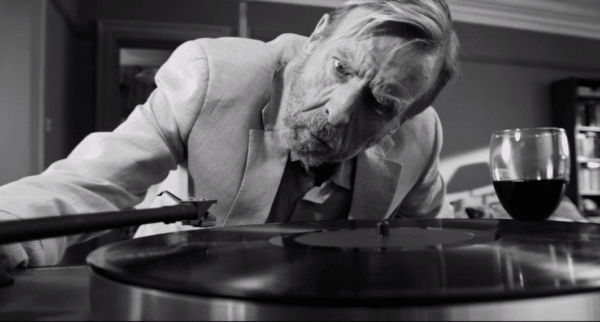 Playing host, Scott Thomas is as watchably regal as ever, the most likeable personality on offer as the maelstrom of sarcasm and nastiness fizzes about the room. Just as good are Jones (Signs, 24) and Clarkson (The Station Agent), who butt heads over every single line of eachother’s dialogue, sometimes to the point of exhaustion, but no doubt that’s the desired effect.

As for the plot upon which the wordplay is hung, The Party does have a few delightfully wicked twists in the final act, some of which steer it too close to all out farce, but by that time you’re welcoming the quick unraveling of this detestable bunch.

The Party doesn’t exactly live up to the promise of the invite, especially considering the calibre of people who RSVP’d, but at little over an hour, it doesn’t outstay its welcome, and is dark and scabrous enough to make it a nasty little diversion from the norm.