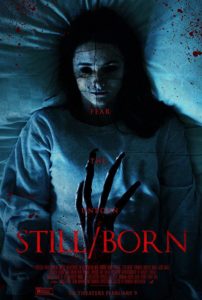 Mary, a new mother, gives birth to twins, but only one of them is alive. While taking care of her living child, Adam, she suspects that something, a supernatural entity, has chosen him and will stop at nothing to take him from her. 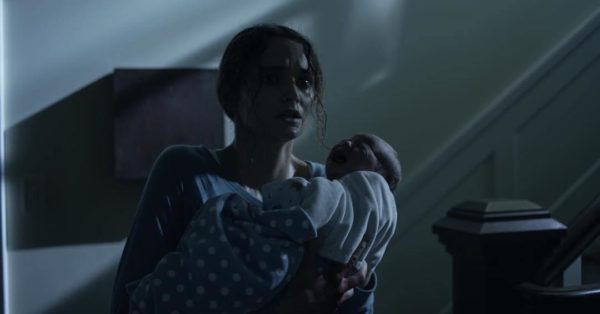 For every Lifetime special about the beautiful life-giving essence of childbirth, horror plucks equally ripe maternal offerings that delve into less-acknowledged ramifications. As a male, it’s an experience never to be personally understood – which is why my kind turns to filmmakers for scripted understanding (among other ways). A movie like Still/Born is – I’ll argue – vital representation for those who suffer from or wouldn’t think twice about post-pregnancy fears. The everlasting heartbreak of looking your dead son in the eyes, the paranoia of losing his brother, the worry of not upholding “acceptable” parenthood practices. Just as in life, where there is light a shadow is also cast – an exploration we may not choose to address but must uncover nonetheless.

Christie Burke stars as Mary, an expecting mother of twins who instead births a healthy Adam and stillborn Thomas. The grief is unbearable, but she and husband Jack (Jesse Moss) must focus on their healthy offspring instead of dwelling on depression. Unfortunately, Jack is much better at this. Mary tries to remain composed, but immediately starts hearing things like dual baby cries over her monitor and seeing visions of someone in Adam’s room. Could this be symptoms of a new, luxurious house Jack’s business partnership bought them? Postpartum Depression? The Mesopotamian demon Lamashtu trying to steal Mary’s child? Only time will tell as Mary must – wait, what?

On the whole, Still/Born is never better than a twenty-or-so minute stretch where Mary – left alone by Jack for work travel – unravels like a cheap wool sock. This period doesn’t sustain later acts that *surprisingly* allow Jack to return home for the film’s finale, but do grant a showing of talents by debut director Brandon Christensen. Mary might hear a baby’s cry even though Adam lays sleeping in her sight or imagine the soft whimpering of an old hag’s voice from behind a locked door – but goddamn. With the lights off, attention focused, scenes produce a haunting blend of ghostly attributes and a mother’s greatest fears with devilish regard.

You’d be right to assume very Rosemary’s Baby/Shelly/Mama vibes – unsettling visions, all horrifically at the cost of newborn innocence. Without guidance or immediate support, these influences crack Mary’s psyche like a dropped porcelain doll. Rushed sprints down an echoey hallway are expected – but then Jack reenters focus. Installs cameras. Something is *most certainly* wrong, yet her mother’s offer to lend aid is declined and Jack leaves her alone on multiple occasions. Red flags are as much about individuals recognizing someone in pain as they are a spiritual attack, only ignorance plays too large a part in formulating genre setups.

This is not to discredit Christie Burke, who evokes a very Lauren Ashley Carter genre mold with those wide-eyed admissions of fear. She’s never well, but fakes compromise and sanity with a masquerading expertise. Jesse Moss’ father and neighbor Rachel, played by Rebecca Olsen, are harder sells because they’re merely along for the ride – but Burke does justice to broken mothers who aren’t permitted time to process internal devastation. Enough psychosis blurs the line between reality and satanic offering to where evil remains in question, even if notes are pushed a step far (Burke yelling “SHUT THE FUCK UP” at a child while dress in her Stepford best).

Darkness is Mr. Christensen’s best friend when constructing scares in the deepest reaches of night, around three in the morning of course (canon witching hour). Windows burst open, doors slam shut – even the shorting of power spikes anxiety because we know a child’s life is at stake. Lamashtu is not to be messed with when popping from vents or looming over a fleshy treat, even with Mary acting on mama bear instincts. In isolation, where we question the presence of a demon who snatches children from tormented mothers, Still/Born rattles off some serious atmospheric dread that I wish could be enjoyed throughout the film’s entire running time. An ending party sequence blasts some saturated neons and parkside smoking sequences let a little light in, but nothing beats the virulent clutches of night – for better and worse.

Still/Born may not cleverly shake themes about like Prevenge – morphing motherhood fears into something unexpected – but that doesn’t weaken messages. Coincidental head-turning and momentary lapses in story logic take care of that, only not to the point where sequences are completely jettisoned. Color me impressed by Brandon Christensen’s teaming with Colin Minihan and their Postpartum “Psychosis” script touched with meditative exploitation. Don’t expect to be surprised by the plot’s structure, just execution. Doubly so for any soon-to-be mommy or new family who wants to test their wits.