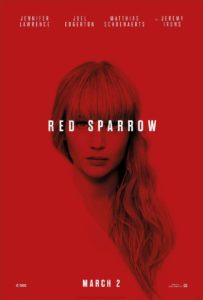 Ballerina Dominika Egorova is recruited to ‘Sparrow School,’ a Russian intelligence service where she is forced to use her body as a weapon. But her first mission, targeting a CIA agent, threatens to unravel the security of both nations. 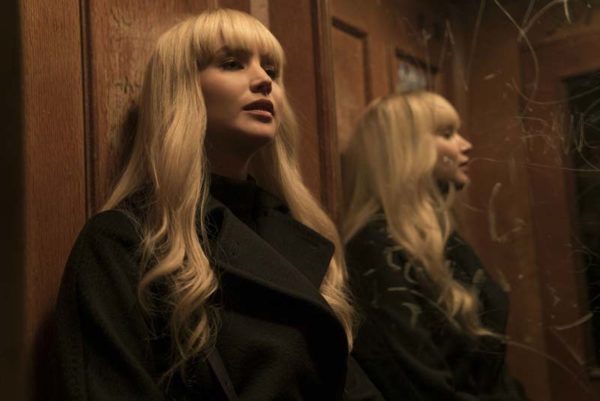 Francis Lawrence’s Red Sparrow is being marketed as some KGB Kingsman flick with Atomic Blonde undertones – or, even better, a snipe on Marvel’s Black Widow plans – but this Jason Matthews adaptation is none of the above (quite assertively). Maybe something between Hitchcock and Verhoeven, but never as deceptive or shocking. Expect sparse action inserts, glum psychological abuse and vastly more beatings for Jennifer Lawrence than mother! exploited. There’s something about gender manipulation to be said here, it’s just frozen under thick Soviet snowfalls and predictability that’s further disserviced by a – holy melatonin – 139 minute runtime?!

Ms. Lawrence plays Russian ballerina royalty, Dominika Egorova. During a grand solo routine in front of sellout numbers, her leg – and career – is shattered by a “clumsy” partner who we come to learn injured with intent. Nevertheless, Egorova is out of the dance company and her mother needs medication money – enter Uncle Vanya (Matthias Schoenaerts). His promise of situational aid ends up leading to Dominika’s blackmailed introduction into Russia’s “Red Sparrow” program. She’ll be trained in the arts of espionage, mental warfare and physical defense with combat-ready intent because the glory of Russia is always to be protected from American agents like Nate Nash (Joel Edgerton) – her first assignment.

This is where you expect me to detail Dominika’s rigorous battle preparation, correct? Sparrow students are tested – by Charlotte Rampling’s “Matron” headmistress – but only in the arts of sexual…well…gratification subterfuge (we’ll call it). One deskmate breaks down after coming within centimeters of giving a forced blowjob (in class), Dominika fights off a trainee rapist mid-shower, Dominika then strips nude and goads her attacker (in class) – I’m sure this is meant to suggest sex as a weapon, but intent is haphazard and without counterbalance. A bit tasteless and excessive considering how Vanya trades Dominika’s body for a mark on her first assignment – pre-Sparrow enrollment – which positions Red Sparrow as some militant rape-revenge thriller from (red) square one. 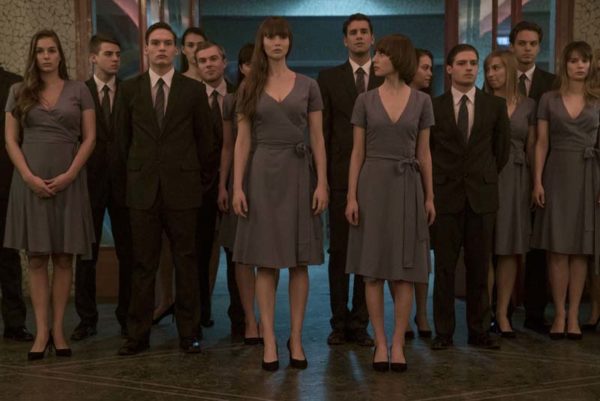 There’s a “Red Swallows” quip in here somewhere, if only to distract from misplaced normalization of bodily abuse and lingering uneasiness.

Once we endure enough of Dominika’s initial academy numbness and emotional lobotomizing, she’s immediately sent into the field despite voiced disapproval. Dominika is clearly not like the others (who strip full-frontal nude on request), as she opts for handjobs to remain in control (much to Matron’s dismay). No bother – Dominika’s sent to win Nate Nash’s trust so he’ll divulge the name of a top-ranking government mole feeding Russian information to hungry ears. Egorova makes contact, is immediately made by Nate and complications arise – of course, who is truly manipulating who?

It’s spy against spy in a battle of charisma and deception, but Egorova is easily wooed by her Statesman target’s generic charms. From Russia, full of love? Over two hours of fake-out after fake-out, be it Stephanie Boucher’s (Mary-Louise Parker) disc-selling US traitor to Korchnoi’s (Jeremy Irons) constant doubting of Dominika’s allegiance. Nothing about fleet-footed performance talents from Dominika’s past that lead to swifty-choreographed soldier brawling. No real question as to which side Dominika leans towards. Red Sparrow is a bland vodka-and-potatoes kind of secret agent mistifier, drawn out to an indomitable length that’d tire, I don’t know, who’s the fastest Russian marathon runner ([insert “Dmitrii Fastimov” joke here])?

There’s no doubt that J-Law saw this wounded lioness, Dominika Egorova, as a lucrative performance challenge. Scene after scene she’s stripped uncomfortably bare – of clothes or will – asked to abandon pride for motherland subordination, yet fights back in refusal. She shows how strong, fierce woman handle themselves without getting down on both knees (contextual comparison) – despite director Francis Lawrence’s or writer Justin Haythe’s garbled translation. Lawrence’s Dominika is used, abused and flaunted nude on camera when hope is most extinguished, enduring headbanger showers or bashing attackers with metal knobs. Dominika grows cold to the world – how else should one deal with a family member’s self-fulfilling agenda – giving Lawrence little to work with outside of knife-cut reactions and stone-cold persuasion tactics (see also: emotionless). 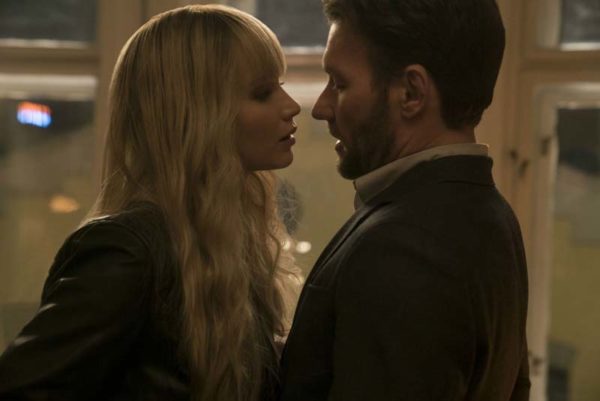 Moments in which tensions spike are few and far between, but one does involve a skin graft cutter…so there’s that? In fact, said slicing *might* be the film’s only true action stance – don’t ask, sequences are forgotten almost instantaneously – in an attempt to cut through repetitive punishment flavors. European commentary, perhaps? Being used by country (not quite A Serbian Film, mind you)? Edgerton does play a devout US pretty-boy who promises protection to contrast Schoenaerts’ despicable treatment of Lawrence, but in the most indiscernible side-character kind of way. Even Ms. Lawrence has trouble defining character – yet the spotlight remains on her and only her.

Red Sparrow is a frozen ice sculpture we watch melt over time; slow to pay off and without any surprise outcome (we’re glazed over by the time a third-act shocker begs redemption). Jennifer Lawrence plays a woman who is worn, broken down, built up and always three steps ahead – it just never amounts to much development. Scenes of gratuitous womanizing and sexual conquest continue to stumble into focus while modernized Cold War paranoia makes for an unnecessarily drawn-out mission log. Shades of Tinker Tailor Soldier Spy, except without the collar-chewing tension or endearing sense of duplicitous side-playing. Oddly off-putting and left out to dry at least 40 minutes too long – so many ill-fitting choices with plenty of time to realize each one in full.