“I think the only way we can stop ourselves from becoming like them is to understand the darkness within us and fight it.”

It’s worth a word on the title, I think.

What it refers to, largely, is obvious. The first part, “The Battle Without”, is easily understood; alluding to the past nine months, it signifies the Klingon war – the battle – without the USS Discovery to turn the tide. The Federation is no longer on the brink of war, but they’ve essentially lost it; arguably, this universe is now just as driven by strife and conflict as the Mirror Universe we just left.

More abstractly, though, it denotes a lack – what are they “without”? In turn, then, it’s worth looking at this episode to see what’s absent.

What’s missing is Captain Lorca. Our attention is drawn to this at the beginning, with Sarek’s dramatic reminder of his death; it’s worth interrogating just why this line was delivered as it was, given it’s not a revelation for the Discovery crew or the audience. In essence, it’s a statement of intent, an indicator that this episode takes place in the shadow of Captain Lorca. Despite this, it’s oddly easy to forget, in fact, what’s missing; the crew gel so well in his absence, but then that’s also part of the point. There’s an emphasis on the Federation values, at least amongst the crew and on the ship; the scene shared between Tyler and the rest of the crew is telling in this regard, as is the terraforming to create new spores.

That is, at least, until Captain Lorca returns. Or a version of him, anyway: there’s an obvious parallel between installing mirror-Georgiou as the new Captain, and the ship under Lorca.

And that, perhaps, is what has really been lacked – any material progress for our crew. They’ve returned home at great difficulty, but their home is now almost unrecognisable, consumed by a similar darkness from whence they came. They deposed a Captain who manipulated them, an imposter who was never really the mentor figure they looked up to – and now they’re serving under another warmonger from another universe, their efforts and their ideals about to be subverted. 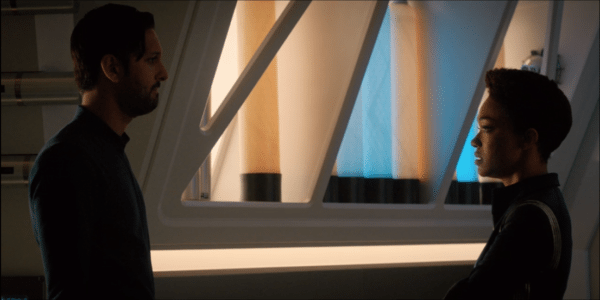 Similarly, “the Battle Within” seems to, most immediately, refer to Tyler. The internal turmoil between his human and Klingon identities has been an ongoing thread throughout the series; after the climactic reveal, we’re now getting into the emotional repercussions of such. There’s a genuine poignancy to Tyler’s various reunions with the crew – with Saru, Stamets, Tilly and Burnham – that places this episode amongst Discovery’s best efforts so far.

Shazad Latif, of course, is central to this – it wouldn’t work without him. There’s a palpable regret and vulnerability here, and it’s a very open performance; in contrast to the previous, very controlled version of Tyler we’ve seen so far, here the character is laid bare. Latif plays off the rest of the cast really well, and there’s a genuine sense of what it means for Tyler here – another loss of identity, after the Klingons took so much from him already. There’s a real pathos to this episode, in no small part because of Latif’s performance.

It’s interesting to contrast, incidentally, Tyler and the rest of the Klingons. Obviously, they’ve always been linked; Voq was their new messiah and one-time leader, and Tyler once their captive. On a more symbolic level, though, you can look at the dichotomy between Voq and Tyler as a microcosm of the (perceived?) relationship between the Klingons and the Federation – what happens with Tyler and Voq is, in a way, what the Klingons fear for their Empire. So, it’s perhaps interesting to note that, at a point when Tyler is in command of the body personal, the Klingons are in disarray; they have a certain dominance over the body politic, yes, but they’re in a similar internal conflict to what we’ve previously seen of Tyler.

You could take it as foreshadowing, perhaps, signifying the eventual resolution. Or, perhaps, read it as establishing something of an inverse relationship – that for the Federation to regain control, it’ll be necessary for Ash to lose it again, in a moment of sacrifice for a larger cause (in itself, a mirror of what Voq did for the Klingons). 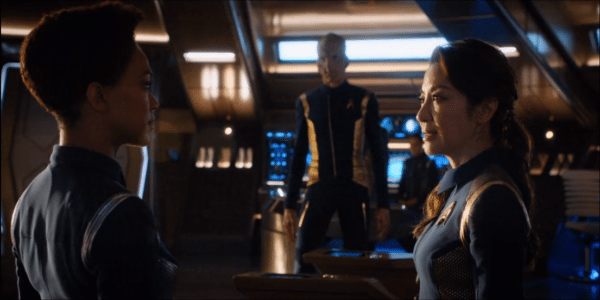 The idea of “The Battle Without, and the Battle Within” can also be read as a portent of what’s to come, of course, and an emphatic restatement of the themes that are central to Star Trek: Discovery.

It’s clear that the intent of Admiral Cornwell, and what’s left of the Federation leadership, is to collaborate with mirror-Georgiou to perpetrate a genocide. There’s an overt parallel to mirror-Lorca, of course; the deception and the subterfuge, the manipulation to achieve a darker aim. At the same time, though, there’s shades of the beginning of the series, and we’re now seeing how Burnham has come full circle. No doubt Burnham will have to lead a mutiny against Georgiou; this time, to prevent a disproportionate attack rather than to stage one.

As discussed last week, it’s the chief theme of Star Trek: Discovery – how do you hold onto your ideals when the situation around you is entirely compromised? It seems, for now, that the intent is to proclaim revolution against a status quo that can’t be upheld; to boldly and unflinchingly hold to those values and ideals. It’ll be interesting to see just how the specifics of this work out – certainly, it looks like Saru is going to be on the other side of the insurrection this time, an interesting evolution for the character. Across the course of the series, Discovery has had some dramatic ups and downs; now, at least, it seems poised for a particularly compelling finale.

One thing that you can say about Discovery is that it has been consistently more entertaining than it has been thoughtful. It’s a very qualified compliment to level at the show, but one that should come with a caveat: in the moments when Discovery is thoughtful, it really does excel.