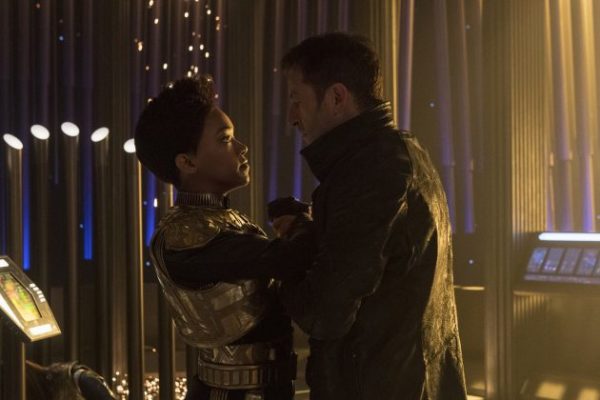 “Your lack of vision continues to disappoint me.”

In the AV Club’s review of this week’s Star Trek: Discovery, there’s some discussion about what exactly the show is actually about. Certainly, the show doesn’t quite have the same clear premise as its predecessors; there’s no mission of exploration, no frontier, no voyage home, this isn’t the beginning. Indeed, I don’t think they’ve actually really discovered anything, to be honest. There’s an argument to be made that Discovery was assembled by piecemeal – taking different aspects of previous Trek instalments that worked, a war and the Mirror universe and so on, and then just sort of putting them all together.

Let’s submit, instead, another interpretation.

Star Trek: Discovery is about revolution. Or, at least, it should be.

From it’s first episode, that’s what made this series distinct. Michael Burnham was the Federation’s first mutineer – the only officer in the history of the fleet who disobeyed the orders of their captain and staged a takeover. It didn’t work, plunging the galaxy into war – but, nonetheless, that’s the chief characteristic of Burnham as we were introduced to her. Someone who had such a strength in their convictions, such forward momentum, that she would go above and beyond the status quo.

I don’t know that it’s been entirely effective in advancing that theme, certainly; you can argue that the mycelial network, a revolutionary technology, is in broadly the same vein, but that’s a bit of a stretch. The Klingons, insofar as we contend with them, have been undergoing something of a cultural revolution – the idea is there, lurking underneath the surface, requiring just that little bit more attention to really, properly work. A Star Trek with a revolutionary spirit is, perhaps, exactly what the franchise needs to define itself with in 2018.

‘What’s Past is Prologue’ returns to this idea, though; Lorca was a revolutionary of sorts, in the mirror universe. His angle, the whole time, has been to return here – keeping the truth of his identity secret, but always intending to go home and finish his coup. In one sense, the series had always been heading there; that Burnham would have to stage another mutiny, to rebel against another captain, but this time for the right reasons. And that, in the end, has been predicated on the idea that Lorca was evil the whole time – perhaps not the compelling moral struggle you’d have hoped for, but hey. 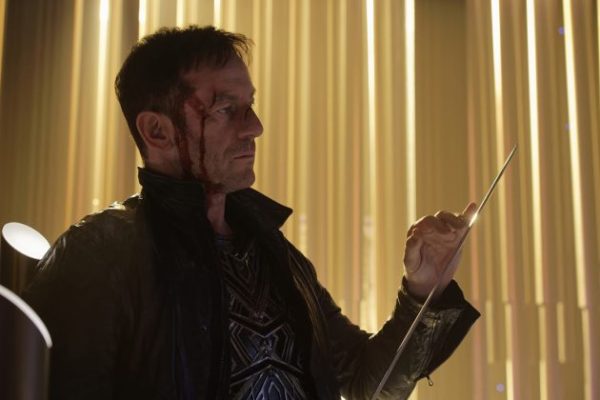 It’s difficult to say that the twist about Lorca’s identity works.

Up to a point, that’s just a personal thing; I have long since gotten bored of identity reveals that rely on the idea that everything we know about a character has been a pretence. There’s a lack of nuance to it, and ultimately there’s a lack of nuance to the ‘real’ Lorca. He is, in the end, little more than a power-grabbing usurper with delusions of a destiny and a sexual obsession with Michael Burnham. It’s not so much that this casts a new light on everything we’ve seen already – it’s that everything we’ve seen already was entirely false.

Sure, there was interesting stuff that could have been done with this idea – but, at the same time, I’m starting to grow a little tired of that caveat. After a point, there’s little to be gained by focusing on what could have been done with the idea, when time after time Discovery makes the least interesting choice. Taking such a simplistic approach with this reveal diminishes Lorca’s character, and all the nuance and subtlety we’ve seen so far; it’s a waste of Jason Isaacs, to be frank, who gives a great performance but in the end is still limited by the constraints of the script. If all he’s given to do is sneering, snarling villain, the character can’t rise above that – and it’s a shame that such an interesting character as Lorca was reduced to this.

Of course, it does raise the question: what makes Lorca different from Georgiou, in the end? From an audience perspective, I’m a little unconvinced by Discovery’s argument that Emperor Georgiou’s the one I should care about. She’s pointedly not the character that we met at the start of the series – we saw her massacre the retreating rebels, we saw her eating a Kelpian, and we know that, as head of a brutal Empire, that’s only the tip of the iceberg. Lorca, meanwhile, is the character we’ve spent the series with, the one we’ve grown to appreciate and feel attached to; yes, he lied, and yes, he manipulated the crew, but beyond that? I don’t see why Burnham, or indeed the rest of the crew, wouldn’t still feel a degree of loyalty and attachment to their captain – ‘What’s Past is Prologue’ moves at such a pace that there’s little time for another more than the most muted of reactions from the crew, and the emotional beats suffer. It’s a weak twist, one that doesn’t quite land. 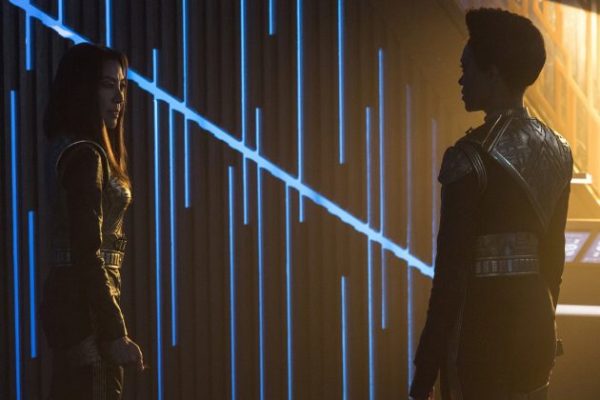 But let’s get back to that – to what Discovery is actually about. You can read revolution as a thread, sure, but equally, it does need a degree of forensic analysis that the series doesn’t quite stand up to on its own.

So, let’s pose another question. What Discovery wants to be about, what it tries to be about, is this: how do you hold onto your ideals when the situation around you is entirely compromised?

That, perhaps, makes a great deal more sense. Michael follows her ideals but fails – and then the whole Federation is plunged into a war it isn’t ready for, a war that challenges the ethos at its core and the principles it was founded on. The spore drive technology is repurposed as a weapon; a scientific vessel becomes a warship. A captain who seems to be an explorer, but is forced to be a warrior (or, rather, a warrior who’s forced to pretend to be an explorer forced to be a warrior). The Klingons, trying to hold onto their culture in a changing society.

As it stands, the rest of Discovery is perhaps easy to predict – at least in broad terms, anyway. It’s difficult to believe they’re going to entirely dissemble the Federation, given the need to maintain a certain fidelity with the original series; presumably we’re set for some sort of timey-wimey reset, after a couple of episodes with a Federation resistance (again, holding onto ideals in the face of Klingon rule). It’s perhaps the least interesting version of the question of “how do you hold onto your ideals when the situation around you is entirely compromised?” they could have posed, under the circumstances.

I suspect, to be honest, that I’m starting to run out of things to say about Star Trek: Discovery. It’s a show that’s easy to watch, with solid performances and exciting direction, but at times difficult to meaningfully engage with, given the frequent lapses in the writing. Time and time again, it’s easy to point to something interesting the show could have done as it proceeds to quite blithely take a less interesting approach.

That, I guess, is why it can be difficult to say what the show is about. I don’t entirely think it knows itself yet.