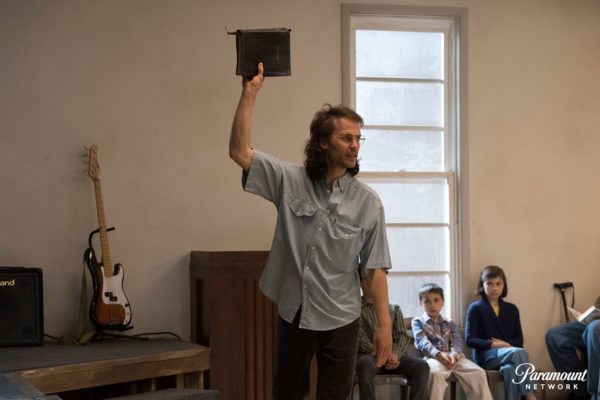 “Operation Showtime” (taking its name from the real-life ATF raid) opens up with a scene we saw in the pilot: Koresh walking outside to plead with the surrounding ATF agents. At the time, we didn’t know when that was happening. Now that we do, there’s a retrospective sadness added as you come to the realization that Koresh’s pleas are going to fall on deaf ears.

The reason for the raid turning into a full out battle is attributed to ATF agents hearing their own men murdering Koresh’s dogs, and misattributing that gunfire to the Branch Davidians. I suspect the Dowdle Brothers may take some criticism for choosing to outright blame the government organization for the consequent siege, but a little research from objective sources reveals that the ATF is largely blamed for firing first by journalists and historians.

Regardless, the ensuing shootout is intense, terrifying, and heartbreaking. The press screening I was given access to was full of unfinished SFX, but I still got a sense of the ferocity of the collateral damage thanks to solid filmmaking and magnetic performances from the cast.

After an hour or so of engaging, a ceasefire is issued due to collaboration between the local sheriff’s office and a cameraman, who had been filming since things began. His recording of the event ends up mysteriously disappearing, preventing Koresh and his cult from having any evidence vindicating them of starting the gun battle. Unfortunately, it was this cameraman’s part that I found to not only feel quite contrived in the scheme of things, but also nonexistent. While the media was no doubt reporting on the event, my own research into the Waco Siege found no evidence that there was a reporter who had a role in ending the skirmish, nor had video proof of whoever fired first. I could be wrong though, and the filmmakers do deserve credit for creating an atmosphere where it’s believable that the law enforcement would have had a role in getting rid of such a tape.

The rest of the episode is devoted to the aftermath of this action. Cinematographer Todd McMullen, costume designer Karyn Wagner, and many individuals responsible for the makeup, visual effects, and set design deserve a lot of credit for giving the Koresh Compound and its survivors a hellish outlook. There’s plenty of haunting images, from Judy caressing her bloodstained baby to Rachel and Michelle’s father lying catatonic in a bed. Lacking professional medical help, the footage really makes you wonder how these people will manage to last 51 days.

However, it isn’t just imagery that fills the emotional space, but insightful conversations. As Koresh tries to comfort everyone while coming to terms with the fact that this is the opening of the Fifth Seal, he finds himself entering negotiations with Noesner. I’m curious as to whether or not the two actors actually interacted during filming, but even if they didn’t their talks felt genuine and were some of my favorite parts of this episode.

There is also the bureaucratic side to the affair. After all, the ATF getting into another civilian gunfight after the controversy at Ruby Ridge is not good politics. I always find this part of the Waco series to be fascinating as it gives some needed awareness into what happens behind-the-scenes. There is a lot of blaming going around, but little solutions to be found.

Overall, “Operation Showtime” was another strong outing in Paramount Network’s Waco. With so many characters to deal with there are some pacing problems to be sure, and the whole mini subplot with the cameraman felt disingenuous to the real-life story. But if “The Strangers Across the Street” was the calm before the storm, “Operation Showtime” brought the thunder.

Notes:
-I meant to say this last episode, but I feel it was a mistake of the creators to cast a Paul Sparks-lookalike as the ATF Chief.
-Props to the actor who played the FBI head named Tony Prince. He unfortunately lacks credit on IMDb, so I cannot say who he was, but what a great performance!
-The celebration scene following the shooting felt out of place. Did the Branch Davidians really start having a cheerful dinner following the loss of some of their members?