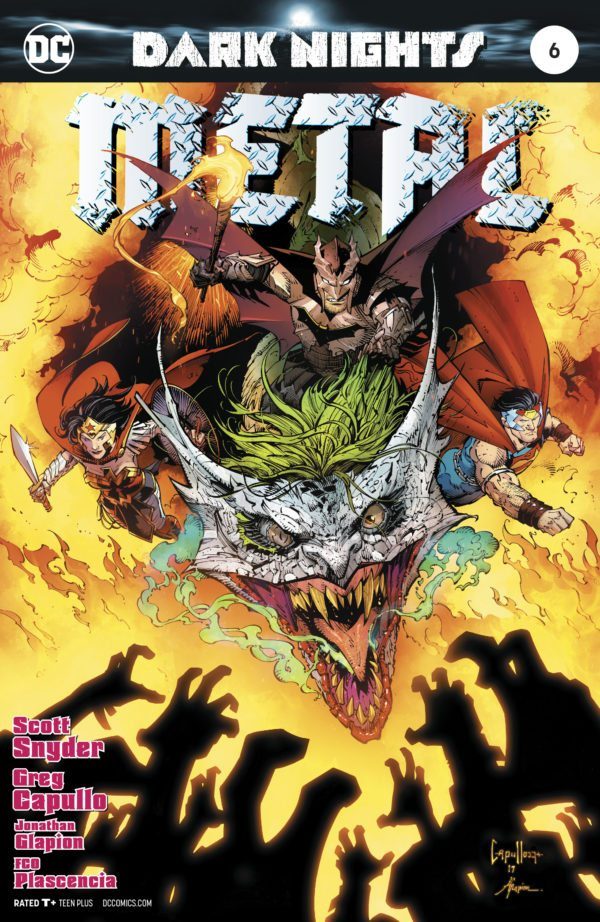 Anyone who has been reading Dark Nights: Metal will know how increasingly crazy or ‘out there’ the event series has gotten over its run. Scott Snyder has taken a lot of cues from Grant Morrison in crafting such a meta-commentary heavy event ladled with examining the nature of stories and happy endings. For the finale of Dark Nights: Metal Snyder goes full-blown Morrison as he delivers an epic, but weighty, spectacle as the heroes of DC make one last attempt to save Earth from sinking into the Dark Multiverse.

Snyder packs the issue to the brim with characters. Almost every character who has appeared in Metal and its various tie-ins is seen here as they join forces to stop the Dark Knights. It can sometimes feel like its overstuffed with characters, but Snyder does a fairly good job of balancing the main players. The one area that is a little disappointing is in the Dark Knights themselves; aside from the Batman Who Laughs, none of the other Knights have really had any prominence in the main story itself, leaving their roles to be explored in the tie-ins. They’re not given much to do in the finale either which is a bit of a shame given how The Wild Hunt hinted that some of them might turn against Batman Who Laughs. Fans of Sandman‘s Dream might also be a bit disappointed that his stunning appearance early on in the series never played much more of a role in all of Metal.

Nevertheless, Snyder does some pretty great character work with the Justice League. Wonder Woman has some great moments, but fans of Hawkgirl and Hawkman will be very happy, particularly with the former. Metal #6 is a great return for Hawkgirl and Snyder writes her very well, showing her as a capable warrior with a lot of compassion for Carter Hal. Her pairing with Wonder Woman is once again one of the best aspects of the issue. It’s exciting to think of what Snyder will do with these two once his Justice League series starts.

Of course, though, the real star of the show is Batman. There are plenty of great Batman moments within the issue, not the least of which is a surprise team-up with an unexpected ally against Batman Who Laughs. It acts as a bit of a deus ex machina since this character hadn’t appeared in the series proper, but its still a great scene that highlights how unexpected Batman himself can be. It also pays off on some of Snyder and Capullo’s past Batman stories in a very cool way.

Greg Capullo is at the top of his game in the finale, using every space he has to include all these characters yet making them do individual actions in the panels. Its a lot of work, but he does well with the huge cast, giving enough characters equal balance and delivering some stunning imagery. Whether its Hawkman vs Barbatos, the fight between Batman and Batman Who Laughs or just about any other image of Batman, Capullo fills Metal #6 with very evocative and satisfying images. The extra-size of the issue is used well for Capullo to play around with his vision. Another point is how he uses the character’s body language and facial expressions to great effect throughout the issue.

Metal #6, however, includes a fairly lengthy epilogue that is not drawn by Capullo, but instead Mikel Janin, Alvaro Martinez and Raul Fernandez. Their styles are very different from Capullo’s and even with each other’s they don’t mesh too well together. Janin in particular doesn’t really have the same type of style he does in the current Batman series, employing several panels of talking heads rather than the creative layouts he’s known for. This also spends much more time setting up future stories in the DC universe, more than just Snyder’s No Justice miniseries and his Justice League. There also doesn’t seem to be much fallout from Metal as everything, including the League’s standing with Batman, is somewhat reverted back to status quo. Its still great to see the League together in civilian clothes and taking a much needed breather from doom, but the art unfortunately doesn’t match Capullo’s style.

Despite those flaws, Dark Nights: Metal #6 is still an epic conclusion to this series that goes unapologetically crazy as Snyder and Capullo deliver several great moments. The concepts Snyder has explored in Metal mostly pay off in the finale, giving some provoking thoughts to the nature of stories and endings. The finale could have been a little less jammed and it would have also been nice to get a bit more of a pay off with those characters, but Snyder and Capullo still succeeded in giving fans an out there, balls-to-wall crazy adventure.