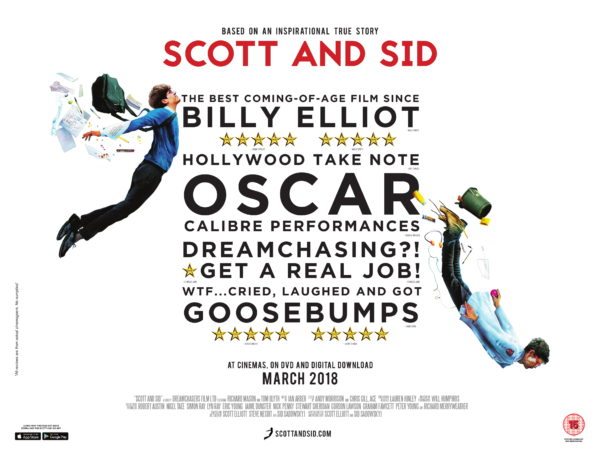 Scott and Sid is the debut feature from Scott Elliott and Sid Sadowskyj, loosely based on on their real life experiences.

When Scott (Richard Mason) transfers schools, he befriends the withdrawn and awkward Sid (Tom Blyth), whose only aspirations are to work hard, get through his exams and escape into his own life. Whilst his home life is blighted by an alcoholic mother and absent father, Scott is an unloved foster child. The meeting of the two boys sees an adventure take shape, together purring one another on to chase their dreams in spite of the low expectations from teachers and parents, who try to stifle their aspirational spirits.

Ahead of the theatrical release, Elliott and Sadowskyj spoke with Flickering Myth about the experiences of their feature debut, and offering audiences an alternative take of a story about overcoming fears.

How did the expectations of your feature debut compare to the reality of the experience?

Elliott: It was a seven week shoot and we were six months in pre-production with a year in post, and it was better than I thought it would be. I had an absolutely amazing time. We were learning on the job and we met some absolutely fantastic people. So the experience out performed the expectations – it was like Christmas morning everyday for two years.

Sadowskyj: I’d echo that. There were certain elements we were really naive about, but what we ultimately did was to recruit where we had a lack of experience – not so much the business, but what we needed to bring to the table. I think those people brought a lot and made it much easier for us.

The auteur theory contradicts the collaborative nature of the filmmaking process. Do you perceive the director as the author, or is every individual a contributing author?

Elliott: For marketing purposes there is the push of the director, but I would say no, the cinematographer, the production designer, the producer, the composer and even the first assistant director…if you don’t get a first AD you don’t have a film.

Sadowskyj: It is a huge collaboration and there are elements where the director is definitely giving the direction, almost like they’re the flagpole of that’s where we need to be. But then the actual process of making that happen involves an army of people, and if that army is demotivated or not up for the game, or doesn’t have the same passion as the director or those at the top, then you end up coming up with a much poorer end product.

The film opens with the C.S Lewis quote: “We are what we believe we are.” There are only a limited number of archetypal stories, but do these words tap into the heart this film, that need for a inner self-belief and conviction in adding to the dream chaser canon?

Elliott: As you say there are only a certain amount of stories, but we need to tell stories differently to different generations. I sat down a few weeks ago with my little brother to watch Zulu, and he wouldn’t watch it. The way it was edited it was too long and too boring for him. So I think we need to change stories and regurgitate or re-morph them so they speak to each generation differently. Maybe twenty years ago Scott and Sid would not have worked at all, and in another twenty years people would say: “I don’t get it.” But now it has a rawness and it speaks to people with what’s going on out there.

Sadowskyj: It’s an alternative I guess to your Superman’s, Batman’s or Marvel comics, where you have the main hero who’s going through a lot of problems, and has to overcome his self-doubts or insecurities. Our film is as you say a repackaged version presented in a more relatable time because obviously we don’t have superpowers. We are just two normal lads who didn’t do anything that was massively crazy. But I think people can relate to this kind of journey and understand what the heart of the film is about, which is ultimately overcoming your fears and self-doubts to become dream chasers. And to not worry about other people and allow influence from external mediums to impact your path.

Picking up on your point about films belonging to a specific time, a film can serve the purpose of forming a social and cultural tapestry of the feelings and aesthetic of a time period?

Sadowskyj: Its definitely something I would say from a timeline point of view taps into the consciousness of the UK or the world. When we started off on this journey writing the film, it was never our ambition to make the film about Scott and Sid. It was not until we were on this crazy journey with the businesses and travelled to New Zealand that we ended up telling people our story. They were just so inspired and I think it was just this lightbulb moment that we had to let people know about what we’ve achieved at twenty four, which for me and Scott didn’t seem to be that incredible.

Elliott: The biggest achievement was our openness of communication and emotion to show that it’s hard. I do think a lot of guys try to dampen their emotions and not really show it off. What we wanted to do in this was to say: “Look, its okay to show that rawness.” When we spoke to people it wasn’t necessarily about what we’d made, but it was how we did it that they found quite fascinating. It was hard work and we cried, we fought with each other and knowing it was going to be horrible, we had to get up and go back through it the next day. And that was the inspiring bit that would push people on and that’s what we wanted to get in the film, that it is literally hard work. You have to be open and very raw with each other to get where you want to be, and you have to be very truthful to yourself.

Interviewing filmmaker Christoph Behl he remarked to me: “You are evolving, and after the film, you are not the same person as you were before.” Do you perceive there to be a transformative aspect to the creative process?

Elliott: Definitely, and I had insomnia throughout and massive issues personally because I had to open up every single day, especially in the shooting and principal photography stage. I found being that open at the end of it definitely made me feel more at peace with myself, and a much calmer person. By the time we finished the product, I just felt I didn’t have to prove it to myself anymore. I just want to do this and have fun with it, and I wouldn’t say it was a rebirth, rather I felt a weight off my shoulder and a sense of pride I had never felt before.

Sadowskyj: I would say that from writing to actually bringing it to market, reflecting on our friendship and what we’ve achieved during this short period of time has been a very therapeutic process. But more interesting than that is how proud I am of what we’ve achieved because this is the biggest point for me. From writing the script to actually raising the money, making the film to doing post production, to then rejecting the deals we had on the table to distribute it, and to then have the balls to go out and distribute it ourselves, we have constantly been dream chasing. So there this is this enormous pride and the scene in Shawshank Redemption where they sit there with a beer in the sun and are proud of what they’ve done, that’s the sort of feeling I have now.

Elliott: Over the four or five years of doing this movie had a massive impact on our friendship as well. Our friendship has changed drastically and at points it fell apart. Today it is at a different level because when you have created something together like this, then you can see a fantastic bond has developed by going through the process.

Sadowskyj: It’s like an adventure and at the time you think it was in the trenches, but then when you actually reflect, it’s those moments that you actually love the most because they were the hardest times, and you came through them.

Scott and Sid is in UK cinemas 9th March and released on DVD and Digital Download 12th March.

Many thanks to Scott Elliott and Sid Sadowskyj for taking the time for this interview.