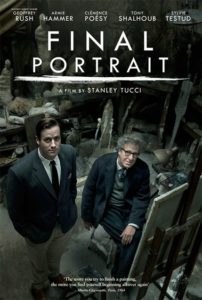 The story of Swiss painter and sculptor Alberto Giacometti. The creative process for artists is a nightmare. This sentiment has been explored time and time again, but rarely so intimate to a singular piece. The titular final portrait here is one by famed Swiss sculptor and painter Alberto Giacometti (played with a cantankerous attitude and tortured soul swagger by veteran actor Geoffrey Rush) of his newfound friend American writer and art critic James Lord (Armie Hammer pulling off the same style of sophisticated presence as recently seen by him in the Oscar-nominated Call Me by Your Name, and whose real-life portrayal quite frankly deserved a medal in addition to a painting of himself for patiently dealing with the indecisive madman antics of Alberto). It was only supposed to take a few hours, but just as this review should probably only take me one hour, I will either get distracted by social media and slowly pick away at it, or finish within a reasonable timeframe but then read it out loud 400 times changing sentences around until everything sounds perfectly right. Alberto considered even his finished works to be incomplete, which scarily resembles the mindset of most artistic individuals and anything they create.

Even so, it takes a lot of fuss and dedication to reach the crankiness of Alberto; as he grunts “Oh fuck” at the work in progress that looks great to normal eyes, one almost wants to cry or at least lift up the overpriced concessions soda out of its cupholder and toast James for his graceful understanding, especially considering the situation finds him frequently delaying his flight back home to New York which obviously quickly adds up to a fortune. Final Portrait could just as easily be analyzed as the lengths friends, who also happen to be artists, support one another as it is about the detailed few weeks of a celebrated professional. 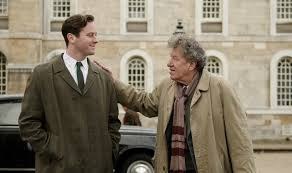 Speaking of that, moviegoers might logically pre-rationalize that Alberto must operate in an exquisite studio filled with colorful paintings, gorgeous sculptures, and enough superfluous decorations to make a wealthy person envious; after all, the man is living it up in Paris rich. In actuality, things are the total opposite, as the pair undergo the procedure inside of a dirty, monochrome (the studio here is probably the closest a film can get to black-and-white while technically filmed in color), square area covered in dust and the aroma of cigarette smoke (chain-smoking is one of the ways Alberto deals with his self-reflective issues). If Leonardo DiCaprio painting Kate Winslet in the nude during Titanic is one of the sexiest acts ever put up on the screen, Final Portrait is the ugliest, but also intentionally so and bearing striking cinematography.

Aside from utilizing some tracking shots inside the slightly claustrophobic space, writer and director Stanley Tucci (who hasn’t made a film since 2007’s Blind Date, but here is adapting James Lord’s memoir A Giacometti Portrait) also plays around with lighting, having Alberto get to work at different times of the day to keep an otherwise repetitive routine refreshing aesthetically, and frames the characters from a variety of angles, most notably one containing a large bust with an elongated neck in the foreground of the shot split directly between the two, seemingly symbolizing every artist’s worst enemy, creative block. The camera is also fixated on minor characters performing mundane tasks, whether it be Alberto’s brother played by Tony Shalhoub doing some home improvement on the studio or café waiters bringing over cups of coffee, as if to highlight the simplicity of these actions in comparison to creating art. Whatever interpretation viewers come away with, it can safely be said that while Final Portrait can occasionally drag on, even at the short running time of 89 minutes, Stanley Tucci directs the hell out of it with his photographer. 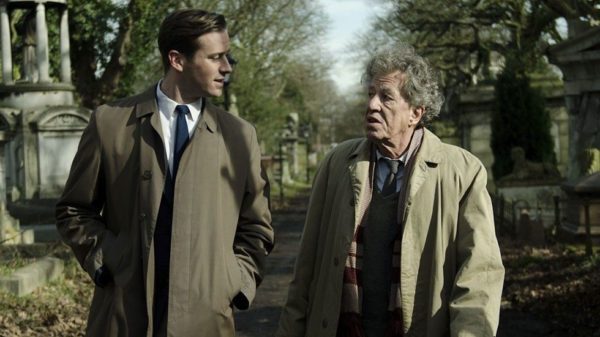 Outside of watching a grumpy old man sketch a younger and much more handsome writer, there are glimpses of Alberto’s home life which seem determined to make audiences despise him, or at the very least, view him as an unlikable manchild. He is now disinterested in his love/former muse Annette Arm (Sylvie Testud) choosing to instead chase after a redheaded prostitute for inspiration, all complicating things to the point of belligerent arguments that have Alberto presented easier to dislike, even if this woman in her prime is the new source of his artistic expression. At least there is humor derived from watching a revered artist cursing out loud and undoing various aspects of his painting on repeat, but some of his other traits are simply ugly, and the kind of behavior that mother! and Phantom Thread recently and brilliantly torched. Sure, those in any artistically creative field go through unimaginable frustrations and feel insurmountable amounts of pressure, but they lose sympathy when they become jerks. It would also garner more empathy if the people around Alberto had just a little more character to them.

Past that, Final Portrait reaches a natural but flat conclusion, the kind that leaves little to ponder afterward. A reliance on narration from Armie Hammer and a pointless stretch where the necessary prostitute goes missing suck further energy out of the proceedings, but Geoffrey Rush gives a methodical performance that captures the intricacies of a complex tortured artist, and to the film’s benefit, he swears, smokes, and paints through nearly every scene.