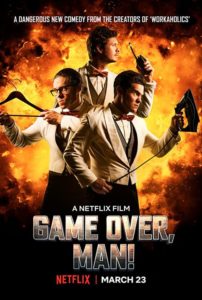 Three friends are on the verge of getting their video game financed when their benefactor is taken hostage by terrorists. 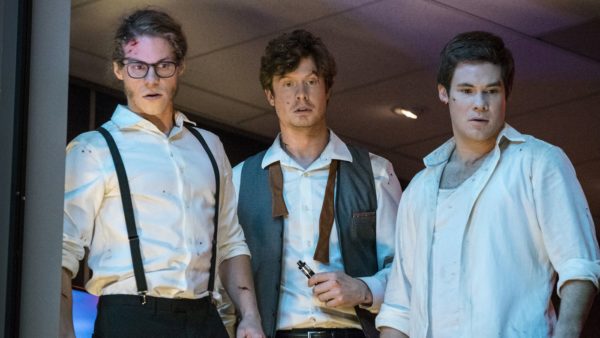 Fans of Kyle Newacheck and the central trio’s hit show Workaholics should find plenty of amusement to chuckle their way through this fast-and-loose send-up of Die Hard, even if the mileage will be decidedly more varied for most everyone else.

Alexxx (DeVine), Joel (Anderson) and Darren (Holm) are three video game developer pals struggling to make it in the industry, holding down jobs as hotel waiters to make ends meet. While working a fancy shindig held by the illustrious Bey of Tunisia (Utkarsh Ambudkar), they decide to pitch their game to him, but before they can lock down the funding, the hotel is assaulted by a Hans Gruber-esque terrorist (McDonough) and his team of goons. To secure their investment, save the Bey and save the day, the three slackers must spring into action.

Effectively marketed as “Workaholics meets Die Hard“, for the most part Game Over, Man! lives up – or perhaps down, depending on your perspective – to that primer. There’s an abundance of wilfully poor taste, with various body fluids festooned across the screen in practically every other scene, three leads enthusiastically recalling their popular screen personas, and the heightened addition of a kooky action-thriller trim. 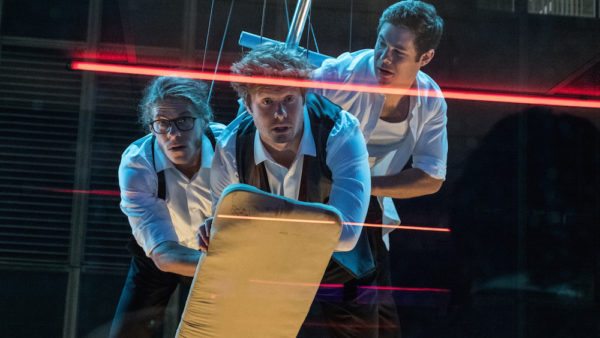 Is it hit and miss? Absolutely. There are a plenty of gags here that just don’t work or feel disappointingly half-baked; a comedic subplot revolving around Joel being gay, for instance, is desperately stuck in the early 2000s and lacks the witty subversion you might expect from this troupe of creative minds. Meanwhile, if you’re averse to gross-out gags, you should probably steer clear also, because the film practically revolves around them, and typically, they vary wildly in quality.

The most surprising aspect of the film – and the one liable to be most divisive – is the seemingly deliberately skittish tone, which becomes legitimately harsh at times, especially during its many brutally violent action sequences. Though many probably expected a tenor similar to the big-screen 21 Jump Street reboot, with over-the-top gore that’s resolutely played for laughs, here much of it is straight-up sadistic. A sequence where Alexxx takes an industrial deli slicer to man’s face is especially gnarly, and not really funny at all.

If you are a Workaholics fan, though, you’re far more likely to be on-board with the film’s many questionable elements, not least a rather forced central three-way bromance. The sweetness necessary to make it work isn’t really there, and the brief asides in which the film tries to get treacly feel tacked on from an entirely different movie. Plus, in a film that features genital dismemberment, is the target audience all that keen to get soggy-eyed about three friends renewing their fraught friendship?

If the violence strikes a weird note and the action itself is fairly ho-hum, the film is much more successful on a level of pure comedy as written and performed. The central trio are, of course, terrifically talented, and their verbal sparring typically generates the biggest laughs throughout. When you mate this with many passionate, irreverent nods to the aforementioned Bruce Willis-starring action classic, Game Over, Man! takes on a beguilingly odd quality that’s hard to entirely dismiss. 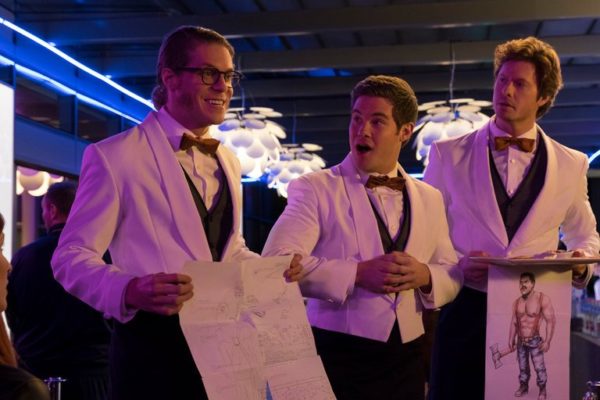 There are also upwards of a dozen famous faces appearing in cameo form – the identities of which shan’t be spoiled here – and while they’re shamelessly lightweight revolving door appearances, they do nevertheless further elevate the film’s agreeably surreal tone.

As for the remainder of the supporting cast, perennial B-movie baddie Neal McDonough is once again wasted as an also-ran rent-a-terrorist, Daniel Stern briefly (and hilariously) appears as a sleazeball hotel honcho, and Rhona Mitra and Aya Cash bring some much-needed female presence to the film, even if they’re strictly background players here.

While Newacheck and co. don’t quite deliver on the off-the-wall promise of their loony concept, there’s just enough inspired insanity here to please Workaholics die-hards, even if fans of actual Die Hard might be left a touch underwhelmed. It is a perfectly watchable, intermittently hilarious romp that just needed to try harder to become the riotous cult classic it certainly could’ve been.

Worry not, though, because the closing sequence half-jokingly teases a sequel, which given Netflix’s voracious current desire to fill up their streaming slate with self-owned content, just might happen.