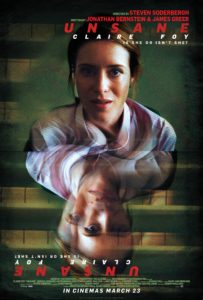 Financial analyst Sawyer (Claire Foy) has just started a job in city where she knows nobody.  After a sudden panic attack, she seeks counselling at a local clinic but finds herself admitted as a patient.  She says she’s being obsessively stalked and that the man concerned is one of the staff.  Or is it all in her head? 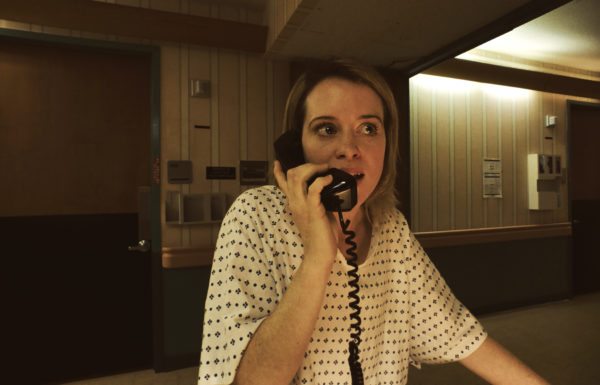 Insane or unsane?  The title of the latest from Steven Soderbergh means “not sane in some way”, while the more familiar of the two is defined as “having lost all sanity.”  He’s deliberately chosen the more ambiguous one to reflect the tone of a film that constantly poses the “is she or isn’t she?” question.  Even if the poster points towards the studio not quite understanding that the difference between the two words is more than a single vowel.

At the centre of the story is Sawyer Valentini (Claire Foy), an efficient, hard headed financial analyst who’s just moved to a new city and is settling into her latest job.  Knowing nobody, she starts making friends online but, when a date brings on a panic attack, she seeks counselling.  It emerges that a harrowing experience with a stalker is still taking its toll but, instead of being given another appointment with the counsellor, she finds she’s been admitted to the clinic – which was not quite what she expected.  As a patient, she discovers that her stalker is working there as a member of staff.  Or perhaps he’s not. 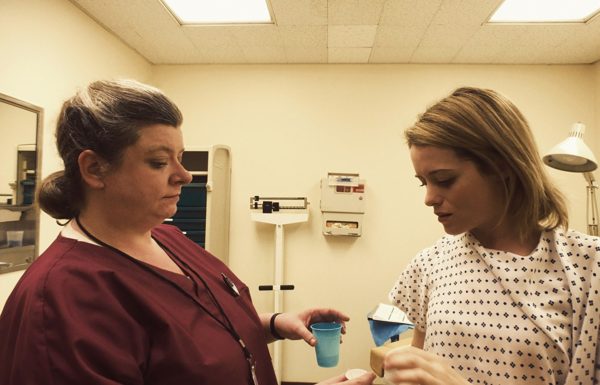 That Soderbergh shot the film on an iPhone has been widely reported.  He’s not the first to do this, but it still points towards something different and innovative.  Yet it doesn’t wholly deliver on that front.  It’s certainly shot well and there’s some smart camera angles, but there’s nothing that couldn’t have been achieved using a more conventional piece of kit.  There seems to be no reason for shooting this way – no connection to the plot or to anything in particular in the movie.  As it progresses, the scent of a gimmick becomes all-pervasive.

Which isn’t to say that it’s not an enjoyably schlocky piece of entertainment, 90 minutes of jumps, intensity, the occasional flash of gore and instant gratification.  And, at times, it gets seriously nasty.  Because of all that, the holes in the story and the sense that Soderbergh is showing off and playing with his audience aren’t overly obvious while the action is taking place.  It’s only after the credits have rolled that the question marks arrive and enthusiasm starts to wane. 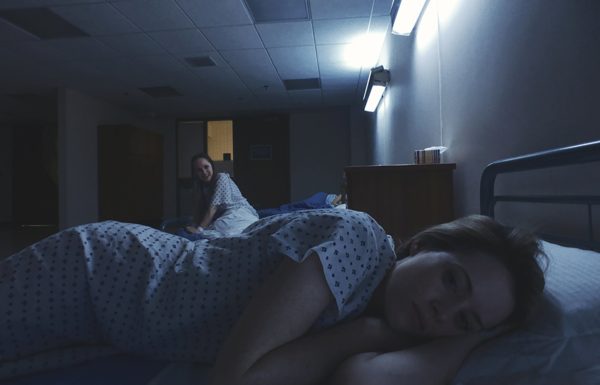 What makes Unsane so watchable is the cast, Claire Foy in particular, a million miles away from her pristine monarch in The Crown or the spirited wife in Breathe.  Throughout the film she’s not especially likeable, she’s troubled and yet she still carries the audience along with her.  The lingering doubts over whether what’s on the screen is genuinely happening or just in her imagination help the film tighten its grip.  As does its lingering sense of uncertainty: every time you think you’ve cracked the puzzle, it jack-knifes and takes you down a completely different route.  It isn’t just Foy who impresses.  Juno Temple is excellent as one of the other patients in the clinic, as is Jay Pharoah, although his reasons for being there are wide open to question.

Brutal at times, gripping at others – although it’s not quite edge-of-your-seat stuff – Unsane has great entertainment value.  All plus points.  It’s only when you start thinking about it afterwards that it starts to unravel …..