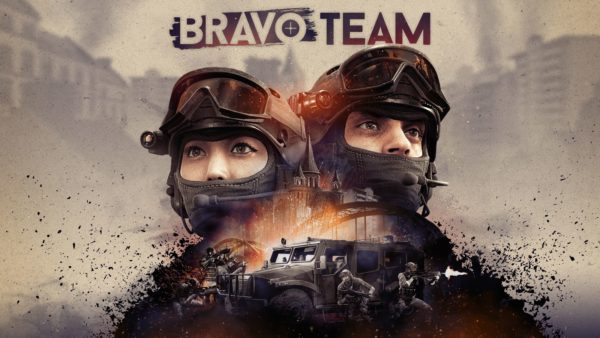 Bravo Team is the latest piece of evidence that developer Supermassive Games is probably spreading themselves a little too thinly these days, following on from last year’s middling PlayLink thriller Hidden Agenda and the woefully disappointing VR horror romp The Inpatient back in January. While just about every PSVR owner has been clamouring for the platform to get its own worthy successor to Time Crisis that makes stellar use of the marvellous Aim controller, this embarrassingly clunky, depressingly soulless shooter sure isn’t it.

Set in a “fictional modern day Eastern European city” as Sony puts it, Bravo Team sees the player filling the shoes of an anonymous cardboard cutout soldier protagonist as he gets caught in the middle of an escort mission gone awry, with he and a teammate being besieged by a seemingly never-ending wave of equally faceless goons. That’s all the setup they give you, and in a better-engineered game, it just might’ve been enough to pass muster.

From the moment I began playing the game’s two-hour campaign mode, it immediately didn’t feel right. As some players also reported while playing The Inpatient, the size of the protagonist’s body and those of other characters feel somewhat larger than they conceivably should, diminishing the immersive potential right away. Granted, VR performance can vary wildly depending upon individual player set-ups, but the rest of the game displayed just fine – relatively speaking, of course – and many other players have also been reporting the same issue. 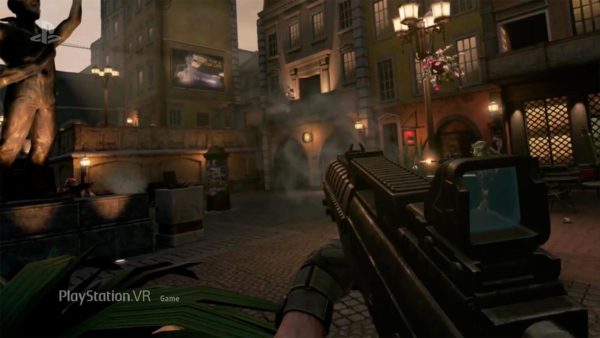 There are just so many fundamental issues with the gameplay that it’s truly shocking this is being touted as an apparent “AAA” offering from a respected developer. Where to begin? The shooting is floaty, laggy and imprecise, meaning it’s hard to even enjoy the game as a glorified tech demo for the Aim controller. The movement mechanic meanwhile is infuriatingly wonky, requiring you to scan the horizon for a cover icon and press X to move forward, at which point the game will jarringly cut to a third-person perspective as you run to cover, before cutting back to first-person. This poorly thought-out system will frequently leave players disorientated during populous firefights and probably cause more than a few unnecessary deaths, too.

Oh, and let’s not forget the enemies. The fact they’re basically generic shooting gallery fodder could be forgiven in an otherwise better game, but not the fact that they will be relentlessly thrown at the player in waves unless they keep forging ahead. I got so fed up with the irritating surges of copy-paste enemies that I eventually started just teleporting past them to the next checkpoint, which probably shaved a decent amount of time off my playthrough (and mercifully so).

Rather annoyingly, enemies will however sometimes spawn behind you, forcing you to either fire at them at an hilariously awkward angle, or double back to a previous vantage point and take them out. It’s also extremely common for soldiers to run behind you when you attempt to move forward, which is super infuriating, especially as the run-to-cover animation is so damn long.

At least the game is relatively easy for the most part; if you’re downed, your partner – AI or an online comrade – can heal you, and progress will continue unless they’re also mortally wounded before they can patch you up. The atrocious quality of the game’s AI, however, means that your CPU buddy may just flat-out ignore you, leaving you to bleed out and watch the slow-fade dying screen for about 30 seconds. 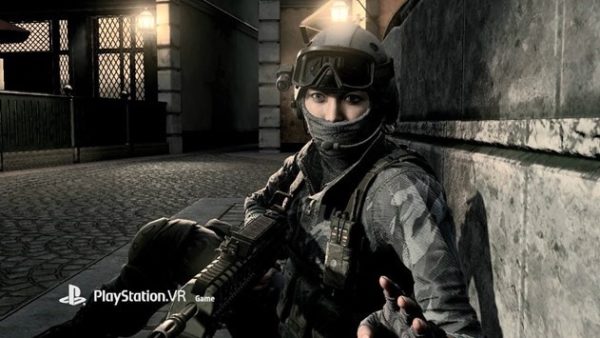 Some of the checkpointing also isn’t great; it’s no fun shooting your way through a wave of enemies, getting wounded in the final stretch and being thrown all the way back because your partner couldn’t reach you in time. To that end, it’s thoroughly recommended that you play through as much of the game as possible with another human, because it’s infinitely more enjoyable as a shared experience (shouting your displeasure for the game via voice chat really is quite cathartic) and you’re far less likely to die with another brain in the fight. You can also replay the game’s chapters with a pal in Score Attack mode, but honestly, one playthrough will be enough for most.

The game does become mildly more entertaining when you gain possession of a shotgun and a sniper rifle in the second half of the campaign, but these brief thrills can only serve as a mild apology for what is fundamentally bad gameplay. Once the credits rolled on Bravo Team‘s brief story mode, I was decidedly relieved that it was over, which is incredibly sad considering how few PSVR games support the Aim controller right now, even almost a year after the release of Farpoint.

Even as a pure aesthetic experience the game also fails, which is again surprising given how atmospheric and moody The Inpatient was at times (despite being a bit naff overall). Here the visuals are legitimately quite ugly for the most part, with the lighting, character models, environmental textures and animations feeling woefully behind-the-times, even with the lesser standards of PSVR well in mind. Aurally, the game is absolutely forgettable; the gunfire is passable, perhaps, but the voice-acting is laughably bad, and what little original music there is I have no memory of whatsoever.

Of the 80+ VR games and experiences I’ve played over the last year-plus, Bravo Team just might be the worst, and certainly the most maddeningly disappointing. So thoroughly devoid of charm, personality and entertainment value as it is, it’s utterly baffling that Supermassive would dare put something so low-effort and poorly-made on the market, and it’s certainly a major strike against their credibility moving forward. 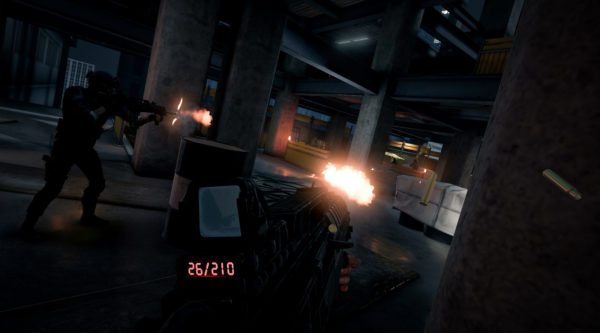