It’s time for Xbox Games with Gold to be revealed for April 2018 but there are no fools in the selection of games on offer for those with Gold membership.  There’s puzzles, racing, horror and parkouring action and as always, a chance to earn yourself up to 4000 gamerscore. 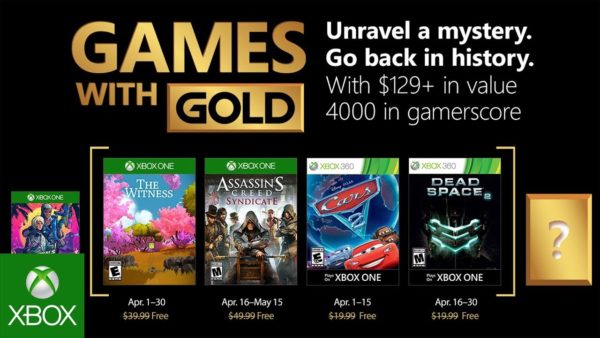 For the Xbox One throughout April is the first person puzzler, The Witness, by Thekla, Inc.  This puzzle adventure will see players wake up on an island with no memory of who they are or how they got there.  In order to regain their memory players will need to explore the island and discover clues by solving over 500 puzzles.  April 16th to 15th May Players will have chance to take on the Templars in Victorian London in the excellent Assassin’s Creed: Syndicate.

For the Xbox 360, and also backwards compatible for the Xbox One, is action packed racer Cars 2: the Video Game until the 15th April.  Based on the Pixar movie, this action racer will see players race as one of 25 characters to become a world class spy.  From 16th April is the science fiction horror Dead Space 2 and sees Isaac Clarke take on a new Necromorph outbreak on a space station orbiting Titan.

So there you have it, four great games to last you through all the April showers.  Enjoy.