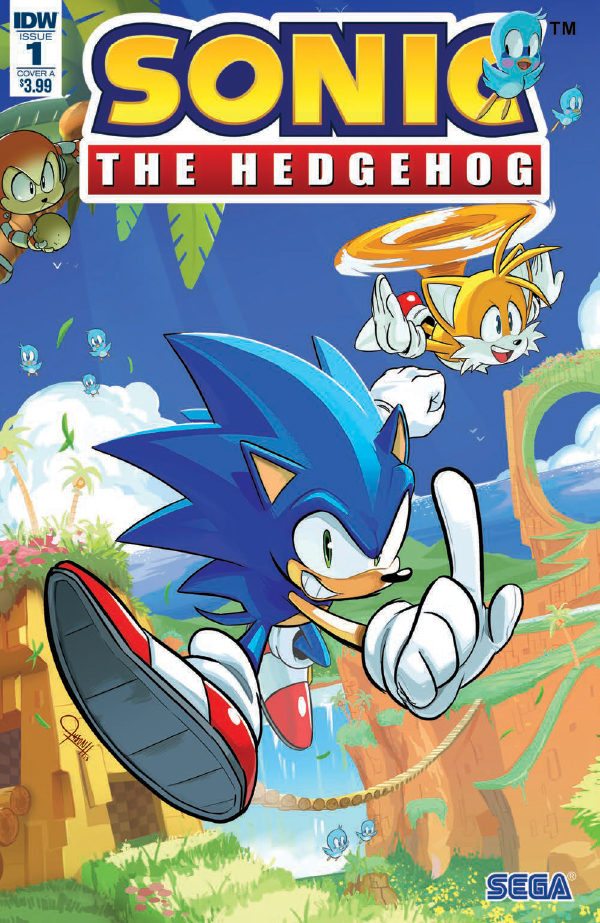 The Sonic franchise has, it’s safe to say, had highs and lows. For every Sonic the Hedgehog (1991), we’ve had Sonic the Hedgehog (2006). The various TV shows have been of mixed quality too, with the franchise as a whole having been in the doldrums whilst others such as Mario have maintained their quality. The last year has seen things swing upwards though, with the release of Sonic Mania last year and now the first episode of Sonic Mania Adventures being released (thank you Tyson Hesse!). Both are fantastic takes on ‘classic Sonic’ that update him for modern times.

I’ve never followed the comics, only being aware that Archie had been publishing them for a very long time. 20 years it turns out! So for the license to be changing hands is big deal. Fortunately I’m well aware of the new publishers and I’m expecting great things from them.

IDW have handled TMNT, Ghostbusters, and Transformers with a lot of success over recent years, so they feel like a good fit for being the custodians of another cherished property. That they’ve been brought in people who worked on the previous iteration of the book seems like a sound plan too.

Issue #1 is a nice, easy introduction to the world and to Sonic. If you know him already there are no surprises. If you don’t, you’ll quickly realise he’s fast, confident, impatient, and a hit with just about everyone. Since the last defeat he inflicted upon Eggman (He’ll always be Robotnik to me), things have been quiet. Sonic and his friends are turning things around as Eggman’s forces are spread out and rudderless. But that seems to be on the turn.

Once I let go of my thoughts on preferring Classic to Modern Sonic, this is a good looking comic. Sonic is easy to get wrong but here he’s just right. Not too human in his build for a start. But his spin-dash looks good and the panels get across his athleticism well. The expressions are great, especially when Sonic and Tails are conversing, with their own level of banter easily conveyed.

My main concern is that it all feels very light at the moment. For the first few issues I’d expect there to be some settling in, but do Sonic stories ever get heavy and into real detail? Perhaps that’s something to discover, but if it’s all like this I’d just as well play the games.

Concerns aside, Sonic should be vibrant, lively, and full of character. On that basis, #1 deserves a gold ring.