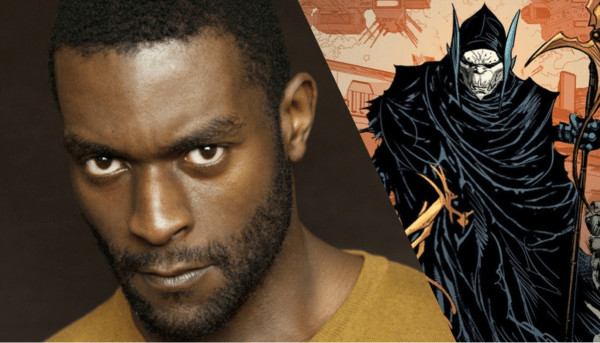 Hi Alex, how are you doing?

I’m very well thank you, how are you?

Excellent! So, how did you first get involved with the part?

So, about a year and a half ago I was in New York, working on a play, and it was the hustle time of the year – so I was going to auditions during my lunch break and so on, and then one week I went in for Black Panther. I didn’t get that part, but they then sent me the sides for Avengers, and within two days they had offered me the role. That was about a year and a half ago.

What can you tell us about the character?

He is a member of the Black Order, which is a group of four, all generals under Thanos. He is immortal, by way of his Glaive, which is the blade that he carries. It’s strong, strong enough to cut through atoms. He’s also married to Proxima Midnight, a sort of dark marriage.

The fact you’re playing the role at all is pretty much top secret – how have you been dealing with that?

[Laughs] Well, it’s been interesting! Of course, it’s been a really exciting process, so it’s hard not to tell your friends or your family about it, but because the nature of it is so different it’s been easy to keep under wraps – though as we’ve been getting closer and closer to it, it’s been getting more difficult.

Have you told anyone yet at all?

I told a few people, mainly close family. I had to! I was travelling all over the world – “where are you going?” “I’m working on a project!” – so I had to keep them in the loop somehow. No details about the project though. Of course, of course! So, this role was a motion capture role – what’s that like as an actor? It’s the first time you’ve done that, isn’t it?

Yes, it was the first time I did mocap. It was kinda frightening at first, because your sense of feedback isn’t the same, so in order to prepare for the role – I went to Juliard for grad school, so I went back to one of our physical movement teachers, who focused on mime, and teaching us how to pull a character from a physical gesture, and create a voice with sound. That was extremely helpful with working out how to create the texture of Corvus; the next part was getting used to having a camera on your forehead all the time, which is very strange. Eventually though it becomes part of who you are in the moment though, you know? It’s also kinda weird to be walking around in a skintight garb – very strange! [laughs]

Have you seen much of the completed version, with all the CGI aspects finished?

Now, it’s not the first time you’ve played a comic book villain – previously you were Papa Midnite in Constantine. How do you think Midnite and Glaive compare as antagonists?

Well, they’re both immortal. Part of the trick of playing a villain is finding the love in the character’s journey, and not playing ‘evil’, you know? I feel like with Papa Midnite’s journey, one of the key facts was his love for his sister Cedella and how to weave that into his, I guess, evildoing. With Corvus, there’s a strong connection to Proxima, but also he betrayed his people to work with Thanos. I created my own little history about why he’s looking for redemption with Thanos, and searching for retribution through his work with him. I find it kinda helpful to create that backstory.

Is that something you tend to do with most of your roles?

Well, it’s just letting your imagination run wild, and fill in the gaps that the factual information may not always give you – that way you have a full life to stand on, you know? That does lead nicely into what I was going to ask you next, actually – something you spoke about when you were playing Midnite was the fact that he had a grounding in real cultures, and that was something you drew on a little bit for the role. Obviously, that’s not quite the case with Corvus Glaive, being an immortal space alien, so how did you try and find the core of the character?

[laughs] Yeah, Midnite is heavily based on cultures which still exist today. With Corvus – and mind you, as I’m talking to you, I’m also watching Ancient Aliens on the History Channel – there’s a history that may not be in the history books, but of what it means to be an alien. [It’s] outside our normal viewpoint, just to have a different level of consciousness. That opened up my imagination about what their world could possibly be like, and how they communicate on multiple levels – whether it be through actual English, or through clicking, or whatever. It just let me go wild – there were no limitations in terms of how he moved and how he expressed himself, you know?

Just quickly while we’re discussing Constantine, I suppose I’ve got to ask – Matt Ryan has recently been reprising the role in Arrow and so on. Is that something you’d be interested in doing?

Oh, I’d love to revisit Papa, and it’d be fun to work with Matt again – it was a pleasure the first time, you know? Just a great cast and crew, and there was something special about that for me – we bonded heavily, and we’re still friends, we keep in touch and whatnot. But yeah, I’d love to – it’d be pretty awesome to work with him again.

Are there any other projects you’re working on at the minute you can tell us a little bit about?

Yes! We haven’t started shooting yet, but this summer I’m going to be working on a new project for CBS called Blood and Treasure. A couple of years ago I got to work on a show called Limitless and a good member of that team is working on this show now, which is a bit of an action-adventure series. It’s similar in tone to… I’d say a cross between Indiana Jones and Ocean’s Eleven, and we’re going to be shooting in Montreal and parts of Europe this summer. It should be coming out next year in 2019.

Sounds good, I look forward to seeing it. We’ll have to talk again when that comes out.

Finally, then – what’s the most important thing you’d like someone to take away from your performance in Infinity War?

I guess the big part of what I want people to take from it is that villains aren’t necessarily evil – they have a different perspective from your hero, and it’s important to see that those if those perspectives are tweaked even slightly, they can be perceived in the wrong way. I hope that his humanity comes through even in spite of his actions! [laughs]

Yeah, I understand what you mean – a lot of the best fictional villains are like that, aren’t they?

It’s more fun to delve into the complexities of why you do things, rather than how bad a villain is, yeah.