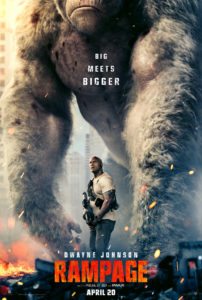 Primatologist Davis Okoye shares an unshakable bond with George, the extraordinarily intelligent gorilla who has been in his care since birth. But a rogue genetic experiment gone awry transforms this gentle ape into a raging monster. As these newly created monsters tear across North America, destroying everything in their path, Okoye teams with a discredited genetic engineer to secure an antidote, fighting his way through an ever-changing battlefield, not only to halt a global catastrophe but to save the fearsome creature that was once his friend.

Johnson stars as Primatologist Davis Okoye, the San Diego Zoo’s beefcake gorilla whisperer. George (Jason Liles), an albino-coated alpha, is his best friend – not a human – but things get complicated when Davis’ buddy grows double in size overnight. It turns out Energyne Corporation dropped some genetic modification serums from space, one landing in George’s enclosure. The other two? One in the Everglades to be snapped-up by a croc, the other inhaled by a wolf in Wyoming. Davis wants to save his furry companion, calming him down through sign language, but too many people want something different. Energyne CEOs Claire (Malin Akerman) and Brett Wyden (Jake Lacy), Agent Harvey Russell (Jeffrey Dean Morgan) – only disgraced sidekick Dr. Kate Caldwell (Naomie Harris) can help George, if company “antidote” vials can be recovered.

You will, for sure, be treated to *megatons* of destruction in the form of frequently downed helicopters, shattered window panes, decimated Dave & Buster’s storefronts – no architecture nor vehicular artillery is safe from even Hulkier primate fists. Better yet? Creature design and digital effects impress besides some backdrop green screen standouts. George, Ralph (what peanut galleries nickname Mr. Wolf) and Lizzie (never codenamed but yeah, it’s to me Lizzie) run amok through Chicago’s concrete jungle like they belong. Animation craftsmanship strong, both in dusty industrial destruction and Annihilation-lookin’ hellbeasts with bad tempers. Peyton works pixelated magic in San Andreas, and he does it again here.

The film’s three fugitive animals are Rampage‘s key asset – sounds like a no-brainer – but further than just physical rendering. Davis spends more time with George than he does most human characters, and their bond of “family” is beyond caretaker duties. Johnson’s keeper jokes around with George like one of the bros, his gorilla quick to tease and sign inappropriate gestures at opportune moments. Genuine development between Davis and George makes for a scenario that sits you on edge as the fearful, mind-controlled ape (we’ll get there) bashes his way through military roadblocks without bodily control. A man and his monkey, believable in companionship that swells in size.

Although, let’s take a step back and marvel at the story’s clunkiness. Specifically calling out Claire’s diabolical snake-skinned businesswoman who’d liquidate all her problems if she could – and dumbo Wall Street brat Brett (who’s always eating something?). Claire is fifty shades beyond shrewd, happy to sacrifice black ops soldiers (headed by Joe Manganiello) if it means doubling profits. Dr. Caldwell once believed she was doing good for Energyne, but Claire instead weaponizing DNA splices to generate growth hormone alterations that’d create the perfect superweapon. A bit exaggerated and ruthless, even if Ackerman has a blast playing a check-cashin’ Bond villain. Brett her witless puppy dog distraction with one single payoff.

Early comments from Peyton on his Rampage take suggested it’d be “scarier” than anticipated, which translates into Ralph’s muscular, skeletal-like wolfish design and found footage adaptation. Cinematography favors headcam soldier views to get away with multiple deaths and minimal gore, as overlords watch their warrior’s feeds cut to static one by one – their screams a product of poor mission planning. This leads to Jeffrey Dean Morgan – channeling Negan, playing Harvey Russell – and his snide cowboy quips, then Johnson’s Davis saves the day through very illegal means like the dashing animal conservationist action star he his. All pretty standard and expected, meaning a slower pace until George and Ralph go cross-country smashing. 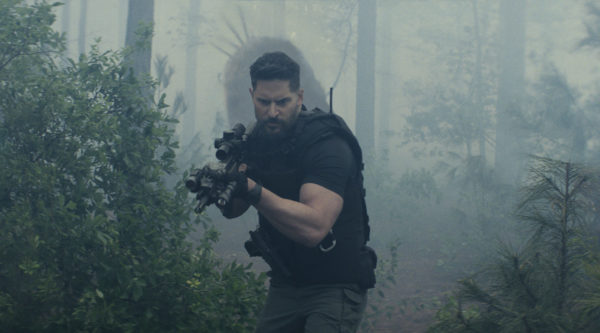 You can easily pitch a thesis about how shallow and uninterested Peyton’s vision is in terms of zero staked depth – Claire’s evil plot blasts radio waves that attract her creations to Chicago, casualties be damned – but, for certain crowds, CGI dazzlement and decimated skylines will be enough to squeeze out one heavy punch of mainstream fun. Johnson fist bumps George in a Dutch/Dillon homage, ballistics missiles fly while Godzilla-sized housepets turn on their masters, and a final tag team throwdown are what (pre) summer movies are made of. Johnson so in-tune with his oversized partner, dashingly overdramatic and undefeated by bullets, monsters or womanly wiles (seriously, he just forgets he’s shot at one point).

Does Rampage pack a conscious environmental or business minded warning underneath layers of debris and chewed corpses? I’d be a monkey’s uncle if I said yes. Specific references to source material don’t reach farther than a Rampage arcade machine in the Wyden’s penthouse headquarters and “Ralph” (Project: Rampage a cheap score), but even without naked scientists shuffling away embarrassed, Johnson’s voracious appetite for one-liners and shared scene work with George can be a barrel of fun. Watch the trailer. You know what you’re getting for better or worse. Nothing more, nothing less. Except maybe two of the most mean-spirited character deaths I’ve seen since Portman in Doom or “Loud Assistant” in Jurassic World?