Players of Sid Meier’s Civilization VI on iPad will now be able to get their hands on two brand new civs, a new scenario and two new Wonders in the latest DLC pack available now on the App Store for $8.99.  Players will be able to take control of either the Persians or the Macedonians led by the legendary Alexander the Great and conquer the world. 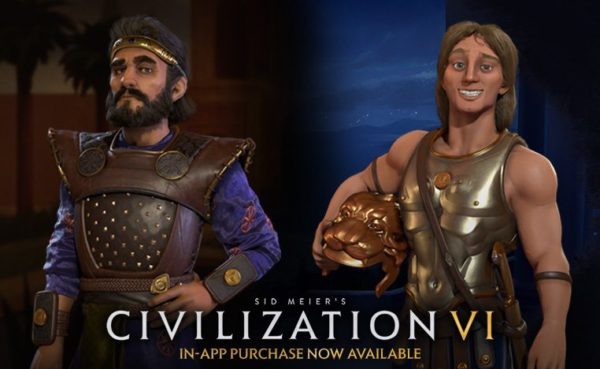 The legendary Alexander the Great leads the Macedonians and has the “To World’s End” ability which greatly reduces war weariness thus allows Macedon to stay at war for longer periods of time.  He also provides the Hetairoi which is a fast heavy cavalry unit that starts with a free promotion, this replaces the Horseman.  The unique civ ability is “Hellenistic Fusion” and provides Tech or Civic Eurekas depending on what Districts are present in a captured city.

Macedon’s city improvement is the Basilikoi Paides and can be built in any encampment without a stable.  This structure provides bonuses for all melee, ranged land and Hetairoi trained there, it also gives a science bonus whenever a non-civilian unit is created.

Another unique unit available to Macedon is the Hypaspist, this replaces the swordsman and gains extra bonuses from supporting units plus is stronger at besieging districts.

Cyrus leads the Persians and has the “Fall of Babylon” ability that gives movement and yield bonuses for a short time following the declaration of a surprise war, this ability also negates certain penalties as well.  The “Satrapies” ability gives Persia a free trade route when they develop Political Philosophy.

The Pairidaeza city improvement provides gold, culture and appeal plus bonus culture or gold for adjacent districts.  These bonuses will increase as players progress through the tech and civic trees.  Finally, the Persians unique unit is the famous Immortal, a swordsman with a bonus ranged attack and very strong defence.

The DLC will also come with a new scenario called “Conquests of Alexander” and will see players race against time to prove they are as great at conquering as Alexander.

Finally, two new wonders make an appearance, the Mausoleum at Halicarnassus will give additional bonuses from your Great Admirals and Great Engineers while the Apadana provides extra Envoys every time you build a World Wonder (this includes the Apadana itself).

This new DLC is available now on the App Store priced $8.99.