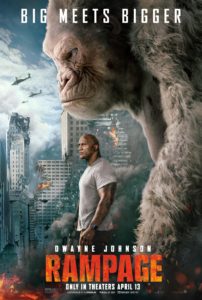 When an experiment in genetic editing goes disastrously wrong, an albino gorilla is artificially enlarged to extraordinary size and develops dangerous levels of aggression, as his primatologist friend tries to bring him back under control.

On the face of it, there aren’t many ways that Rampage can go wrong. It’s a self-confessed dumb action movie featuring the biggest movie star in the world and a selection of marauding beasties, from the same director (Brad Peyton) who helmed Johnson’s $450m hit San Andreas back in 2015. Trailers teased an exercise in exquisite silliness, which is the sub-genre that has propelled Johnson to the top of the Hollywood mountain. Rampage isn’t quite the avalanche to bring him toppling down to Earth, but it’s certainly a treacherous blizzard.

Things start promisingly enough, on a space station that’s exploding with a dangerous, genetically modified creature on board. When the debris from that station crashes to Earth, it happens to land in the vicinity of George – an albino gorilla in the care of primatologist Davis Okoye (Johnson). Within hours, George has swelled to an enormous size and has developed enough aggression to snap the neck of a grizzly bear “like a toothpick”. Davis is visited by Dr Kate Caldwell (Naomie Harris), who works for research company Energyne and claims she can help George before he comes to harm. Before long, a shady government operative (Jeffrey Dean Morgan) is also involved.

The most shocking thing about Rampage is how lacking in a sense of fun it is for most of its running time. There are scattered sequences of excitement and silliness, as well as a few decent quips from Morgan, but most of the highlights are in the trailer – along with a handful of creature reveals that should absolutely have been saved for the finished product. The rest of the film feels curiously bloated and uninteresting, as if any element of directorial flair from Peyton has been surgically excised. 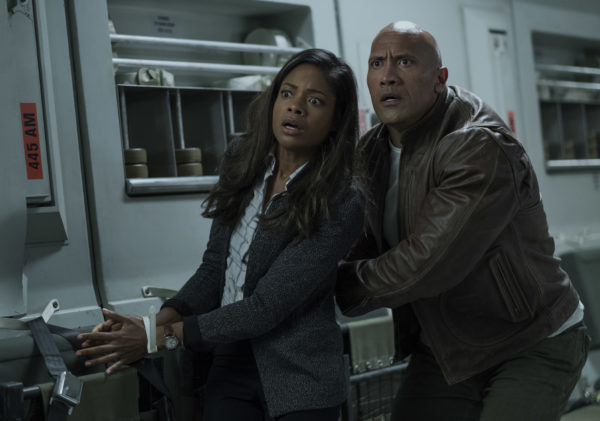 As a result of this absent flair, much of the action in Rampage feels curiously limp. One sequence aboard a plane seems to go on forever and, at almost two hours, the entire movie feels in need of serious pruning. Even Johnson’s trademark shtick as a charismatic action man looks tired and Naomie Harris gets very little to do, despite being the smartest character in almost every scene in which she appears. It’s only the smug arrogance of Jeffrey Dean Morgan and the villainy of company bosses Malin Akerman – whip-smart, calculating – and Jake Lacy – cowardly, goofy – that elevates the movie on a performance level.

All of the above would be acceptable were Rampage successful in terms of the spectacle it has used to sell itself. Unfortunately, it’s significantly outshone in that respect by the monstrous delights, even in the past few weeks, of King Kong in Ready Player One and the multiple marauding kaiju in Pacific Rim: Uprising. The CGI is mostly solid, but there are some ropey moments that stick out like a sore thumb, and the stabs at emotion are utterly useless given how little time we spend with the characters before everything starts to go horribly wrong.

That’s not to say that Rampage won’t find an audience. As an evening at the multiplex for the family to enjoy, there are considerably worse stories out there, but everything about the film feels like a missed opportunity. The charisma of Dwayne Johnson lifts it to a certain level and he’s always eminently watchable, but there’s nothing in here that’s even half as entertaining as he is at his best – whether it’s a gorilla throwing tanks around like paper planes or a 30-foot wolf with wings.