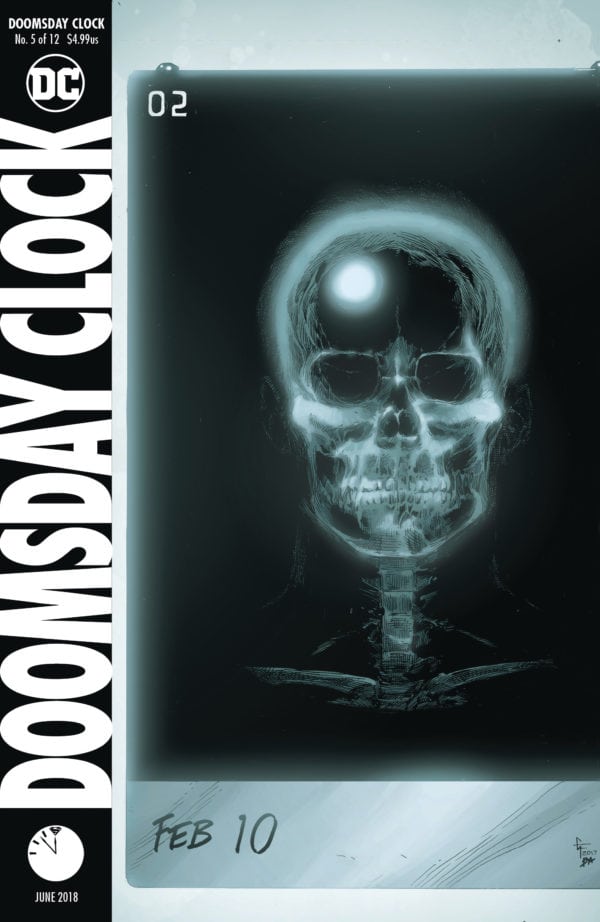 It has been a very long wait since Doomsday Clock switched to a bi-monthly schedule, but the latest issue of the series is finally here. Geoff Johns packs Doomsday Clock #5 with a lot of dense material, but the varying characters and plot threads are also coming together in some intriguing ways. Combined with Gary Frank’s art, this definitely marks the best issue of the series so far.

Since the second issue of the series, Johns has made it clear through the story that it will feature a wide host of characters and stories, especially ones picking up on some of the central mysteries of the DC Universe such as what happened to the Justice Society, why is Saturn Girl locked up in Arkham and, most importantly, why has Dr. Manhattan come to and changed the DC Universe? Johns deftly begins to make these plot threads converge as Ozymandias comes face to face with Batman and Johnny Thunder goes on his own quest and meets some familiar faces.

Behind all these meetings is some advancement of the story over the mysterious Supermen Theory, a conspiracy around the world that is gaining credibility and causing increasing tension that claim the U.S. government has manufactured most of its meta-human population asa means for a super-powered army and spy network that simply masquerades as superheroes fighting supervillains. This story finally got us to see more of Superman and Lois Lane as the pair begin to investigate the origins of this theory. It’s very nice to see Superman in this issue, even if it’s just in a relatively small role, but he’s been oddly absent from the series despite Johns saying it would deal with the dichotomy between Superman and Dr. Manhattan. It also shows just how much of a great team Supes and Lois can be when they work together on a story.

Johns also dives into some of the bigger themes of the story as Ozymandias deconstructs Batman and his compatriots as people just playing in masks while they let the world go to ruin by not dealing with the larger problems. It was a strong theme in the original Watchmen and a large reason why Ozymandias did what he did and it’s once again played with here as a possible reason for why Manhattan came to the DC Universe. There’s also some meta-commentary at play as Ozymandias comments on how many people seem “lost in the narrative of good versus bad” given that Johnny Thunder, Saturn Girl and other members of the JSA who were forgotten in the New 52 and shuffle of DC Rebirth. Again, Johns is calling back to the Watchmen‘s meta-narrative on the nature of comic book storytelling in a new and interesting way.

Gary Frank’s art is again a high point of the series. This issue features the nine-panel grid on nearly every page, showcasing the need for Doomsday Clock‘s release schedule to shift as Frank puts a lot of work into each and every image. There is a great amount of detail throughout the book, particularly in Frank’s facial expressions. Brad Anderson’s colours only help make Frank’s artwork standout and uses a lot of variety, from darkened rooms to the glow of Gotham’s downright riots. When it comes to those darkened areas of the issue, Frank and Anderson play well with their use of shadows and making a certain cosmic item glow bright. The artwork definitely makes the long wait between issues worth it.

Doomsday Clock #5 is another stellar issue in the series and arguably tops the previous one as being the best so far. Johns writing explores the characters and themes in an intriguing manner while Frank and Anderson make some eye-popping art. While it’s a shame we have a bit of a longer wait to the next issue, due August instead of July, and one that’s compounded even more by the cliffhangers we received, when the team is this good it’s hard to argue with the results. Hopefully though Doomsday Clock will make more use of Superman and Manhattan proper soon rather than later.