Tom Beasley sits down with Thanos himself, Josh Brolin, to chat about his performance as Cable in Deadpool 2, as well as creative swearing and the fact his face is everywhere right now…

In any other year, portraying the fan favourite character of Cable in the sequel to Deadpool – a $730m global hit – might have been the most significant superhero credit on Josh Brolin’s admirable movie resume. However, Brolin’s face is currently haunting the nightmares of children everywhere after his appearance as uber-villain Thanos in Avengers: Infinity War. It’s impossible to avoid that face right now, with Brolin’s visage – either angry and purple or craggy and cybernetic – staring down from the side of every bus, train station and billboard. When Deadpool 2 hits cinemas next week, you’ll almost certainly be able to walk straight into the screening of Infinity War in the adjacent room at the multiplex.

Brolin is bursting into the Deadpool world as Cable – a cyborg from the future who has travelled back in time to right a wrong that could save his family. The character is beloved by comic book fans and was teased in the post-credits sting of the first movie. So, no pressure.

Ahead of the release of Deadpool 2, Brolin came to London and we went along for a chat about all things superhero, Brolin’s regrets about Jonah Hex and his worries that people might just get a little bit sick of him.

How familiar were you with Deadpool before you took this role?

I was familiar with it. I’m pretty honest about this stuff if I haven’t seen the film or read the comic books. I did see the first one and I loved it. I’m a fan of Ryan’s and I thought it was a great, new, irreverent, satirical tone that I just understood. I thought it was a really fresh take on this whole thing.

Obviously, the Cable character is huge for comic book fans. Did you have any input into the way the character looks? How much came from you, as opposed to the comics?

It’s all a kind of familial thing. It’s a collective creation, like Thanos or like No Country for Old Men. They hopefully hire the right person; I think I have a fairly active imagination and don’t really power play my position. I like the idea of going up to the craft services guy and asking “is this working?” and they say “no” and I get a fresh opinion on what I’m attempting. Sometimes things don’t work.

There was a haircut David Leitch had, which was similar to Cable the way you see it. I felt like we needed to go further with it and it’s not necessarily exactly like it was in the comics. Rob Liefeld, who created all of these characters, was really important for me and he and I are fairly close now. He just saw the movie again the other day and texted me to say “dude, I literally could not be happier”. That’s a huge thing for me.

In terms of expectations, it’s quite interesting. You’ve just come off Thanos, who’s someone who has been built in to the film series for so many years, then you come across to Cable, who has this rich history in the comics but has only been briefly mentioned in film. What is the difference in expectation between the two roles?

None. When you have such a massive comic book base and a demographic that’s as large as that globally, there’s an expectation to the point that I don’t even understand it. I don’t feel the pressure of it because I’m too isolated. My brother lives in that world and collects these comic books in storage, where they’re the only things that are covered. [laughs] I would defer to him and say “is this the right direction?”, but I’m lucky because I’m not really affected.

I would see on Instagram people saying “you better not fuck this up” and stuff like that and it makes me smile. It doesn’t make me bear down at all. To me, the more responsibility there is, the more active my imagination is and the more I have discipline around it. I’ve done so many movies now and things kinda turn out like they turn out. Even if you did it exactly like you thought a comic book would do it, there would be somebody else to say “yeah, but what about that line of Thanos?” or “what about that line of Cable?” So it’s a no-win situation, which I love being in. [laughs]

You’re doing two comic book movies released so close together.You go into any multiplex right now and it’s you as Thanos and you as Cable on posters. Was there any trepidation about going back to comic book movies after Jonah Hex and the kicking that got, fairly or unfairly?

No, because that would be like saying “was it tough to go back into movies after you’d done a bad one?” period. Some movies don’t turn out. They just don’t and you can’t put too much onus on it. The only thing about Jonah Hex is that I don’t think that was a bad character and I got a lot of really good actors to be in that movie. It just didn’t work. We had the wrong director and we had a studio that put too much emphasis on changing it.

Ultimately, what I would like to do is go back and do Jonah Hex again in the way that I initially wanted to do it, as kind of a guerrilla $5-7m film – a Jason Blum film, that I think would be amazing. But, will I do it? Probably not.

You take each experience for what it is. We did Only the Brave and then that came out and nobody saw it. Then it came out on DVD and streaming or whatever and then I had firemen coming up to me at the grocery store with tears in their eyes saying “thank you so much for making that movie”. So ultimately it’s worth it. You know, The Big Lebowski didn’t make a tonne of money, but 20 years later it’s one of the great cult films of all time. So who knows? It’s not up to you. It’s just up to you to make the film.

What was it like coming into this world and working with Ryan Reynolds? Everyone says that he and Deadpool are almost interchangeable, so what was it like being in that world and being around him on this set?

It was nice for me because I felt like I had something to lean on, where a lot of times in movies you don’t. Maybe the director, but if you don’t have the director there’s not a lot to lean on whereas, because I was such a fan of the first one, I trusted his understanding of the tone because he created it. So when I would feel a little lost, I would lean on him and say “what do you think?” He’s a fun guy who creates a great set. He’s created a tone that’s very unique.

I think he is the only reason why I would sign on for four movies. That’s an idea that’s not very attractive to me. I like something that’s finite, like Thanos is finite. I like that. The germinating of this story and this character sounds like a good time.

When it comes to the set, Ryan gets a lot of attention for his creative swearing. Aside from Ryan, who would you say was the best at swearing? Would you take that mantle yourself?

Swearing? Me, for sure!

You get at least one excellent C-bomb in the movie…

[laughs]It’s true. I had a good time swearing on this film. When I didn’t know what to do, I would just resort to a nice, big swear word.

TJ Miller is pretty good though. I have to say he’s pretty good. A lot of that stuff was cut out, but he said some shit that wasn’t printable. 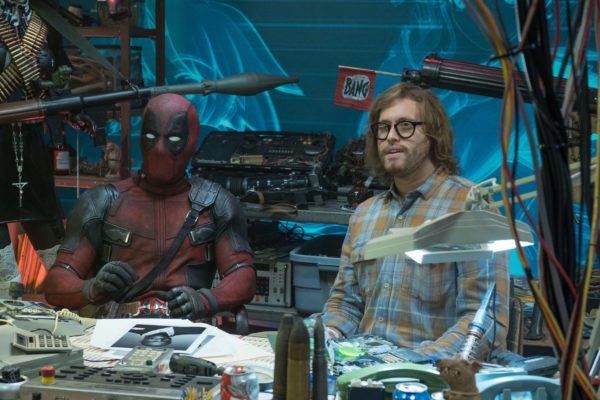 As a final question to round this up, you’ve been in the Disney-Marvel world, the Fox-Marvel world and you did DC a while back. Do you have any ideas of getting into the DCEU world to complete the set, as it were?

You never know what can happen, man. I love being involved with this now. If you would’ve said 10 years ago “would you want to be involved in Avengers and Marvel and all this stuff?” then I don’t know that I would’ve said yes. It’s a unique enough position within this world that, for some reason – and it’s even surprising me – I’m really satisfied with the whole position of it.

Is there a particular DC character you’d love to play?

No, there’s no character. I would love to play all characters! I’m going to be around for a while.

At the moment, multiplexes are full of Josh Brolin posters. Maybe you’ll be in every film like some sort of Being John Malkovich situation!

I know! It feels that way doesn’t it. #I’mSickOfBrolin! #EnoughOfBrolin!

Hopefully we’ll never get to that stage! Thank you so much and congratulations once again on the film!

Hopefully, man. Thanks a lot!