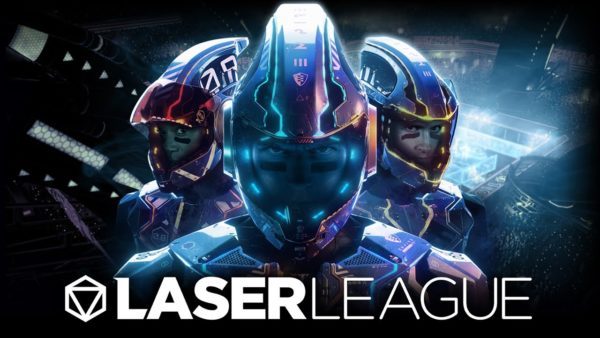 While calling any multiplayer sports title “the next Rocket League” is clearly intended as a term of endearment by fans and critics alike, it can have the unfortunate consequence of dooming a game to fall short of lofty, misplaced expectations (case in point, last year’s solid-but-already-forgotten Disc Jam). Though Laser League perhaps invites such remarks with its generically on-the-nose title, as a piece of left-field, hyper-competitive futuristic sports mayhem, it more than does the trick.

A common trait among the more successful, long-standing indie sports games is their effortless pick-up-and-play appeal, where even the least-instinctive players can have fun, while deceptive technical intricacies emerge for those who wish to take competition to the next level. This effort, from OlliOlli developers Roll7 Games, while not quite nailing the sweaty-palmed glory of the aforementioned king of the genre, is nevertheless one of its more creative additions as of late.

Matches in Laser League see two teams of suited-up future-humans racing around a grid while trying to activate as many neutral, white nodes as possible. Running over a neutral node will transform it into a moving laser barrier in your team’s colour, which you and your comrades can pass through, but if your rivals touch it, they’ll be dissolved on impact. The more nodes you can activate in your favour, the less room your opponents have to navigate the grid and avoid contact.

Any given match typically starts with a frantic rush for as many spawning nodes as possible, after which more nodes will appear along with special power-ups, enabling you to speed-up play, switch the node colours for maximum confusion, reset the grid entirely and countless more.

Eliminating the entire opposing team wins your team a point – with three points winning a set – though if you’re able to run over a teammate’s death marker, you can bring them back to life. Matches are two-out-of-three sets – with the losing team able to switch-up abilities between sets – and typically last around 10 minutes each. It’s fair to say that Laser League can seem a touch daunting when you start playing; though all the action transpires on a single, static screen, it’s easy to lose yourself in the sheer visual chaos that unfolds, especially when deep into a lengthy round against skilled players. Even with the core concept being so basic, the power-ups, half-dozen classes  – my personal favourite being Blade and his insta-kill death-slash – and additional modifiers players can choose from will quickly cause confusion if you’re not paying attention.

Like most enjoyable sports titles, though, there’s a point at which all this chaos clicks and you find yourself “in the zone”, so to speak. As your comfort with the power-ups and abilities increase – and it can certainly take some time to figure out which combinations work best for you and your team – you’ll find yourself taking dicier risks with tighter plays, inevitably resulting in both the most uproarious rewards and, yes, devastating heartbreaks.

It’s an addictive loop that, while not as easily explained to your pals as “it’s football with cars”, is nevertheless an intriguing, unexpected addition to the landscape. Whether it transpires into a livewire eSports hit remains to be seen, but it’s certainly considered enough to deserve a sizeable multiplayer community. With this, however, comes one especially unfortunate issue that, by no fault of the devs themselves, could hold Laser League back from greatness.

Playing the game on launch weekend on PS4, it would often take 3-5 minutes to get into a 3v3 match, with one or two spots eventually being filled by AI. It’s rather depressing for a critically acclaimed, low-cost competitive game on the weekend of release (and weekday testing wasn’t any better). This may be explained somewhat by Laser League also releasing on Xbox Game Pass, but given the PS4’s ludicrous install base, it’s a tad worrying that getting a game started is more of a chore than it should be. 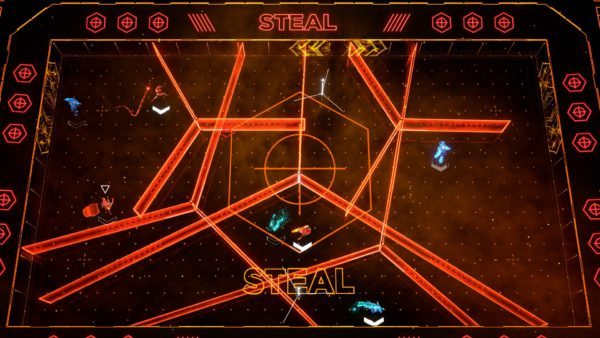 The lack of a 1v1 cage match is therefore pretty baffling as it would present a less-demanding matchmaking option, especially as 1v1 is already possible against the CPU in solo play. To that end, solo pickings are also disappointingly slim, with just some scant tutorials and bog-standard CPU matches up for grabs, and not even the now-typical tournament option available.

Those able to rope a few friends in for some local play may also be left miffed that the game doesn’t allow local parties to venture online together, an especially glaring oversight as all of Laser League‘s action is played out on a single screen. Fingers are firmly crossed that these issues may be patched in the future, but overall, this seemingly minor collection of gripes and omissions do make the game feel a little malnourished in the features department. It’s not a deal-breaker, but not exactly insignificant either.

Time will tell whether or not Laser League survives beyond its release window, but at least Roll7 can hold their heads up high that they’ve crafted a smooth, sharp sports curio that carves out a firm identity for itself, even accepting the fairly derivative Tron-esque visuals. They do at least pop pleasantly, and are accompanied by a suitably pulsing electronic musical score, while general performance is pretty faultless on PS4, bar a few moments where I was convinced the game should’ve awarded me the node and didn’t (or was that mere sour grapes on my part?).

Laser League isn’t a revolution for the genre, but it deserves plenty of credit for not just cynically rehashing the successes of its forebears and betting on a more inventive central gameplay loop. It is absolutely a game that, in a just world, will flourish in the multiplayer sports sphere for the foreseeable future, but since when was the world just?

In the very least, this is a shrewdly-priced, absurdly addictive proposition, so even if the community’s nothing more than a desiccated husk by the end of the summer, you’ve probably played your money’s worth by then.

Cons:
– Not as newbie-friendly as it could be.
– Virtually no solo content.
– Limited local multiplayer options.
– Lengthy matchmaking times are worrying.

Reviewed on PS4, tested on PC (also available on Xbox One).